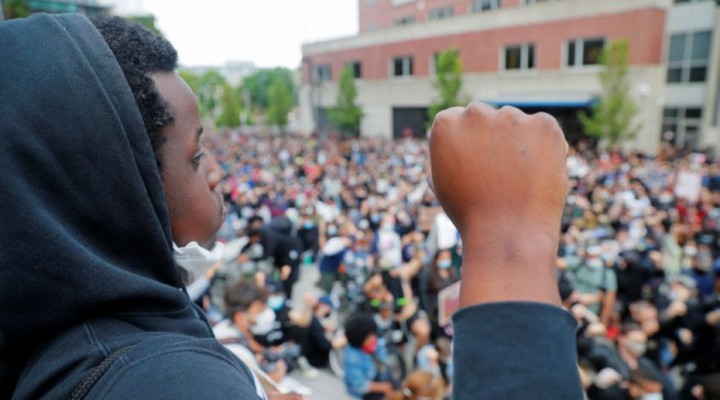 A hot humid day, but a gentle, warm breeze is blowing. The smoke and tear gas swirl gently to and fro, hanging in the dense, sweaty air, as shafts of dazzling sunlight scythe through the smokiness at sharp angles. A mass protest is forming. Youths are chattering; people moving aimlessly. It still has not solidified into purpose, yet the raw tenseness of the coming conflict hangs, as palpably as does the smoke in the air. It is evident – there will be violence today.

No, this is not America. This is the flashpoint crossroad between the radical Jewish settler outpost of Beit El in the West Bank, and its interface with the Palestinian town of Ramallah. Between the two, the Israeli army are ranged, awaiting the hostilities to commence. This was back, during the Second Palestinian Intifada; it was a time of near war, and I was present, charged with observing this, and other unfolding confrontations, on behalf of the EU.

As usual, I head to the back of the sprawling mob, for it is only from this perspective that one can understand the nature of events. You observe the silent organisation in action. Young men smoothly and unobtrusively, position the piles of stones that later would be hurled (mostly ineffectually) at the soldiers who are stood just beyond the range of stone-throwers. Then the protest managers are gone – vanished.

I know what is about to unfold. I have just seen two snipers (in this instance, Palestinians), slip into position, well-back, concealed on a hillside over-looking the crossroads. It is a sad sight – the young people massing before me are not dangerous; they generally are decent, sincere young people, angry at the expanding settler-occupation, and hyped by the ‘animators’ sent amongst the crowd to stoke emotions. They are not bad young people.

I am sad, because some, I know, will soon be dead, their families mourning a child’s loss tonight. But they are the fodder – innocent fodder – and this is war. At the height of confrontation, the snipers begin. Just a couple of rounds, but enough; they fire with silenced weapons. The Israelis soldiers cannot tell (unlike me), the source of the firing. A number of Palestinian youth fall dead; the mood incandescent. Purpose achieved.

Why do I write about these twenty-year old events? Because I know well the patterns. I have seen them often. It is a playbook widely used. And I see familiar tell-tales emerging in the videos posted on the current protests in America.

Most notable, are the ubiquitous palettes of bricks that mysteriously appear in the background to many videos of the protests (see here for a typical selection). Who is positioning them? Who is paying? U.S. commentator, Michael Snyder, too has noted the “complex network of bicycle scouts to move ahead of demonstrators in different directions of where police were, and where police were not, for purposes of being able to direct groups from the larger group to … where they thought officers would not be.”

He observes too, the anticipatory raising of bail money; the preparing of medical teams, ready to treat injuries; and of caches of flammable materials (suitable for torching official vehicles), pre-positioned in places where protests would later occur. All this – with simultaneous protests in more than 380 U.S. cities – in my experience, signals much bigger, silent backstage organization. And behind ‘the organisation’, the instigators lie, far back: maybe even thousands of miles back; and somewhere out there will be the financier.

However, in the U.S., commentators say they see no leadership; the protests are amorphous. That is not unusual to see no leadership – a ‘leadership’ appears only if negotiations are sought and planned; otherwise key actors are to be protected from arrest. The most telling sign of a backstage organisation is that on one day, it is ‘full on’, and the next all is quiet – as if a switch has been pulled. It often has.

Of course, the overwhelming majority of protestors in the U.S. this last week, were – and are – decent sincere Americans, outraged at George Floyd’s killing and continuing social and institutional racism. Was this then, an Antifa and anarchist operation, as the White House contends? I doubt it – any more than those Palestinian youth in Beit El constituted anything other than fodder for the front of stage. We simply don’t know the backstage. Keep an open mind.

Tom Luongo presciently suggests that should we wish to understand better the context to these recent events – and not be stuck at stage appearances – we need to look to Hong Kong for indicators.

Writing in October 2019, Luongo noted that: “What started as peaceful protests against an extradition law and worry over reunification with China has morphed into an ugly and vicious assault on the city’s economic future. [This is] being perpetrated by the so-called “Block Bloc”, roving bands of mask-wearing, police-tactic defying vandals attacking randomly around the city to disrupt people going to work”.

What is going on? Luongo quotes a September Bloomberg interview with HK tycoon, Jimmy Lai, billionaire publisher of the Chinese Communist Party (CCP) scourge, the Apple Daily, and the highly visible interlocutor of official Washington notables, such as Mike Pence, Mike Pompeo and John Bolton. In it, Lai pronounced himself convinced that if protests in HK turned violent, China would have no choice but to send the People’s Armed Police units from Shenzen into Hong Kong to put down unrest: “That,” Lai said on Bloomberg TV, “will be a repeat of the Tiananmen Square massacre; and that will bring in the whole world against China … Hong Kong will be done, and … China will be done, too”.

In brief, Lai proposes to ‘burn’ Hong Kong – to ‘save’ Hong Kong. That is, ‘burn it to save it’ from the CCP – to keep its residue in the ‘Anglo-sphere’.

“Jimmy Lai”, Luongo writes, “is telling you what the strategy is here. The goal is to thoroughly undermine China’s standing on the world stage and raise that of the U.S. This is economic warfare, it’s a hybrid war tactic. And the soldiers are radicalized kids in uniforms bonking old men on the heads with sticks and taunting cops. Sound familiar? Because that’s what’s going on in places like Portland, Oregon with Antifa … And that cause is chaos”. (Recall, Luongo wrote this more than six months ago).

Well, here we are today: Steve Bannon, closely allied with what he, himself, terms the U.S.’ China super-hawks, and allied with yet another Chinese billionaire financier, Guo Wengui (a fugitive from the Chinese Authorities, and member at Trump’s Mar-a-Lago Club), is pursuing an incandescent campaign of denigration and vitriol against the Chinese Communist Party – intended, like Lai’s campaign, to destroy utterly China’s global standing.

Here it is again – the tightly-knit band of U.S. and exile super-hawks want to ‘burn’ down the CCP, to ‘save’ what? To save the ‘Empire Waning’ (America), through ‘burning’ the ‘Empire Rising’ (China). Bannon (at least, and to his credit), is explicit about the risk: A failure to prevail in this this info-war mounted against the CCP, he says, will end in “kinetic war”.

So, back to the U.S. protests, and drawing on Luongo’s insights from Hong Kong – I wrote last week that Trump sees himself fighting a hidden global ‘war’ to retain America’s present dominance over global money (the dollar) – now America’s principal source of external power. For America to lose this struggle to a putative multi-lateral cosmopolitan governance – Trump perceives – would result in the whole, white Anglo-sphere’s ejection from control over the global financial system – and its associated political privilege. It would entail control of the global financial and political system slipping away to an amorphous multi-lateral financial governance, operated by an international institution, or some global Central Bank. Since before WW1, control of global financial governance has been in the hands of the Anglo-American nexus running between London and New York. It still does, just about – albeit that today’s Wall Street elite is cosmopolitan, rather than Anglo, yet still it is firmly anchored to Washington, via the Fed and the U.S. Treasury. For this to slip would be the ‘end of Empire’.

To maintain the status of the dollar, Trump therefore has assiduously devoted himself to disrupting the multi-lateral global order, sensing this danger to the unique privileges conveyed by control of the world’s monetary base. His particular concern would be to see a Europe that was umbilically-linked to the financial and technological heavy-weight that is China. This, in itself, effectively would presage a different world financial governance.

But, is the fear that the threat principally lies with Europe’s Soros-style vision justified? There may – just as well – be a fifth-column at home. The billionaires’ club of the very rich has long ceased to be culturally ‘Anglo’. It has become a borderless, ‘self-selecting’, governing entity unto itself.

Perhaps an earlier ‘end of Époque’ metamorphosis shows us how readily an old-established elite can swap horses in order to survive. In the historical Sicilian novel, The Leopard, Prince Salina’s nephew tells his uncle that the old order is ‘done’, and with it, the family is ‘done’ too, unless … “Unless we ourselves take a hand now, they’ll foist a republic on us. If we want things to stay as they are, things will have to change”.

It is clear that some billionaire oligarchs – whether American or not – can see the ‘writing on the wall’: A financial crisis is coming. And so, too, is a social one. A recent survey done by one such member, showed that 55% of American millennials supported the end to the capitalist system. Perhaps the brotherhood of billionaires is thinking that ‘unless we ourselves take a hand now, they’ll foist socialism on us’. If we want things to stay as they are, things will have to change. The recent disorder in the U.S. will have unnerved them further.

The push towards radical change – towards that global financial, political and ecological governance that threatens dollar hegemony – paradoxically may emerge from within: from within America’s own financial elite. ‘Burning’ the dollar’s privileged global status may become seen as the price for things to stay as they are – and for the elite to be saved. The future of Empire hangs on this issue: Can U.S. dollar hegemony be preserved, or might the financial ‘nobility’ see that things must change – if they to stay as they are? That is, the Revolution may come from within – and not necessarily from abroad.

In recent days, Trump has pivoted to being the President of ‘Law and Order’ – a shift which he explicitly connected to 1968, when, in response to protests in Minneapolis after the police suffocation last week of George Floyd, Trump tweeted: “When the looting begins, the shooting starts”. These were the words used by Governor George Wallace, the segregationist third-party candidate, in the 1968 Presidential election: Republicans launched their “southern strategy” to win over resentful white Democrats after the civil rights revolution.

Trump is determined to prevail – but today is not 1968. Can a Law and Order platform work now? U.S. demography in the south has shifted, and it is not clear that the liberal, urban electorates of America would sign up to a law-and-order platform, which implicitly appeals to white anxieties?

In a sense, President Trump finds himself between a rock and a hard place. If the protests are not quelled, and “the right normal (not) restored” (as per Esper’s words), Trump may lose those remaining ‘law and order’ conservatives. But, were he to lose control and over-react using the military, then it may be Trump who has his own ‘Tiananmen Square’ – one, which Jimmy Lai (gleefully) predicted in Hong Kong’s case would bring in the whole world against China: “Hong Kong will be done, and … China will be done, too.”