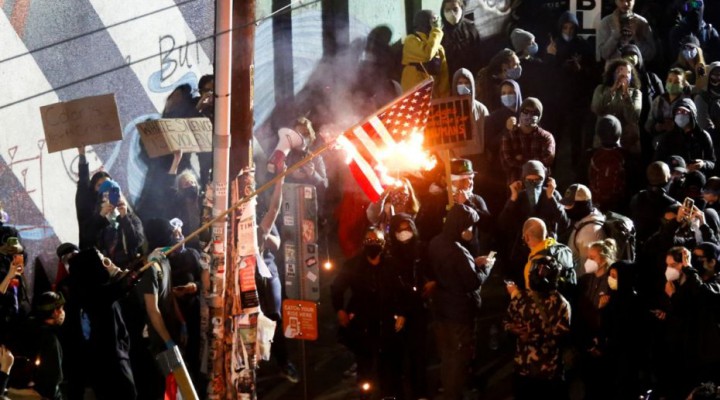 The marriage of post-Lockdown and George Floyd protests has nurtured a rough beast that is still immune to any form of civilized debate in the U.S.: the Seattle Commune.

Are the communards mere useful idiots? Is this a refined Occupy Wall Street experiment? Could it survive, logistically, and be replicated in NYC, L.A. and D.C.?

An outraged President Trump has described it as a plot by “domestic terrorists” in a city “run by radical left Democrats”. He called for “LAW & ORDER” (in caps, according to his Tweetology).

Shades of Syria in Seattle are visibly discernable. Under this scenario, the Commune is a remixed Idlib fighting “regime counter-insurgency outposts” (in communard terminology).

For most American Right factions, Antifa equals ISIS. George Floyd is regarded not only as a “communist Antifa martyr”, as an intel operative told me, but a mere “criminal and drug dealer”.

So when will “regime forces” strike – in this case without Russian air cover? After all, as dictated by Secretary Esper, it’s up to the Pentagon to “dominate the battlefield”.

It’s enlightening to observe that “counter-insurgency” can be applied in Afghanistan and the tribal areas; to occupy Iraq; to protect the looting of oil/gas in eastern Syria. But not at home. Even if 58% of Americans would actually support it: for many among them, the Commune may be as bad if not worse than looting.

But then there are those firmly opposed. Among them: the “Butcher of Fallujah” Mad Dog Mattis; color revolution practitioners NED; Nike;

Welcome to the Only Occupy Others movement.

Still the question remains: how long will “Idlib” be able to defy the “regime”? That’s enough to cause an alleged “bully”, Attorney General Barr, many a sleepless night.

Trump and Barr have already threatened to criminalize Antifa as a “terrorist organization” – even as Black Lives Matter has pointed a yellow dagger in the asphalt of 16th St. in D.C. towards the White House.

And that brings us to the across the board legitimacy enjoyed by Black Lives Matter. How’s that possible? Here is a good place to start.

Black Lives Matter, founded in 2013 by a trio of middle class, queer black women very vocal against “hetero-patriarchy”, is a product of what University of British Columbia’s Peter Dauvergne defines as “corporatization of activism”.

Over the years, Black Lives Matter evolved as a marketing brand, like Nike (which fully supports it). The widespread George Floyd protests elevated it to the status of a new religion. Yet Black Lives Matter carries arguably zero, true revolutionary appeal. This is not James Brown’s “Say It Loud, I’m Black and I’m Proud”. And it does not get even close to Black Power and the Black Panthers’ “Power to the People”.

The gold standard on civil rights, Dr. Martin Luther King, in 1968, concisely framed the – structural – heart of the matter:

“The black revolution is much more than a struggle for the rights of Negroes. It is forcing America to face all its interrelated flaws—racism, poverty, militarism, and materialism. It is exposing evils that are rooted deeply in the whole structure of our society. It reveals systemic rather than superficial flaws and suggests that radical reconstruction of society itself is the real issue to be faced.”

As summed up by the Panthers’ Minister of Information Eldridge Cleaver: “We believe in the need for a unified revolutionary movement … informed by the revolutionary principles of scientific socialism.” That synthesized the insights of MLK, who was, crucially, a proponent of color blindness.

Fred Hampton, the target of a de facto state assassination in December 1969, made sure the struggle transcended race: “We got to face some facts. That the masses are poor, that the masses belong to what you call the lower class, and when I talk about the masses, I’m talking about the white masses, I’m talking about the black masses, and the brown masses, and the yellow masses, too. We’ve got to face the fact that some people say you fight fire best with fire, but we say you put fire out best with water. We say you don’t fight racism with racism. We’re gonna fight racism with solidarity. We say you don’t fight capitalism with no black capitalism; you fight capitalism with socialism.”

So this is not only about race. This is not only about class. This is about Power to the People fighting for social, political and economic justice under a system that’s intrinsically unequal. It expands on the in-depth analysis by Gerald Horne in The Dawning of the Apocalypse, where the 16th century is fully dissected, “creation myth” of the U.S. included.

Horne shows how a bloodthirsty invasion of the Americas engendered fierce resistance by Africans and their indigenous populations allies, weakening imperial Spain and finally enabling London to dispatch settlers to Virginia in 1607.

Now compare this depth of analysis with the meek, almost begging for mercy “Black Lives Matter” slogan. One is reminded, once again, of Malcolm X’s sharpness: “We had the best organization the black man’s ever had—niggers ruined it!”

To solve the Black Lives Matter question, one must, once again, follow the money.

Black Lives Matter profited in 2016 from a humongous $100 million grant from the Ford Foundation and other philanthropic capitalism stalwarts such as JPMorgan Chase and the Kellogg Foundation.

The Ford Foundation is very close to the U.S. Deep State. The board of directors is crammed with corporate CEOs and Wall Street honchos. In a nutshell; Black Lives Matter, the organization, today is fully sanitized; largely integrated into the Democratic Party machine; adored by mainstream media; and certainly does not represent a threat to the 0.001%.

Try to set the night on fire

Set the Night on Fire is an extraordinarily absorbing book co-written by Jon Wiener and the inestimable Mike Davis of City of Quartz and Planet of Slums.

Cataloguing in exhaustive detail the L.A. of the Sixties, we are plunged into the Watts riots in 1965; the antiwar movement joining the Black Panthers to form a uniquely Californian Peace and Freedom Party; the evolving grassroots unity of the Black Power ethos; the Che-Lumumba club of the Communist Party – which would become the political base of legendary Angela Davis; and the massive FBI and LAPD offensive to destroy the Black Panthers.

Tom Wolfe notoriously – and viciously – characterized L.A. supporters of the Black Panthers as ‘radical chic”. Elaine Brown once again sets the record straight: “We were dying, and all of them, the strongest and the most frivolous, were helping us survive another day.”

One of the most harrowing sections of the book details how the FBI went after Panthers sympathizers, including the sublime Jean Seberg, the star of Otto Preminger’s Saint Joan (1957) and Godard’s Breathless (1960).

Jean Seberg contributed anonymously to the Panthers under the codename “Aretha” (yes, as in Franklin). The FBI’s COINTELPRO took no prisoners to go after Seberg, enrolling the CIA, military intel and the Secret Service. She was smeared as a “sex-perverted white actress” – as in having affairs with black radicals. Her Hollywood career was destroyed. She went into deep depression, had a stillbirth (the baby was not black), emigrated, and her – decomposed – body was found in her car in Paris in 1979.

In contrast, there have been academic rumblings identifying the sea of converts to the Black Lives Matter religion as mostly products of the marriage between wokeness and intersectionality – the set of interlinked traits that since birth privileges heterosexual white men, now trying to expiate their guilt.

Generation Z, unleashed en masse from college campuses across the U.S. into the jobs market, is a prisoner of this phenomenon: in fact a slave to – politically correct – identity politics. And once again, carrying zero revolutionary potential.

Compare it once again to immense political sacrifices of the Black Panthers. Or when Angela Davis, already a pop icon, became the most famous black political prisoner in American history. Aretha Franklin, when volunteering to post bail for Davis, famously framed it: “I’ve been locked up for disturbing the peace, and I know you’ve got to disturb the peace when you can’t get no peace.”

Elaine Brown: “I know what the BPP [Black Panther Party] was. I know the lives we lost, the struggle we put into place, the efforts we made, the assaults on us by the police and government – I know all that. I don’t know what Black Lives Matter does.”

It’s open to endless debate whether Black Lives Matter is intrinsically racist and even inherently violent.

And it’s also debatable whether taking a knee, now a household ritual practiced by politicians (complete with Kente scarves from Ghana), cops and corporations, really threatens the foundations of Empire.

Noam Chomsky has already ventured that the protest wave so far carries zero political articulation – and badly needs a strategic direction, far beyond the obvious revolt against police brutality.

The protests are dying down just as the Commune emerges.

Depending on its evolution that may pose a serious problem to Trump/Barr. The President simply cannot allow a running color revolution to develop in the middle of a major American city. At the same time he’s impotent as a federal authority to dissolve the Commune.

What the White House can do is to dog whistle its own counter-insurgency units, in the form of armed to their teeth white supremacist militias, to go on the offensive and crush the already flimsy supply lines of the wokeness-cum-intersectionality crowd.

Occupy after all took over key areas of 60 American cities for months just to suddenly dissolve into the ether.

Additionally, the Deep State has already war-gamed plenty of scenarios to deal with siege situations way more complex than the Commune.

Whatever happens next, one key vector is immutable. A state of permanent insurrection only benefits the 0.00001% plutocracy comfortably ensconced while the plebs set the night on fire.

0 thoughts on “Syria in Seattle: Commune Defies the U.S. Regime”