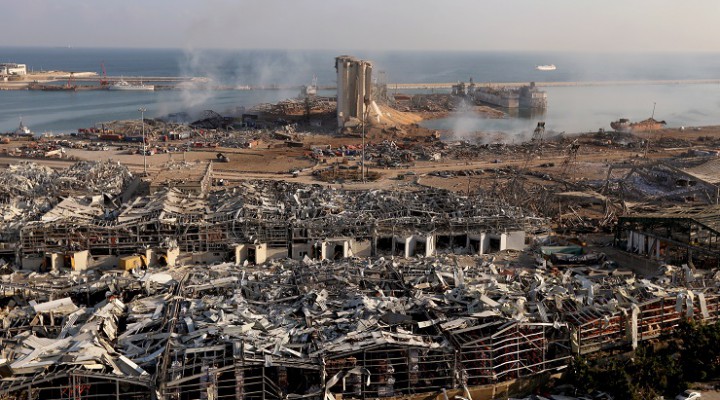 Wolf, one of Hollywood’s greatest powerhouses with an incredible lineup of top-rated shows, has, in the past, used his position to insert key messages vital to Israeli policy into what is supposed to be “entertainment.”

This week Wolf is selling ammonium nitrate as akin to nuclear weapons. There is a reason.

Stored ammonium nitrate is inert. It can’t burn, it can’t explode under any imaginable circumstance, and it can actually be used as a refrigerant when mixed with water.

You can make explosives with ammonium nitrate. It can replace bat droppings as a source of nitrates that can, when properly manufactured, be used for demolitions or as a propellant.

What ammonium nitrate can’t do, even if used as a component in the manufacture of highly complex compounds using certain metals and hydrocarbons, is explode down into bedrock.

That requires considerable professional engineering expertise or the use of weapons such as a nuclear bunker-buster bomb.

The Beirut crater has an analog in the American state of New Mexico. That crater was caused by a two-megaton hydrogen bomb test.

Thus, the two TV shows cited, one FBI and FBI International, promoted a false narrative in order to influence events.

This is done all the time.

What we do know is this, Israel used a nuclear weapon in Beirut on that hot August day. High ranking Lebanese defense officials contacted this author who submitted their evidence to the IAEA, the same group tasked with investigating Iran’s nuclear program.

The truth, that nuclear demolitions are used commonly in mining and fracking, is something withheld from the public “for their own good.”

Also, that ISIS (banned in Russia) had the materials to build five nuclear weapons at their research facility in Mosul is another open secret. Current weapons designs, also highly classified, allow for a nuclear chain reaction necessary for an explosion to be possible using commonly available radioactive material from junked X-Ray machines.

On at least three occasions, nuclear material was seized before reaching ISIS. This material originated in Ukraine.

What we are asserting is this, that using a common “track back” methodology common to intelligence analysis, these fictional television dramas, based on timing and content, also based on source, evidence things well known at certain levels in the international community.

“On Thursday’s program, the InfoWars host welcomed guest Robert David Steele onto The Alex Jones Show, which airs on 118 radio stations nationwide, to talk about kidnapped children he said have been sent on a two-decade mission to space.

‘We actually believe that there is a colony on Mars that is populated by children who were kidnapped and sent into space on a 20-year ride,’ said Steele. ‘So that once they get to Mars, they have no alternative but to be slaves on the Mars colony.’”

Steele, a longtime friend and editor at Veterans Today and former CIA clandestine services officer, told me that such narratives, though absurd, were to be disseminated in return for promised funding for a presidential run by Steele. It was Steele’s plan to surround himself with intelligence insiders once elected that could insulate America’s government from certain “destructive influences.”

Steele, who promoted vaccine hoaxes as well has since died of COVID-19.

To be clear, nuclear weapons have always been closely tied to terrorism. The concept of Mutually Assured Destruction (MAD) is, in itself, one that relies on fear, a key component of terrorist philosophy.

One cannot examine terrorism without looking at Gladio, the NATO sponsored Freemason organization that went rogue and has terrorized Europe and Latin America since the latter 1970s.

The desperation of losing the war for the “hearts and minds” of the world’s exploited and victimized drove the West during the Cold War to embracing state sponsored terrorism as a “military option.”

After 9/11, that ploy took on new aspects as nation after nation was subjected to military occupation based on a war on terrorist groups that could easily be tied to NATO and the CIA.

The natural progression of this now multigenerational endeavor has been to stage larger and larger “events.” When you can get away with vaporizing lower Manhattan or cratering Beirut and spinning an investigation into areas that torture science, anything is possible.

It is strange that no one seems to notice that nearly every major terrorist act of the past 30 years has led to a pre-planned response that has regime change as its central theme.

From a 2016 report by Robert Litwak of the Wilson Center, Deterring Nuclear Terrorism:

The rise of the Islamic State as an offshoot of Al Qaeda (banned in Russia) in Iraq and the stunning success of its military offensive to occupy territory in 2014 has transformed the regional security environment. ISIS’s control over a large swath of territory in Iraq and Syria, including the occupation of a major urban area like Mosul, confers technological and engineering assets of a magnitude traditionally only under the control of a state that could allow it to develop WMD capabilities.

A hyperbolic article in the Islamic State’s propaganda magazine, Dabiq, raised the “hypothetical” that ISIS, having seized banks with billions of dollars, could tap sympathizers in “Pakistan to purchase a nuclear device through weapons dealers with links to corrupt officials in the region.” The article proclaimed that the terrorist group was seeking “to pull off something truly epic.” This proclaimed intention underscores the necessity of denying the Islamic State the capabilities of a state. Such a strategy of deterrence by denial (as discussed in the “Recalibrating Deterrence” section below) would not eliminate the WMD threat posed by ISIS but would substantially reduce it.

Pathways to Nuclear Acquisition After the catastrophic terrorist attacks on 9/11, British Prime Minister Tony Blair declared that the only constraints on Al Qaeda’s obtaining and using a nuclear weapon were practical and technical, not political or moral. The same holds today for the Islamic State. What then are the routes by which a terrorist group could acquire a nuclear weapon?

The three broad pathways to nuclear weapons acquisition by a terrorist group are: (1) transfer—the deliberate handoff or sale of a weapon from a state; (2) leakage—an unauthorized transfer or theft of a weapon from an inadequately secured site; and (3) indigenous production—manufacture of a nuclear device from leaked weapons-grade fissile material and bomb components.”

Thus, we return to the issue of Beirut and a ridiculous official narrative sustained by the combined efforts of Israel and, to a lesser degree, Saudi Arabia, and their drive to suppress Iran’s influence in Lebanon.

On August 4, 2020, a massive explosion rocked Beirut. The Port of Beirut was destroyed entirely, hundreds were killed and nearly half a million people were homeless.

Investigations that will never be allowed to be seen by the general public give us a simple and believable narrative.

Only one week before, Israeli defense officials warned that they would destroy a major Lebanese infrastructure facility in order to suppress Iran and Hezbollah. From Israel Hayom, exactly five days before the attack:

A senior defense official told Israel Hayom that Gantz issued the order to prepare such a response during meetings on Thursday with IDF Chief of Staff Lt. Gen. Aviv Kochavi and other members of the general staff.”

Now we move the clock forward, to December 2021. Iran is, many hope, in the final stages of Vienna talks to end the Trump/Israel reimposition of sanctions that ended the JCPOA agreement that guaranteed Iran would remain without nuclear weapons capability.

A massive public relations effort, combined with behind-the-scenes activities, bribery, blackmail and violence, is aimed and undermining President Biden’s efforts to undo the damage to world security caused by this Trump move.

Where this is likely to play out over the coming weeks is in Vienna where the EU is pressuring President Biden to accept the position of Russia and China and rejoin the international community and reenter the JCPOA.

0 thoughts on “Was Beirut’s Destruction a Saudi-Israeli Preemptive Attack?”