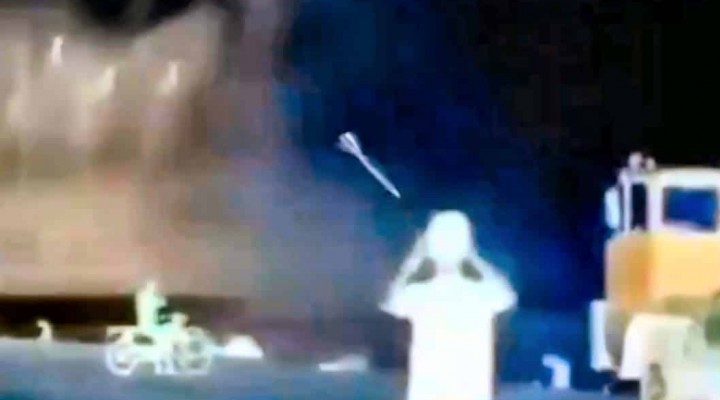 Now that Israel has openly joined with Erdogan, founder of ISIS and the deadly White Helmets, aided by MI 6, the MIT, CIA and Mossad against Russia; the real challenge to Biden awaits. Russia dropping the hammer on apartheid Israel, the rogue state that controls Washington, London, Kiev, Berlin, and which has powerful criminal allies across Russia as well.

VT: It seems like fertilizer seems to magically explode, despite being inert, whenever a coverup for a false flag is needed.  Fertilizer explosions in Yemen, Damascus, Khobar Towers, Bali, the Marine Barracks in Beirut, the town of West in Texas….so many others…Donbass….that or imaginary “rocket factories.”  All covering up use of new “salted” nukes or neutron bombs…

and then the bombings…

As recent as 2006, Lebanon was decimated by Israel.  The bomb wreckage is still there, hundreds of buildings in Beirut in ruins while Israeli planes, as on that the fateful day of the nuclear attack, buzzing the skies…most recently to fire rockets into Damascus, power plants, water facilities….oh….lets go “full zio” and say every bomb hits a hospital or orphanage….

Well…under pressure….the Lebanese Army…militarily much weaker than Hezbollah and reviled for allowing Israel to piss on Lebanon for decades….is speaking up….but what is not reported is that Lebanese officials have met with Russian military and political leaders in Damascus…negotiating an S400/S500/550 umbrella over their nation…after years of daily humiliation by the IAF…culminating in a daylight nuclear attack.

Now that Israel has openly joined with Erdogan, founder of ISIS and the deadly White Helmets, aided by MI 6, the MIT, CIA and Mossad…against Russia and in particular Crimea…the real challenge to Biden awaits…Russia dropping the hammer on apartheid Israel…the rogue state that controls Washington, London, Kiev, certainly Berlin…and has powerful criminal allies across Russia as well…

A picture taken on Aug. 16, 2021 shows an observation tower of United Nations Interim Force in Lebanon (UNIFIL) near the Israeli military base of Har Dov. (Photo by AFP)

The Lebanese army has called on the United Nations to act urgently to end the Israeli regime’s repeated violations of the Arab country’s sovereignty and airspace to carry out airstrikes in neighboring Syria.

During a meeting between Head of the United Nations Interim Force in Lebanon (UNIFIL) Major General Stefano Del Col and a Lebanese army delegation headed by Brigadier General Haseeb Abdo at the UN headquarters in Ras Naqoura in southern Lebanon on Friday, the Lebanese side asked the world body to pressure Israel to stop its hostile practices, especially the use of Lebanon’s airspace to bomb Syrian lands and its continued violations of Lebanese sovereignty by land, sea and air.

The Lebanese army delegation warned of dangerous consequences if Israeli warplanes continue to penetrate into the country’s airspace.

Israeli fighter jets and gunboats have violated the Lebanese airspace and territorial waters in flagrant violation of a UN Security Council resolution.

It also reaffirmed Beirut’s commitment to international resolutions, especially Security Council Resolution 1701 which ended the 33-day-long Israeli military onslaught on the country in the summer of 2006.

The Lebanese army then stressed the need for Israel to withdraw from all occupied Lebanese territories, including the area adjacent to the northern part of the Blue Line, Shebaa Farms as well as Kfarchouba and Ghajar villages.

Lebanon’s government, Hezbollah and the UNIFIL have repeatedly condemned Israel’s overflights, saying they are in clear violation of UN Security Council Resolution 1701 and the country’s sovereignty.

Back on September 30 last year, fighters from Hezbollah intercepted and shot down an Israeli unmanned aerial vehicle while it was hovering over the southern part of Lebanon.

Hezbollah says it shot down an Israeli drone over southern Lebanon, and the aircraft fell within the Lebanese territory.

Hezbollah said in a brief statement carried by Lebanon’s Arabic-language al-Manar television network that it downed an Israeli drone that had entered the Lebanese skies with “appropriate weapons.”

The statement added the Israeli aircraft was brought down as it was flying over Maryamin valley on the outskirts of the southern town of Yater.

Vice President of the Executive Council of the Lebanese resistance movement Hezbollah Sheikh Ali Damoush stressed that US-mediated talks between Lebanon and Israel regarding a dispute over their Mediterranean Sea border will not result in normalization and establishment of formal ties with the Tel Aviv regime.

Addressing worshipers during a sermon of Friday prayers, Sheikh Damoush underscored that the Lebanese representatives must never accept US initiatives that would not conform to Lebanon’s rights.

Beirut and Tel Aviv resume indirect negotiations on the demarcation of Lebanon’s southern maritime border with the occupying entity.

“The US delegation is trying to blackmail Lebanon and exploit its economic crisis in order to wring concessions out of Lebanese officials attending the maritime border talks,” he pointed out.

Lebanese politicians hope that commercially viable hydrocarbon resources off Lebanon’s coast could help lift the debt-ridden country out of its worst economic crisis in decades.

In February 2018, Lebanon signed its first contract for drilling in two blocks in the Mediterranean with a consortium comprising energy giants Total, Eni and Novatek.

The sixth round of talks which was supposed to be held on Wednesday morning was postponed to “a not yet specified date.”

Lebanon and Israel took part in indirect talks to discuss demarcation in 2020. But they stalled after Lebanon demanded a larger area, including part of the Karish gas field, where Israel has given exploration rights to a Greek firm.

The talks were supposed to discuss a Lebanese demand for 860sq km (330 square miles) of territory in the disputed maritime area, according to a map sent to the United Nations in 2011.

However, Lebanon then said the map was based on erroneous calculations and demanded 1,430sq km (552 square miles) more further south, including part of Karish.