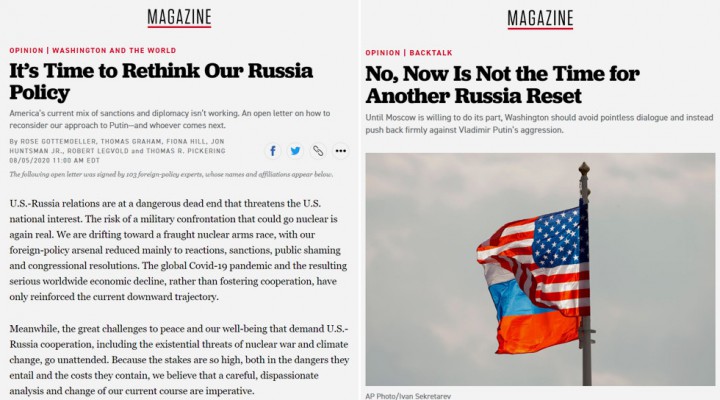 Some 136 American “experts” on US-Russian relations recently debated the merits of “rethinking” US policy on Russia. What these specialists failed to consider is that Moscow may not be interested in their plans.

In the span of a week, Politico, a non-partisan global news and information company whose stated mission is “providing accurate, nonpartisan impactful information to the right people at the right time,” published two pieces that addressed the topic of US-Russian relations.

The first, which appeared on August 5, was an “open letter” written by Russia policy heavyweights Rose Gottemoeller, Thomas Graham, Fiona Hill, Jon Huntsman Jr., Robert Legvold and Thomas Pickering, and signed on by 97 other prominent policy makers and academics, including George Shultz, William Perry and Sam Nunn. Entitled “It’s Time to Rethink Our Russia Policy”, the letter opined that the current mix of sanctions and diplomacy put forward as policy by the US wasn’t working, and that it was time for Washington to take a new approach toward the “problem” of Vladimir Putin’s Russia.

Six days later, Politico published a response written by 33 other Russian policy specialists, academics and journalists who took umbrage at the letter’s notion. Entitled “No, Now Is Not the Time for Another Russia Reset”, the article instead postulated that a Putin-led Russia represented a threat to American “interests and values” that required “strong pushback” rather than renewed diplomacy. While the authors of this piece acknowledge that “America’s ability to bring about change in Russia might be very limited”, any failure on the part of the US to aggressively push back against “Russia’s repression, kleptocracy and aggression” would fail to incentivize President Putin to the kind of “change” needed before any betterment of relations could occur.

On the surface, the 136 “experts” on US-Russian affairs who either wrote or endorsed these competing opinion pieces appear to have the issue of a US-Russian policy “rethink” covered from all angles. The one thing the authors of both articles have in common, however, is a tendency to view the issue from a US-centric point of view, with little or no regard as to how Russia feels about the concept of any “rethinking”—especially along the lines suggested.

What the supporters of a US-Russian “rethink” and those who oppose it insist on is the idea that Russia would either willingly assume the kind of supine posture any such “rethink” would be predicated on, or that the policy tools used to compel change, built around enhanced economic sanctions, diplomatic isolation and regional push back, would be sufficient to complete the task.

What these so-called “experts” fail to recognize is that the days of an “inferior” Russia aspiring to join the ranks of the “superior” West are gone forever. The image of the “shining city on a hill” that American exceptionalism is built upon  no longer inspires as it once did. America’s reputation around the world is on a downward trajectory—in 2016, some 64 percent of the populations of 33 countries surveyed by the Pew Research Center had a favorable impression of the US, in 2020, this had fallen to 53 percent (note: the Pew survey did not include many nations, such as those in the Middle East, where the perception of the US is much lower, and as such represents a upwardly skewed result). The idea that America is the most powerful, influential nation on earth is no longer universally held. Moreover, in Russia only 20 percent have a positive impression of the US—not exactly a vote of confidence.

The American-led “liberal world order” that has dominated the globe since the end of the Second World War is, from the Russian perspective, “obsolete”, and membership of the same is no longer viewed as attractive. Indeed, Russia has eschewed the notion of rejoining the G-8, noting that the G-7 is irrelevant without the presence of global economic powers such as Brazil, China, India and Turkey, and that the G-20 forum—which includes these nations, and more—is a far more suitable one for Russia.

It is not just the world that is rejecting American leadership—its own population has lost faith. A scant 52 percent of Americans embraced the vision of a “shining city on a hill” when President Ronald Reagan gave voice to it in his farewell address in 1989; today some 62 percent believe America no longer serves as an object of emulation for the other nations of the world. The Covid-19 pandemic has exacerbated a brewing socio-economic-political crisis of identity in the US, exposing a fundamentally flawed healthcare system, a labor market operating void of a safety net and race relations that appear to be getting worse, rather than better.

The fixation on the 2016 US Presidential election, and the notion that Russia somehow put its thumb on the electoral scale to enable an otherwise improbable President Donald Trump victory, represents the manifestation of this lack of confidence, as Americans desperately search for someone other than themselves to blame for the failures of its democratic institutions.

Robert Mueller, the Special Prosecutor responsible for the eponymously named report on Russian interference in the aforementioned election, alleged that Russian internet “troll farms” had, at their peak, a monthly budget of $1.25 million for targeted advertising on US social media. This figure was pure allegation, with Facebook stating it found that Russian-affiliated accounts spent a mere $100,000 on advertisements.

In any event, whatever the amount was, the notion that any amount of Russian-derived digital advertising helped sway an election where the major candidates spent in excess of $1 billion dollars on social media-based advertisements is laughable. By way of comparison, Mike Bloomberg spent over $500 million running the most sophisticated advertising campaign in the history of US electoral politics in a losing bid for the 2020 Democratic nomination. That the psyche of the average American voter can be swayed by what he or she reads online is insultingly simplistic; most voters are well informed on the issues of concern to them, know who they want to vote for and why. The last thing they need is online click-bait to tell them what to do.

This reality appears to be lost on those involved in the Russian “reset” debate, where both sides appear to be particularly sensitive to the fragility of American democracy, and desperate to allocate blame for this disturbing truth on a manufactured Russian threat rather than focus on a failing American society.

The foundation of the Russia “reset” debate, whether pro or con, is centered on the restoration of American supremacy, and has little to do with the actual improvement of diplomatic relations. Those who oppose the reset lay out a litany of issues where the US and Russia disagree. In every instance, the issues involved are not discussed on their merits, but rather a zero-sum analysis built around the concept that if it is good for Russia, it is bad for the US. Even the reset proponents seek to restore a Cold War approach toward diplomacy and détente, because this is safe ground built on the premise that the US will once again prevail.

The need to be seen as victorious is, of course, driven by the defensive stance taken by one-time policy professionals whose entire careers were predicated on either the defeat of the Soviet Union or, following its collapse in 1991, the containment of a much-diminished Russia. The notion of an ascendant Russia at a time when the US is on the decline both at home and abroad is simply unacceptable.

For the supporters of a Russian “rethink”, this situation is best accomplished by an engagement that resets US-Russian relations according to a Cold War-era road map. For the anti-reset crowd, the present reality must be avoided at all costs by seeking to compel Russian behavior through the application of Cold War-like pressure built around sanctions and a combination of military and diplomatic pressure.

Even if the American “experts” were able to come to an agreement on how best to proceed vis-à-vis Russia, there is virtually no chance Russia would play along. The main reason for this is that Russia has seen this game played before and is fully cognizant of the cost of doing business with the US in a post-Cold War reality. The debasement of Boris Yeltsin—and by extension, Russia—at the hands of Bill Clinton is a matter of public record, as is the role played by the US in writing Russia’s post-Soviet Constitution and securing Yeltsin’s reelection in 1996.

Russia knows that when the US uses terms like “reset” or “rethink” regarding Russia, it is with a mind to return US-Russian relations to such a status, where Russia lay prostrate at the feet of the US, and Putin did not hold the reins of power.

The former US Ambassador to Russia, Michael McFaul, embraced a vision of the “reset” undertaken by President Obama that was predicated on similar conditions, which is why it failed (McFaul did not sign either letter published by Politico). While the US can engage in an intramural debate about US-Russian policy, Russia will continue to do what it has for the past six years—proceed unencumbered by the baggage of American demands, and increasingly impervious to the threat—and reality—of US sanctions and diplomatic containment.