HOME / WORLD / What will be the foreign policy of the next US President? 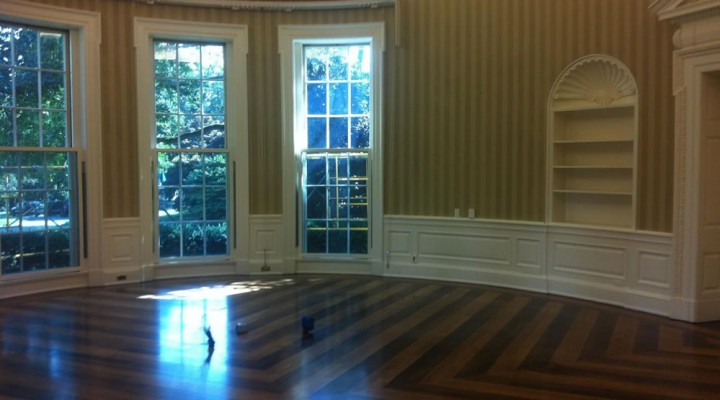 The two programs for the Trump and Biden candidacies are not similar to those of previous candidates. It is no longer a question of adjusting the United States to the changing world, but of defining what they will be. The question is existential, so it is quite possible that things will degenerate and end in violence. For some, the country must be a nation at the service of its citizens, for others it must restore its imperial status.

On the one hand, Washington’s claim to dominate the world by “containment” – a strategy articulated by George Kennan in 1946 and followed by all presidents until 2016 – and on the other hand, the rejection of imperialism and the desire to facilitate the fortunes of Americans in general – a strategy articulated by President Andrew Jackson (1829-37) and taken up only by President Donald Trump (2017-20).

Each of these two camps wields rhetoric that masks its true practice. Democrats and Republicans pose as heralds of the “free world” in the face of “dictatorships”, as defenders of racial, gender and sexual orientation discrimination, and as champions of the fight against “global warming”. The Jacksonians, for their part, take turns denouncing the corruption, perversity and ultimately hypocrisy of their predecessors while calling to fight for their nation and not for the empire.

The two camps have in common only the same cult of force; whether it is at the service of the empire (Democrats and Republicans) or the nation (Jacksonians).

The fact that the Jacksonians unexpectedly became a majority in the country and took control of the Republican Party adds to the confusion, but should not confuse trumpism with what the Republican ideology has been since World War II.

In reality, Democrats and Republicans tend to be well-to-do people or professionals in new technologies, while Jacksonians – like the “yellow vests” in France – are rather poor and professionally tied to the land from which they cannot escape.

For the 2020 campaign, Democrats and Republicans are united behind former Vice President Jo Biden. He and his supporters are extremely voluble about their intentions:

“A Statement by Former Republican National Security Officials”, Voltaire Network, 20 August 2020.
On the contrary, Donald Trump is evasive in writing:

“Donald Trump Second Term Agenda”, by Donald Trump, Voltaire Network, 24 August 2020 (foreign policy is the small paragraph at the end of the text).

In my view, the main disputes are not stated, but are constantly implied. 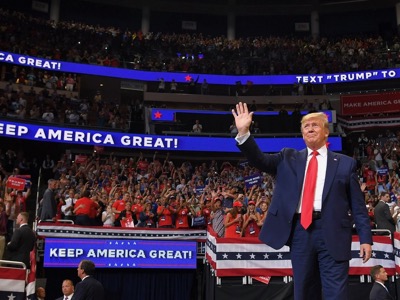 As a television host, Donald Trump dreamed of giving the country back to the people as President Andrew Jackson did.

As soon as he took office, Donald Trump questioned the Rumsfeld/Cebrowsky strategy of annihilating the state structures of all the countries of the “Broader Middle East” without exception and announced his wish to bring home the troops lost in the “war without end”. This goal remains at the top of his priorities in 2020 (“Stop Endless Wars and Bring Our Troops Home”).

As a result, he excluded the Director of the CIA and the Chairman of the Chiefs of Staff Committee from regular meetings of the National Security Council. In so doing, he deprived the supporters of imperialism of their main tool of conquest.

There followed a battle for the presidency of this council with the indictment of General Michael T. Flynn, then his replacement by General H. R. McMaster, the exceptionalist John R. Bolton, and finally Robert C. O’Brien.

In May 2017, Donald Trump called on U.S. allies to immediately cease their support for jihadists charged with implementing the Rumsfeld/Cebrowski strategy. This was the Riyadh speech to the Sunni heads of state and then to NATO heads of state and government. President Trump had declared NATO obsolete before changing his mind. However, he obtained not the abandonment of Russia’s policy of containment, but the halving of the credits used for this purpose and the allocation of the funds thus preserved to the fight against jihadism. In doing so, it partially stopped making NATO an instrument of imperialism and turned it into a defensive alliance. It has therefore demanded that its members contribute to its budget. Support for jihadism, however, was pursued by the supporters of imperialism with private means, notably the KKR Fund.

Hence his watchwords: “Wipe Out Global Terrorists Who Threaten to Harm Americans” and “Get Allies to Pay their Fair Share.

Like the Democrats and Republicans, the Jacksonian Donald Trump is committed to restoring the capabilities of his armies (“Maintain and Expand America’s Unrivaled Military Strength”). Unlike his predecessors, he did not seek to transform the Pentagon’s delusional management by privatizing one department at a time, but rather developed a plan to recruit researchers to compete technologically once again with the Russian and Chinese armies.

Only Donald Trump’s desire to regain primacy in missile matters is supported by Democrats and Republicans, although they do not agree on how to achieve it (“Build a Great Cybersecurity Defense System and Missile Defense System”) : the tenant of the White House wants the USA to equip itself alone with these weapons that it can eventually deploy on the territory of its allies, while its opponents want to involve the allies in order to maintain their hold on them. From the point of view of the Democrats and Republicans, the problem is obviously not withdrawing from the Cold War disarmament treaties to build a new arsenal, but the loss of means of diplomatic pressure on Russia.

The program of Democrats and non-party Republicans

Reinvigorate democracy: in his words, this means basing public action on the “informed consent” of Americans. In doing so, he used Walter Lipmann’s 1922 terminology, according to which democracy presupposes “manufacturing consent”. This theory was discussed at length by Edward Herman and Noam Chomsky in 1988. It obviously has nothing to do with the definition formulated by President Abraham Lincoln: “Democracy is government of the people, by the people, for the people”.

Joe Biden believes he is achieving his goal by restoring the morality of public action through the practice of “political correctness”. For example, he condemns “the horrible practice [of President Trump] of separating families and placing the children of immigrants in private prisons,” without saying that President Trump was merely applying a democratic law to show its futility. Or he announces that he wants to reaffirm the condemnation of torture that President Trump justified, without saying that the latter, like President Obama, has already banned the practice while maintaining life imprisonment without trial in Guantánamo.

He announced his intention to convene a Summit for Democracy to fight against corruption, to defend the “Free World” against authoritarian regimes, and to advance human rights. In view of his definition of democracy, it is a question of uniting allied states by denouncing scapegoats for what is wrong (the “corrupt”) and promoting human rights in the Anglo-Saxon sense and especially not in the French sense. That is to say, to stop police violence and not to help citizens to participate in decision-making. This summit will launch an appeal to the private sector so that new technologies cannot be used by authoritarian states to monitor their citizens (but the USA and its NSA can always use them in the interest of the “Free World”).

Finally, Joe Biden concludes this chapter by highlighting his role in the Transatlantic Commission for Electoral Integrity alongside his friends, former NATO Secretary General Anders Fogh Rasmussen, who overthrew the Libyan Arab Jamahiriya, and Michael Chertoff, former US Secretary of Homeland Security, who put all US citizens under surveillance. Not forgetting John Negroponte who organized the Contras in Nicaragua and Daesh in Iraq.

Educating the middle class to cope with globalization. Joe Biden believes that the politics that have been pursued since the dissolution of the USSR have led to the rapid disappearance of the middle class, and that training the remaining middle class in the use of new technologies will prevent the relocation of their jobs.

Renewing U.S. leadership. In the name of democracy, this means stopping the rise of “populists, nationalists and demagogues. This formulation helps us understand that democracy, according to Joe Biden, is not only the fabrication of consent, but also the eradication of the popular will. If demagogues pervert democratic institutions, populists serve the popular will and nationalists serve the community.

Joe Biden then specifies that he will stop wars “forever”; a formulation that seems to support the same goal as the Jacksonians, but differs in terminology. It is in fact a question of validating the current adaptation of the system to the limits imposed by President Trump: why make US soldiers die abroad when one can pursue the Rumsfeld/Cebrowski strategy with jihadists at a lower cost? All the more so since when he was only an opposition senator, Joe Biden gave his name to the plan to partition Iraq that the Pentagon was trying to impose.

A verse follows on the enlargement of NATO to include Latin American, African and Pacific allies. Far from being obsolete, the Alliance will once again become the heart of U.S. imperialism.

Finally, Joe Biden pleads for the renewal of the 5+1 agreement with Iran and disarmament treaties with Russia. The agreement with President Hassan Rohani aims to classically divide Muslim countries into Sunni and Shia, while the disarmament treaties aim to confirm that the Biden administration would not envisage a global confrontation, but the continued containment of its competitor.

The program of the Democratic Party candidate and non-party Republicans concludes with the assurance of joining the Paris Accord and taking leadership in the fight against global warming. Joe Biden specifies that he will not give gifts to China, which is relocating its most polluting industries along the Silk Road. On the other hand, he omits to say that his friend, Barack Obama, before entering politics, was the drafter of the statutes of the Chicago Carbon Emissions Trading Exchange. The fight against global warming is not so much an ecological issue as a matter for bankers.

It must be said that everything is opposed to a clarification. Four years of upheavals by President Trump have only succeeded in replacing the “endless wars” with a low-intensity private war. There are certainly far fewer deaths, but it is still war.

The elites who enjoy imperialism are not ready to give up their privileges.

So it is to be feared that the U.S. will be forced to go through an internal conflict, a civil war, and break up like the Soviet Union once did.

0 thoughts on “What will be the foreign policy of the next US President?”