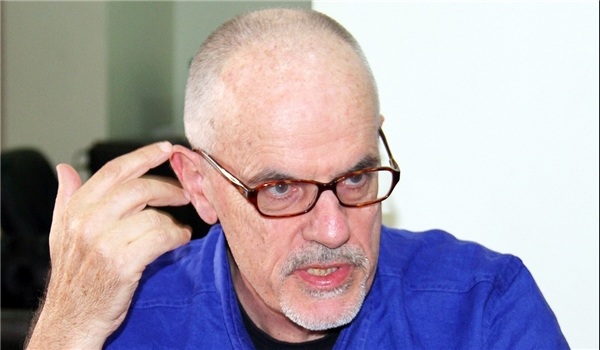 Tim Anderson, Australian academic and activist, says Washington has shown no signs of any currents to play a constructive role in Israeli-Palestinian conflict, as neither Trump nor his predecessors’ administrations minded Israeli land grabbing nor “ethnic cleansing” in the West Bank or Gaza.

In an exclusive interview with FNA, Dr. Anderson also made comments on Arab League’s condemnation of the US Golan move, saying while its members seek to establish ties with Israel, the bloc cannot call for action against Washington’s move.

Tim Anderson, Ph.D., is an Australian academic and activist. He was a senior lecturer at the University of Sydney and the author of several books on independent development and anti-imperialism.

Below is the full text of the interview:

Q: The Arab League, for many years, has failed to take any meaningful move with regard to the Israeli-Palestinian conflict. How do you view the bloc’s condemnation of Washington’s move to recognize Israeli “sovereignty” over the Golan Heights?

A: The Arab League disgraced itself some years back by supporting attacks on two members, Libya and Syria. I doubt if they can regain credibility, especially due to the increased role of the [P]GCC in the League. They did formally reject Tel Aviv’s attempt to annex the Golan, and called “invalid and illegitimate” Trump’s move to recognize that annexation. They also, once again, rejected the Zionist occupation of the West Bank and called for a Palestinian state. Yet in neither case was there any call for action. In diplomatic terms they did no more than the European Union, which also unanimously rejected the Golan annexation. Hezbollah praised the statement of Lebanon President Michel Aoun but said that the Arab League position “failed to match the seriousness” of the situation. The Resistance group also noted the movement of some League and [P]GCC members towards closer relations with Israel.

Q: The US claims its “Deal of the Century” brings the Israeli-Palestinian conflict to an end. Does Washington’s recent move dispute its own claim?

A: The Palestinian Authority has engaged with the US, but it has failed to show any real leadership or advance on the question of ‘negotiations’. That is why there is much disillusionment with the PA within Palestine. The most recent Jerusalem Media and Communications Centre polls in August and October of 2018 show that 82% of Palestinians saw “widespread corruption in the Palestinian Authority institutions and services”, while the percentage of those who trust President Mahmoud Abbas ranged between 10 and 11% in 2018. On the US-led ‘negotiations’ more than 80% saw no acceptable benefit for Palestinians in President Trump’s much hyped ‘Deal of the Century’. More broadly, only 12% said the Oslo accords of 1993 had “served Palestinian national interests”. So public opinion on both the PA and the US is very dim. Neither the Obama nor the Trump administration has been able to place the slightest constraint on the steady land theft and ethnic cleansing in the West Bank, nor have they stopped the murderous attacks on Gaza. It is principally local Palestinian resistance, in all its forms, which has slowed Zionist expansion. The Israeli entity has been blocked in the north by the Lebanese resistance and in the south by the resistance from Gaza. Now the north east expansion is in play. The West Bank has been flooded with colonies, destroying any possibility of making it the potential core of an Arab state. That in turn has led to an apartheid state – a crime against humanity. While there is a popular international movement in favor of this, there are no signs of any currents in Washington which could play a constructive role. For these reasons, even before President Trump, the US role in Palestine must be viewed as inimical and dangerous.

Q: How is the US’s global role viewed after Trump’s proclamation of Israeli “sovereignty” over the Golan Heights?

A: Washington, under President Trump, has acted in an increasingly unilateral manner and has therefore become more isolated. That is the contribution of the crude ‘realism’ of the Trump regime. Tearing up the JCPOA agreement with Iran, then penalizing third parties who wished to do business with Iran, has alienated Europe. Combined with the trade war on China and sanctions on Russia, Trump’s unilateral aggression has forced former allies to look for more independent financial and trade channels. Trump’s regressive role on climate agreements and withdrawal from a strategic arms limitation agreement with Russia further undermines any presence at a leading US role in the world. All this is before we come to the hybrid wars practiced against at least nine Middle Eastern states and peoples (Palestine, Lebanon, Afghanistan, Iran, Iraq, Libya, Syria, Yemen and Bahrain), and several more underway in Latin America (against Venezuela, Nicaragua, Cuba and Bolivia). The US has its special military forces in all regions, including Europe and Africa. Under the pretext of ‘fighting terrorism’ they have become the greatest sponsors of terrorism. They pose a great threat to the world.