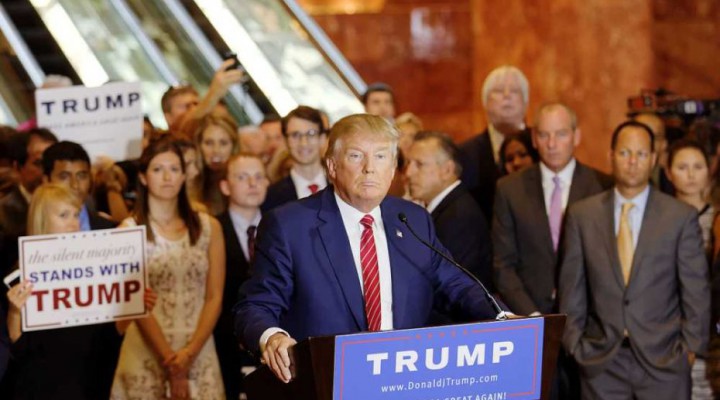 Iran’s calculus implicit in its messaging is that Trump does not want a war, and Iran does not want war either; but to avoid ‘war’, Trump needs to respect Iran’s ‘red lines’. In short, he must react ‘rationally’, and distance himself from Bolton.

Is Trump’s ‘maximum pressure’ doctrine approaching the end of its natural life?  Trump does not seem to think so: “Call me” (when the pain becomes too great), he tells all the besieged and sanctioned parties.  Reportedly, he has even sent Tehran a phone number via the Swiss Embassy – but Tehran will not be using it.

But this wait-and-see period seems to be coming to a somehow synchronous ending: It has had no results, for all the rhetorical hype. Notably, China seems has switched from an emollient mode and tone, to one of gathering its people behind a painful, yet necessary strategic struggle. North Korea too, seems to be nearing the end of its patience with negotiations that go nowhere; and now Iran is signalling (like the others), that to sit passively, is not an option – whilst the US pursues maximum pressure with no cost to itself. We begin the phase then, in which these states are ready and willing to impose asymmetric costs on Trump.

The evident danger to this maximum leverage strategy – which may have worked well in Trump’s NY real estate environment – is that in geo-politics, cornering your adversary completely, until his surrender ‘call arrives’, has obvious flaws: First is that surrender likely means political – or literal – extinction for the counterpart leader.

And secondly, patient vultures such as John Bolton never doubted that Trump’s strategy would never work. To be fair, Bolton is entirely explicit about this. There is no subterfuge. He just doesn’t believe that North Korea will ever relinquish its nuclear arsenal through negotiations; and nor does he believe that the Iranian leadership will ever change its nature. Logically therefore, only regime change will bring about the type of alteration on which Bolton insists: i.e. compliancy to US interests.

Bolton and his like-minded associates understand that they must patiently wait until Trump tires of sitting by his phone, and it becomes obvious to all that his ‘date’ has ‘ghosted him’. In the meantime, though, Bolton associates (such as Israel) fill the ‘wait-and-see’ period working quietly to hype the media with a news feed of steadily mounting ‘threats’ from America’s adversary of choice. Satellite photos ‘proving’ that the other side is treacherous is a favourite.

And so, Iran has passed now to the stage of messaging Washington that it will not accept to passively endure the costs of ‘maximum pressure’ on its populace – in an exercise for Washington that is essentially pain-free, and which therefore may be prolonged indefinitely. Iran is seeking to set boundaries.

Earlier this month, Palestinian Islamic Jihad fired missiles from Gaza that Israel did not know that they possessed. These killed five Israelis, and revealed some ineffectiveness in Israel’s vaunted Iron Dome anti-missile system. On 12 May, a number (some ambiguity remains about how many) of tankers off the coast of Fujaira were entirely disabled by damage to their steering system. And, two days later, drones attacked two oil pumping stations (severing the passage of some 3 million barrels of oil per day) traversing along the East-West pipeline between the Eastern Provinces and the west of Saudi Arabia.

These three separate events may or may not be linked; they may or may not involve Iran (Iran denies involvement); but nonetheless they constitute powerful messages to the three main protagonists supporting the ramping up of pressures against Iran: the UAE, Saudi Arabia and Israel. The key message is that pain can be reciprocal.

This trio of messages does more than warn that pressures on Iran can result in the asymmetric experience of pain for others – It takes a leaf out of Trump’s Art of the Deal. Just as Trump has been taking Palestinian ‘cards’ off the table (Jerusalem, the Golan, settlement land annexation and denying refugees their right of return), these three ‘messages’ in turn, weaken Trump’s ‘cards’ in respect to his maximum pressure policy on Iran,  by putting into question regional support for any further US escalation against Iran: Will the al-Saud – now experiencing a renewed purge and crisis within the family – feel sufficiently secure to weather US escalation against Iran?  Will the UAE reflect on its own crude vulnerability? And is Israel made nervous by the thought of what a wider conflict in the region might bring in terms of missile capabilities (after only the merest reminder by Islamic Jihad)?  And is Trump so sure now that the market in oil can be finessed to avoid any hike in US gasoline prices?  The cards have been reshuffled.

This trifecta of signals indicates the new ‘red lines’ to the game (just as Hizbullah and Israel set their ‘red lines’ to the conflict between them in the north).  Iran has signaled that it does not contemplate war, yet it will not accept to be squeezed until its pips squeak.

But beyond this, the fistful of messages may be aimed to drive a wedge between Trump and Bolton. It puts the onus on Trump to clarify whether he stands with Bolton (for regime change achieved one way or another), or if his ‘red line’ is indeed ‘no new American war’ in the Middle East: “I don’t think Trump wants war”, said FM Zarif, during his visit to New York last month, as he labelled MbZ, MbS, Bolton and Bibi as the true warmongers.

We’ll see: the US, Saudi, Israel and the UAE now have to consider whether they want to respond to Iran’s response. The risk Iran takes is that Trump may opt for what he might view as a compromise: i.e. to repeat the Tomahawk ‘tweet’ that he delivered to Syria last year – in order to demonstrate resolve – yet to not cause Iran strategic damage.

The U.S. ambassador to Saudi Arabia has said that once the culprit to the tanker attacks was determined, the U.S. should take “reasonable responses short of war.”

One possible reason might be that Trump trusts the Israeli analysis that Iran stands at the brink of imminent collapse, and that one small push would be sufficient to have the Iranian government lose its footing, and to slide over the edge. Netanyahu has been very explicit to Trump on insisting that Iran is on the verge of implosion.  And it is clear that domestic US networks – including Iranian exiles – are making the same pitch too. This view might seem easy to dismiss as unsupported by any evidence, but it is a view that is almost certainly being stovepiped into a (very receptive) White House.

The other reason is that whereas it is true that Trump’s whole policy is essentially domestic (returning manufacturing jobs back to the US), and that his approach is mercantile and transactional, this motivation does not hold for his Evangelical base (i.e. one in every four Americans). The latter, by contrast, does have a strong foreign policy commitment: that of fulfilling the Biblical prophesies concerning Israel, and thus returning the messiah to earth. One leading Christian Zionist predicts:

“It is exactly a year since the U.S. Embassy in Israel was relocated to Jerusalem, and American evangelicals are celebrating the achievement and feeling politically emboldened by it. Robert Stearns, an evangelical pastor and leading voice in the Christian Zionist movement, said that evangelicals “take strength” from the embassy move and are “motivated” to only increase their activism on behalf of the Jewish state … Stearns believes “there is going to be greater activism in support of Israel over the next few years — more than ever before.” To anyone who thinks the embassy move will lead to complacency and a relaxed approach, Stearns says: “You ain’t seen nothing yet. This is only the beginning.”

And Trump’s policy on Iran – including the US withdrawal from the JCPOA – is very much a part of that Evangelical activism, and thus of the electoral pressures on Trump coming from his loyalist camp.

Jewish Zionism – though secular – was, from the beginning, a biblical project – as Laurent Guyénot observes: “That Zionism is biblical doesn’t mean it is religious; to Zionists, the Bible is both a “national narrative” and a geopolitical program rather than a religious book (there is actually no word for “religion” in ancient Hebrew). Ben-Gurion was not religious; he never went to the synagogue and ate pork for breakfast. Yet he was intensely biblical”.

So when Christian Zionists and Israeli leaders both dream of a “Greater Israel” of biblical proportions, they are not somehow romantically committing to a two-thousand-year-old narrative: “Zionism cannot be a nationalist movement like other[s]”, Guyénot writes, “because it resonates with the destiny of Israel as outlined in the Bible”.  It is here – in its nature as a grand ideological project – that the US Christian Zionists become so politically significant. They may indeed – over time – succeed in shaping Trump’s response to Iran’s attempt to force its ‘red lines’ on the US and its regional allies.

‘The project’, as it were, precisely because its implicit ideology, demands no less than a ‘neo Sykes-Picot’ re-drawing of the Middle East – one likely to be just as problematic as the Sykes-Picot original. Israel is to be expanded politically – and not just in terms of borders – to become Greater Israel; its effective borders altered; the Palestinians bought off, dispersed and divided; and other regional ethnic minority populations such as the regions Kurds either elevated into nationhood; or encouraged to become secessionists (The Baluch, Azeris, etc.). And as Israel grows and its reach extends, so the historic great nations – Syria, Mesopotamia and Persia – must be shrunk or weakened, or both, in order to seal the stability of this ‘neo’ Sykes-Picot construct.

Would Trump be bothered by the disruption that a Tomahawk volley might entail? Probably not. The evangelicals will, of course, vote for him in 2020 for the embassy move to Jerusalem alone.  And paradoxically, regional instability might suit him well: Instability in the Middle East would help cement America’s global energy dominance – persuading Europeans to buy American LNG at a premium on the grounds that Middle East supply is ‘uncertain’.

Iran’s calculus implicit in its messaging is that Trump does not want a war, and Iran does not want war either; but to avoid ‘war’, Trump needs to respect Iran’s ‘red lines’. In short, he must react ‘rationally’, and distance himself from Bolton.

We must hope that Iran has got this right.  Might Trump – instead – judge that he cannot delude his core Evangelical base, and send over a few Tomahawks? This is the risk Iran is taking. But the alternative – doing nothing – seems even more likely to pave the way for Bolton’s path of incremental threat escalation, leading towards a Trump cornered into feeling the pressures, and that he has no alternative, but military escalation.

0 thoughts on “Iran Messages to Trump’s Pressures: Pain Can Be Reciprocal”