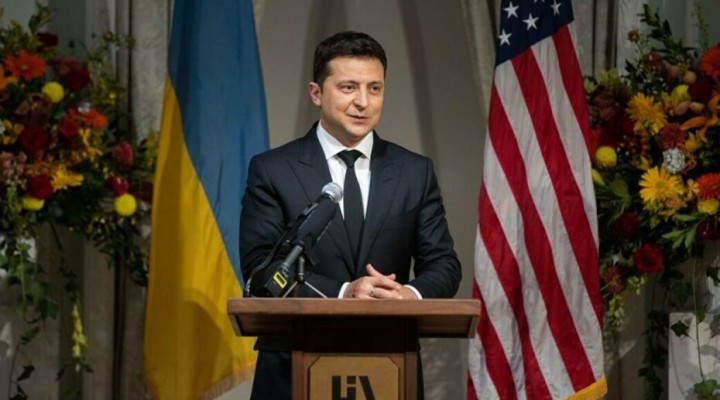 The escalation of violence by the Kiev regime with U.S. and NATO support means that there is a directive from Washington for widening the war.

The United States is planning to redouble its weapons supply to Ukraine. What is shaping up is an intensified proxy war against Russia in which the Russophobic Kiev regime acts as Washington’s catspaw. The objective is to debilitate Russia in the same way the U.S. sapped the Soviet Union with a quagmire war in Afghanistan during the 1980s.

U.S. media reports cite Pentagon and Ukrainian officials saying that the Biden administration is considering a massive increase in armaments to the Kiev regime. This is on top of the $2.5 billion in military support that Washington has already given over the past eight years. The Biden administration has overseen $450 million in weaponry to Ukraine this year alone with a further $300 million budgeted for the coming 12 months. A separate proposal going through the Senate is seeking to boost military support for next year by another $450 million.

What gives added significance to this weapons pipeline is where they are being sourced. U.S. media reports say the arms are from inventories the Pentagon had allocated for the American-backed army in Afghanistan before it collapsed with the sudden Taliban victory in August. The weapons include Black Hawk helicopters and anti-armor munitions.

Other weapons under consideration for supply to Ukraine include more Javelin anti-tank missiles as well as Stinger anti-aircraft munitions.

In addition to the inventories previously allocated for Afghanistan, the U.S. is also planning weapons supplies from covert stockpiles overseen by the CIA in Romania and Bulgaria. This is the dark supply route that the U.S. and NATO allies used for arming terrorist proxies in a failed bid to overthrow the Syrian government. Russia’s military intervention in Syria in late 2015 defeated Washington’s regime-change objective in Damascus.

The year before, in 2014, the U.S. and its allies succeeded in their regime-change operation in Ukraine when an elected government friendly with Moscow was overthrown by a CIA-backed coup d’état. That coup brought to power a Neo-Nazi Russophobic regime that has been waging a civil war against the ethnic Russian population of southeast Ukraine. U.S. and NATO weapons supplies have motivated the Kiev regime to persist in hostilities despite a formal peace agreement known as the Minsk accord signed in 2015. France and Germany, supposed guarantors of the accord along with Russia, have both turned a blind eye to Kiev’s systematic violations.

Since the Biden administration took office 11 months ago, the Kiev regime has stepped up its provocations in southeast Ukraine. These provocations are ultimately aimed at destabilizing Russia. As well as weaponry, American and other NATO special forces are on the ground in Ukraine acting as “military advisors”. The accelerator for aggression has been stepped on in recent weeks.

The Kremlin has warned that the Ukrainian forces are ratcheting up hostilities towards the southeastern region that borders Russia. Russian President Vladimir Putin has recently said that the siege on the region also known as Donbass resembles a genocide.

The stark fact is that there is already a proxy war going on in Ukraine against Russia. Arguably, that has been the U.S. objective since the coup in Kiev in February 2014. The current escalation of violence by the Kiev regime with U.S. and NATO support means that there is a directive from Washington for widening the war.

Paradoxically, or perhaps more accurately, cynically, the U.S. and its NATO allies are boldly inverting reality with a torrent of claims that they are “defending” Ukraine from “Russian aggression”. Recent weeks have seen a full-court media propaganda campaign to shift the blame on an alleged Russian force build-up. Moscow has vehemently denied it has plans to invade Ukraine. It points out that satellite imagery cited by the U.S. and its allies for claiming a Russian build-up actually shows forces in established bases hundreds of kilometers from the border with Ukraine.

Taking stock of the situation: Ukrainian forces are stepping up aggression against the Russian-speaking population under siege for nearly eight years in the Donbass region. The U.S., NATO and European Union are complicit in this criminal aggression by weaponizing, training and apologizing for the Kiev regime with spurious allegations against Russia. Furthermore, there is an unprecedented build-up of U.S. and NATO forces in the Black Sea region conducting unscheduled war drills on Russia’s border. That is inescapably acting to embolden the unhinged Kiev regime, even more, to take the war to Russia.

Moscow is earnestly warning Washington and its NATO partners of red lines. Russia has called for a formal agreement to prohibit NATO expansion for Ukraine’s membership of the military bloc as well as installation of American weapons systems on Ukrainian territory.

Washington and its NATO partners appear complacent to a degree that suggests criminal complicity in fanning the tensions.

The Biden White House has already signaled that it will not reciprocate with Russia’s request for these security guarantees. Even if Washington somehow manages to muster the political will to appear to give Moscow some security reassurances, the fact remains that the U.S. and its NATO allies are already deeply involved in waging a proxy war in Ukraine against Russia.

Plans for redoubling weapons flow to Ukraine from inventories allocated for Afghanistan and from covert CIA-run networks in Eastern Europe indicate the proxy war is set for a deliberate escalation.

Senior U.S. lawmakers have intimated that the preferred scenario for Washington is to create a quagmire for Russia similar to the trap set for the Soviet Union in Afghanistan during the 1980s. That proxy war in which the U.S. armed Mujahideen militants with Stinger missiles greatly sapped the Soviet Union leading to its demise. Those militants later evolved into Al Qaeda networks that were used in the failed U.S.-backed regime-change operation in Syria over the past decade.

The Russophobic Kiev regime is being driven to escalate its terror war against the Russian people in Donbas. The objective is to draw Russia into that war to defend people with whom it is culturally connected. The moral imperative on Moscow to act would be huge. Washington is calculating that the move turns into a quagmire that will debilitate Russia and tarnish its international standing.

But this nefarious plan – an Afghanistan-Syria redux – could so easily slide over the abyss into a full war between the United States and Russia. Moscow seems to be more cognizant of that possible disaster than Washington which is afflicted with the insouciance of arrogance.

0 thoughts on “U.S. Proxy War Against Russia in Ukraine: The Afghanistan-Syria Redux Option”