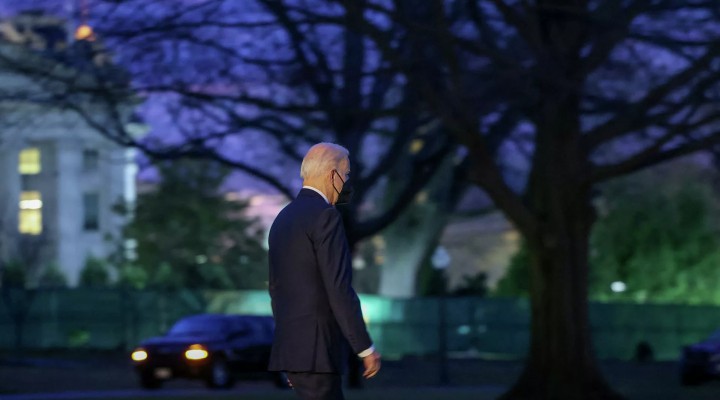 The news that Joe Biden’s big-ticket domestic agenda is cratering only adds to deep concerns that the United States is heading towards more conflict with Russia and China.

The Democrat president was elected on promises to give working Americans “a break” with “big” (actually, modest) spending commitments for improving social services and helping them against decades of neoliberal economic vices that enriched the oligarchy.

Now those promises have turned to dust after a corporate-sponsored senator in Biden’s party joined with Republicans to kill off the president’s $1.75-trillion “Build Back Better” social infrastructure bill. Grotesquely, they say this is to avoid increasing national debt and inflation when the same lawmakers gladly vote for a military budget of nearly $8 trillion over the same 10-year period.

Biden’s poll numbers have already been tanking from the perception that his administration is floundering and ineffectual. It doesn’t help either that his vice president, Kamala Harris, seems to be a walking gaffe machine and a total non-entity without an iota of principle.

In short, Biden is a lame-duck president who is facing a voter backlash in the mid-term congressional elections next year.

The domestic crippling of the Biden administration is bad news for the mounting tensions in Europe towards Russia over Ukraine. It is also bad news for tamping down equally dangerous tensions between the United States and China over Taiwan.

That’s because any move by Biden to engage in diplomacy with Moscow or Beijing will be portrayed by his domestic opponents in the GOP and rightwing media as the president being “weak”. With his social reform programs in tatters, Biden is, therefore, more vulnerable to criticism from hawkish Republicans.

Already we have seen how Biden’s limited outreach with President Vladimir Putin of Russia and President Xi Jinping of China is lambasted by Republicans as a sign of weakness and “appeasement”.

The hot-heads in Washington are demanding the United States “stand up” to alleged “aggression” from Russia and China towards Ukraine and Taiwan, respectively.

Lamentably, just at this crucial juncture when a strong American leader is needed to engage in substantive diplomacy and negotiation with Putin and Xi, we have a shell of a man in the White House who is held hostage by the War Party. The War Party includes Republican and Democrat lawmakers who believe that Russia and China are evil incarnate.

On the explosive tensions over Ukraine, the Biden administration has stoked the problem with lurid media claims of Russia planning an invasion. Moscow has vehemently rejected the claims as “hysterical nonsense”. There is no plan to invade any neighboring country, says Russia, which rightly points out the aggression and military build-up is coming from the NATO-backed Kiev regime, as well as NATO forces mounting unprecedented war maneuvers in the region.

The Kremlin last week offered a security package that could form the basis for negotiations between Biden and Putin to resolve the potential crisis over Ukraine. Moscow wants commitments from the US and its NATO allies to halt an eastward expansion, including membership of the former Soviet republics of Ukraine and Georgia.

Predictably, the Russophobic regime in Kiev is condemning any US negotiations with Russia as a betrayal. This intransigent anti-Russia view is also backed by Poland and the Baltic States. This distorted “appeasement” criticism which absurdly equates Putin and Xi as some kind of Hitler figure is echoed by Washington hawks in the Republican and Democrat parties.

The reasonable proposals put forward by Russia to seek a negotiated, diplomatic way out of the dangerous tensions over Ukraine will, unfortunately, not gain much traction in Washington due to the domestic woes of Biden. The same goes for a possible negotiated way out of conflict between the US and China over Taiwan.

The Biden administration is being pushed to send more military aid in support of the Kiev regime. That will serve to further embolden this Russophobic regime to step up its civil war against the Russian population in Southeast Ukraine. Because of Biden’s abject failure to sort out the deep-seated social and economic problems in the United States, he is more likely to pursue reckless militarism towards Russia and China.

To address US social problem requires bold political solutions to overhaul the bankruptcy of American corporate capitalism, the industrial-military complex and its oligarchy. Biden and the Democrat party have not got the cajones nor political vision to do that. They are doomed to fail which in turn makes US policymaking an even more pliant tool for the War Party.

This bodes ill for a peaceful resolution of international tensions. Washington is on a collision course with Moscow and China and there is no one capable or willing to steer a different course.