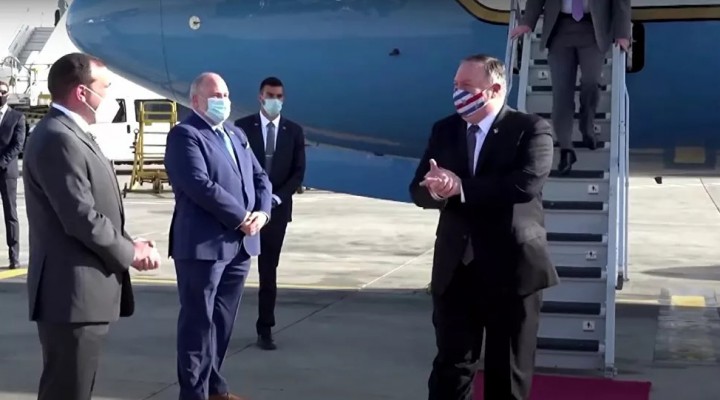 Appropriately attired, US Secretary of State Mike Pompeo arrived in Israel this week wearing a face-mask, along with his usual crumpled suit – which had the unfortunate effect of making him look rather more like a gangster than someone taking precautions to avoid COVID-19.

The star-and-stripes pattern of the mask was simultaneously comical and sinister.

It was, ironically, appropriate attire because Pompeo was in Jerusalem to meet with Israeli premier Benjamin Netanyahu to discuss US-backed plans for formally annexing the occupied Palestinian territories.

Under the Orwellian-named “vision for peace”, the Trump administration is giving the green light to Israel to “legalize” the theft of what remains of Palestinian lands in the West Bank and Jerusalem.

Former UN rapporteur Richard Falk comments that this US-Israeli policy is tantamount to “gangster geopolitics”. It “shows a shocking disregard for international law,” notes Falk. The move “directly challenges the authority of the United Nations, which by an overwhelming continuous consensus regards Israel’s presence in the West Bank, East Jerusalem, and Gaza as solely based on force and occupation.”

So there you have it. The US and its Israeli ally have officially gone rogue in terms of not abiding by international law. Not that that should be any surprise, given the decades of US-backed illegal occupation by Israel of Palestinian territory and its systematic violation of human rights.

What seems to be new, however, is the brazenness of the gangsterism – conveniently imaged, albeit inadvertently, by Don Pompeo wearing a mask as he touched down in Israel to conduct his unseemly business on behalf of his capo back in the White House.

The Trump administration has dispensed with any pretence of the US adhering to international law when it comes to the Middle East unlike past presidents who paid hypocritical lip-service to legalities and supposedly acting as “an honest broker”.

For that dubious clarity under Trump, we might be somewhat appreciative as it removes cosmetic deceptions and exposes the real and brutish nature of US foreign policy.

What’s also new is the flurry of gangsterism-cum-foreign policy out of Washington. There seems now to be no let-up in the rogue conduct by the US. This goes beyond the Israeli-Palestinian conflict to encompass a gamut of other international affairs.

The Trump “regime” (a more accurate term than “administration”) has bluntly ignored international appeals for it to end unilateral sanctions imposed on countries in the midst of the global COVID-19 pandemic.

As nations struggle to cope with the deadly disease, Washington doubles down on its economic aggression against Iran, Venezuela, Russia and many others.

Now US senators are pushing to add China to its sanctions aggression for what Trump and other politicians in Washington claim is Beijing’s fault for starting the pandemic. That recklessly incendiary claim has been condemned by China and others.

Russian Foreign Minister Sergei Lavrov this week deplored baseless allegations made by the US against Russia, China and the World Health Organisation. Lavrov insightfully remarks that Washington is using slanderous accusations over the pandemic in order to incite confrontation, and in that twisted, calculated way, to impose its vision for sought-after US geopolitical control. In short, it is an insane gambit by a waning empire trying to stave off loss of power.

The priorities of Washington are indeed sick. That’s because it is a sick regime. Instead of adequately and humanely dealing with an American death toll from Covid-19 – a toll far exceeding the rest of the world’s – here we have Mike Pompeo snubbing the UN charter while in Jerusalem; a charter established to prevent the repeat of fascist crimes of aggression in the aftermath of World War Two.

Appalling too is that Pompeo is the chief cheerleader in the Trump administration spouting allegations for smearing China. Pompeo claims, with no evidence, that the coronavirus was released from a Chinese laboratory in Wuhan. The CIA, which Pompeo formerly directed before becoming the US’s so-called top diplomat, is now reportedly claiming that Beijing covered up the outbreak when it occurred at the end of December 2019. This is nothing but a fabrication-in-process which could lead to all-out war.

Washington has become unhinged in its lawlessness. Its irrational conduct and mendacity is manifestly in total repudiation of diplomatic norms and respect for civilized international relations. Unhinged, unapologetic and unmasked.

0 thoughts on “US Lawlessness Unmasked”