HOME / WORLD / Netanyahu Is Back Yet Again 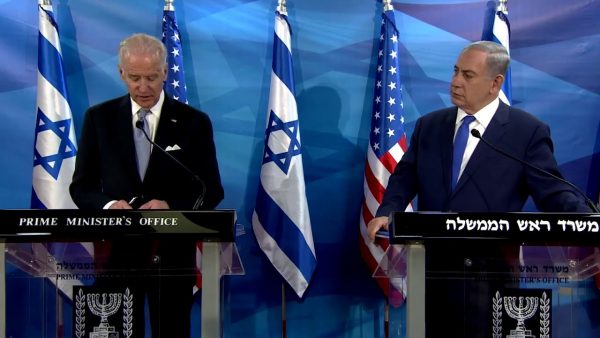 Israel will become much bigger

Rahm Emanuel, up until recently the mayor of Chicago and before that a top advisor to the president in the Bill Clinton and Barack Obama White Houses and still earlier a volunteer in the Israeli Army, famously once commented that a good crisis should never be allowed to go to waste. He meant, of course, that a crisis can be exploited to provide cover for other shenanigans involving politicians. It was an observation that was particularly true when one was working for a sexual predator like Bill, who once attacked a “terrorist” pharmaceutical factory in Sudan to divert attention away from the breaking Monica Lewinski scandal.

To be sure, the United States government is focusing its attention on the coronavirus while also using the cover afforded to heighten the pressure on “enemies” near and far. As the coronavirus continues to spread, the Trump White House and Secretary of State Mike Pompeo have increased the ferocity of their sabre rattling, apparently in part to deter Russia, China, Iran and Venezuela. Ironically, of course, none of the countries being intimidated are actually threatening the United States, but we Americans have long since learned that perceptions are more important than facts when it comes to the current occupant of the oval office and his two predecessors.

The latest bit of mendacity coming out of the White House was a presidential tweettargeting the usual punching bag, Iran. Based on an incident that occurred two weeks ago, Trump threatened “I have instructed the United States Navy to shoot down and destroy any and all Iranian gunboats if they harass our ships at sea.” Iran’s flying gunboats are clearly a formidable force but it is certainly reassuring to note that naval anti-aircraft fire has been directed to deal with them. The U.S. Navy ships in question are, one might also observe, in a body of water generally referred to as the Persian Gulf, where they are carrying out maneuvers right off of the Iranian coast. Meanwhile, Iranian flying gunboats have not yet been observed off of New Jersey, but they are probably waiting to be transported to the Eastern Seaboard by those huge trans-oceanic gliders that once upon a time were allegedly being constructed by Saddam Hussein.

Given the cover provided by the virus, it should surprise no one that Israel is also playing the same game. The Jewish state has been continuing its lethal bombings of Syria, with hardly any notice in the international media. In a recent missile attack, nine people were killed near the historic city of Palmyra. Three of the dead were Syrians while six others were presumed to be Lebanese Shi’ites supporting the Damascus government. Israel de facto regards any Shi’ite as an “Iranian” or an “Iranian proxy” and therefore a “terrorist” eligible to be killed on sight.

But the bigger coronavirus story has to do with Israel’s domestic politics. Benjamin Netanyahu and his principle opponent Benny Gantz have come to an agreement to form a national government, ostensibly to deal with the health crisis. The wily Netanyahu, who will continue to be prime minister in the deal, has thereby retained his power over the government while also putting a halt to bids from the judiciary to try and sentence him on corruption charges. As part of the deal with Gantz, Netanyahu will have veto power over the naming of the new government’s attorney general and state prosecutor, guaranteeing the appointment of individuals who will dismiss the charges.

And more will be coming, with the acquiescence of Washington. U.S. elections are little more than six months away and Donald Trump clearly believes that he needs the political support of Netanyahu to energize his rabid Christian Zionist supporters, as well as the cash coming from Jewish oligarchs Sheldon Adelson, Bernard Marcus and Paul Singer. So, it is time to establish a quid pro quo, which will be Israeli government behind the scenes approaches to powerful and wealthy American Jews on behalf of Trump while the White House will look the other way while Israel annexes most of the remaining Palestinian West Bank. Pompeo has welcomed the new Israeli government and has confirmed that the annexation of the Palestinian land will be “ultimately Israel’s decision to make,” which amounts to a green light for Netanyahu to go ahead.

A vote on West Bank annexation will reportedly be taken by the Knesset at the beginning of July followed immediately by steps to incorporate Jewish settlements into Israel proper. According to the Israeli liberal newspaper Haaretz, the planned annexation has raised some concerns among a few liberal American Jewish organizations because it will convince many progressives in the U.S. that Israel has truly become an apartheid state. J Street warned that annexation “would severely imperil Israel’s future as a democratic homeland for the Jewish people, along with the future of the U.S.-Israel relationship” and has even suggested cutting U.S. aid if that step is actually taken. Most other ostensibly liberal groups have adopted the usual Zionist two-step, i.e. condemning the move but not advocating any effective steps to prevent it. And it should also be noted that the largest and most powerful Jewish organizations like the American Israel Public Affairs Committee (AIPAC) and the Zionist Organization of America (ZOA) have not raised any objections at all.

Unaffiliated individual liberal Jews, to include those who consider themselves Zionists, have generally been concerned about the move, though their argument is quite hypocritical, based on their belief that annexation would pari passu destroy any possible two-state solution, damaging both Palestinian rights and “Jewish democracy.” Some have even welcomed the change, noting that it would create a single state de facto which eventually would have to evolve into a modern democracy with equal rights for all. Such thinking is, however, nonsense. Israel under Netanyahu and whichever fascist retread that eventually succeeds him regards itself as a Jewish state and will do whatever it takes to maintain that, even including dispossessing remaining Arabs of their land and possessions, stripping them of their legal status, and forcing them to leave as refugees. That is something that might be referred to as ethnic cleansing, or even genocide.

And those Americans of conscience who are hoping for some change if someone named Joe Biden defeats Trump can also forget about that option. Biden has told the New York Times that “I believe a two-state solution remains the only way to ensure Israel’s long-term security while sustaining its Jewish and democratic identity. It is also the only way to ensure Palestinian dignity and their legitimate interest in national self-determination. And it is a necessary condition to take full advantage of the opening that exists for greater cooperation between Israel and its Arab neighbors. For all these reasons, encouraging a two-state solution remains in the critical interest of the United States.”

Unfortunately, someone should tell Joe that that particular train has already left the station due to the expansion of the Jewish state’s settlements. Nice words from the man who would be president aside, Biden is bound to the Israel Lobby for its political support and the money it provides as tightly as can be and he will fold before AIPAC and company like a cheap suit. He has famously declared that “You don’t have to be a Jew to be a Zionist – I am a Zionist” and “My Name is Joe Biden, and Everybody Knows I Love Israel.” His vice-presidential candidates’ debate with Sarah Palin in 2008 turned embarrassing when he and Palin both engaged in long soliloquys about how much they cherish Israel. Indeed they do. Every politician on the make loves Israel.

0 thoughts on “Netanyahu Is Back Yet Again”