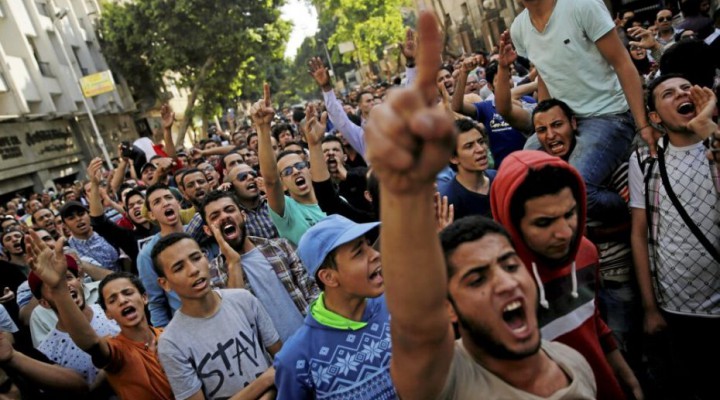 The Middle East has little choice: It will be pushed to view the U.S. as its past, and to ‘Look East’ for its future, Alastair Crooke writes.

Some eight years ago, I wrote about the outbreak of popular stirring in the Middle East, then labelled the ‘Arab Awakening’. Multiple popular discontents were welling: demands for radical change proliferated, but above all, there was anger – anger at mountainous inequalities in wealth; blatant injustices and political marginalisation; and at a corrupt and rapacious élite. The moment had seemed potent, but no change resulted. Why? And what are the portents, as the Corona era covers the region once again with dark clouds of economic gloom and renewed discontent?

The U.S. was conflicted, as these earlier rumblings of thunder spread from hilltop to hilltop. Some in the CIA, had perceived popular movements – such as the Muslim Brotherhood (MB) (although Islamist) as the useful solvent that could wash away lingering stale Ottoman residues, to usher in a shiny westernised modernity. Many over excited Europeans imagined (wrongly), that the popular Awakenings were made in their own image. They weren’t.

The facile interpretation of the Awakening as a liberal democratic ‘impulse’ was at best, an exaggeration, if not a pure fantasy. I wrote then (in 2012): “What genuine popular impulse there was at the outset … has now been subsumed, and absorbed into three major political projects associated, rather with a push to reassert [Sunni] primacy across the region: a Muslim Brotherhood project, a Saudi-Salafist project, and a militant Salafist project [which subsequently was to evolve into ISIS]”.

The key early player was the Muslim Brotherhood. I wrote:

“No one really knows the nature of the Brotherhood project: whether it is that of a sect, or if it is truly mainstream; and this opacity is giving rise to real fears. At times, the Brotherhood presents a pragmatic, even an uncomfortably accommodationist, face to the world, but other voices from the movement, more discretely evoke the air of something akin to the rhetoric of literal, intolerant and hegemonic Salafism. What is clear, however, is that the Brotherhood tone everywhere, is increasingly one of militant sectarian [i.e. Sunni] grievance.”

This was the common thread: All these supposedly popular dynamics had become tools in the “fervour for the restitution of a Sunni regional primacy – even, perhaps, of hegemony – to be attained through fanning rising Sunni militancy and Salafist acculturation”. Containing Iran, of course was a primary aim (encouraged, of course, by Washington). But these forces collectively comprised a project in which Gulf leaders managed and pulled the levers – and paid the bills too.

And for an early instant, those in the U.S. who had bet on the Muslim Brotherhood, glimpsed victory. Egypt fell to the MB; Syria was subject to a full-spectrum ‘war’, and the Muslim Brotherhood openly expressed its objective to ‘take’ the Gulf, where it had long established covert cells and networks.

But it was overreach. The Muslim Brotherhood was, it seemed to interested parties, about to steal (like Prometheus), the fire which belonged exclusively to ‘the gods’. Plus, the MB were revealing obvious flaws: Its leadership in Cairo was deeply unconvincing. In Syria, where the movement never had significant penetration (single digit percent support), it was being quickly displaced by war-experienced Salafists coming in from the war in Iraq.

The American, European and Gulf leaders (i.e. the gods) turned sharply away from the Muslim Brotherhood (Qatar was the exception) – and turned instead to ISIS and Al-Qaida. The ‘gods’ were set on making an example of a non-compliant Assad and increasingly, they looked to the latter – ISIS – to inject the required savagery to claw down Assad – in the face of the latter’s tenacious fight-back.

In any event, sentiment turned violently against the MB from many quarters. Secular Arab nationalists had always heartily detested the MB, and the al-Saud and Emirate leaderships similarly detested the Muslim Brotherhood (albeit for different reasons).

But there was always a fundamental contradiction in the American flirtation with the Muslim Brotherhood: it was that Washington’s objective was never regional reform – whether secular or Islamist; the aim always was to preserve a malleable status quo in the Middle East.

U.S. neo-cons were then at the peak of their influence. Since 1996, they had insisted on unqualified U.S. support for the region’s Kings and Emirs versus the Ba’athists and Islamists. It was they who won out easily – against CIA officers such as Graham Fuller – in the debate on whether or not to support any sort of ‘Arab Awakening’.

The U.S. sided with Saudi Arabia and UAE in mounting the coup against the Muslim Brotherhood President in Cairo. And still today, the U.S. and its European protégés support the UAE’s Crown Prince in his vendetta war against Islamists everywhere, from the Horn of Africa to the Magreb – and against Turkey too, as the Muslim Brotherhood’s ‘mother-ship’.

This ‘war on Islamists’ has provided cover for the counter-revolutionary repression of any reform of the ‘Arab System’ – a rearguard Gulf action initially triggered by fears that any ‘Awakening’ might sweep away Gulf ruling families. Today, the UAE continues to try to seed compliant strongmen, General Sisi lookalikes, in states such as Libya and now Tunisia.

So, here we are. But, where are we going? And, above all, why no reform? Can this continue, or will the region explode under the effects of the Covid-triggered, recession?

No reform at all, for a full decade? What’s the block? Well, in the first place, the background lies with those two key neo-con policy papers: the 1996 Clean Break, and David Wurmser’s follow-on, Coping with Crumbling States. These two documents laid the basis for the U.S. (and Israeli) endorsement of Gulf States acting as ‘policeman’ and regional strongmen (a role that the UAE has taken to a new peak), managing any rumblings of dissent (such as in Libya).

These ‘policy papers’ may have been the precursors, but in the final analysis, the ‘block’ simply is, and has been, Israel – both indirectly and directly. The Clean Break’s full title was a New Strategy for Securing the Realm (i.e. Israel). It was a blueprint for underpinning Israel’s security. Ditto for Wurmser’s paper.

In sum, either U.S. or Israeli fears, or U.S. concerns to appease domestic U.S. constituencies, lie at the bottom of this stasis: Israeli and the U.S. élites are wholly comfortable with this malleable status quo – and fear it changing in any way that they cannot control. No reform for the Middle East – only disruption.

The western response to the Coronavirus spoke loudly: The U.S. and Europe have appeared powerful because they projected the illusion of competence; of being able to act effectively; of being strategic in their actions. On Coronavirus, the U.S. has shown itself incompetent, dysfunctional, and indifferent to human affliction.

Trump is fighting an existential war: on the one hand, the coming Election is not merely the most important in the U.S.’ history. It will be existential. No more is Blue/Red a contrived theatre for the electorate – this is deadly serious.

For an important segment of the population (no longer the majority), to lose in this coming election would signify their ejection from power and politics, and their substitution by a culturally different class of Americans, with different cosmopolitan and diversity values. It is the tipping point – two irreconcilable visions of American life believe that they can continue only if they own the whole order, and the other side be utterly crushed.

And on the other hand, Trump sees the U.S. fighting a similarly existential war, albeit at a global plane. He is fighting a hidden ‘war’ to retain America’s present dominance over global money (the dollar) – the source of its true power. For Americans to lose this parallel competition to the EU’s and China’s multilateral values of global co-operation and financial governance, would imply Americans’ (i.e. white Anglo Saxon’s) ejection from control over the global financial system, and (again) their substitution by a quite different vision (i.e. a Soros-Gates-Pelosi vision), advocating the ‘progressive’ values of ecological and financial, global governance.

Again – two irreconcilable visions of the global order, with each party believing that it must own the whole order to survive.

Hence Trump’s full-spectrum disruption of China (and the whole multilateral ideology) to maintain dollar hegemony. Europe, on one side, exemplifies the shift towards a transnational regulatory and monetary super-state. And China, on the other, is not only Europe’s willing partner, but the only power capable of sitting atop this globalist ambition, giving it the (required) financial weight and substance. This constitutes the existential threat to the U.S.’ exceptional control of the global financial system – and therefore over global political power.

A sovereignty-ist Russia may not be as drawn to this cosmopolitan vision as China, but really it has little choice. Because, as President Putin repeatedly points out, the dollar constitutes the toxic problem plaguing the world trading system. And in this, Russia cannot stand aloof. The dollar is the problem for the Middle East too, with its noxious corollaries of oil, currency, trade and sanctions wars. The region will not long be able to sit on the fence, keeping distant from this struggle for the global financial order.

The Middle East, as deference to the U.S. illusion of power wanes, has as little choice as has Russia: It will be pushed to view the U.S. as its past, and to ‘Look East’ for its future.

And Israel will cease to be the pivot around which the Middle East revolves.