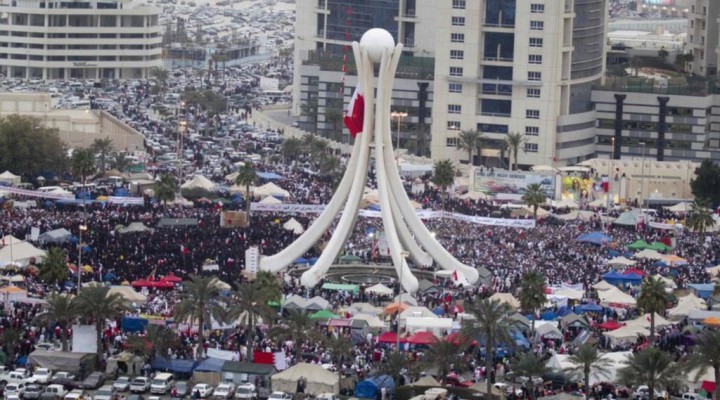 Exclusive- Inspired by the widespread popular movements across the Middle East, Bahrain’s opposition groups rose up in a series of pro-democracy demonstration in almost all towns and villages demanding political reforms after enduring decades of structural inequalities, corruption, and repression. However, those peaceful demonstrations were violently broken up by government backed by Saudi forces; dozens of protesters were murdered and hundreds were detained.

In the nine years since, movement, and due to the government’s repressive measures, has grown quieter but never ended. Those peaceful demonstrations continue sporadically, from time to time devolving into violent clashes between the armless protestors and the riot police, which fires rubber or shotgun pellets. Opposition leaders are held behind bars merely for demanding political reforms. A large number of jailed critics as well as human rights advocates who exercise their internationally protected freedom of expression is alluring. Besides, arbitrary and sham prosecution and conviction continue and laws authorising these practices remain in force.

On the eve of February 14 revolution, Bahrain’s senior religious scholars or the Ulama applauded the Bahrainis’ persistence to support their righteous cause against the arrogant tyrants’ injustice and corruption. Bahrain’s majority Shiite population looks to the Ulama as their principal guides in religious and political affairs, as well as in many social ones. In a statement, the scholars said that for prolonged years, the people have been confronting the oppressive regime, adding that Bahrain’s status quo has relatively been constant, in light of the government’s bogus reforms and its denunciation of many covenants.

The Bahrainis profoundly reject despotism and experience has shown that they are hard to succumb to injustice neither do the country settles in its shadow; hence, comprehending this dogma is the only gateway to resolve the crisis and attain Bahrain’s stability, development and prosperity, the scholars averred. They, then, renewed commitment, loyalty and devotion to His Eminence Ayatollah Isa Qassim; to the righteous martyrs and their families and to Bahrain’s wounded, patient and detained people. The scholars pledged to carry on the uprising against injustice and dictatorship, and that they do not condone the oppression of the people.

The statement reaffirmed the scholars’ assertion that the Bahrainis” victory is imperative because of their righteousness and God’s law, which states that the oppressed are ultimately the victorious. They added that they are fully confident in the wisdom of their leadership; the sincerity of their national symbols; the unflinching patience, solidity and willingness of their people. The scholars also reiterated the Bahrainis’ adherence to their legitimate demand of establishing a constitution, through which they can freely determine their destiny, and their demand of forming a just government, through which their inalienable political right to freedom and dignity are shielded, especially those related to religious rituals, sanctities and statutes, which have not been spared from the government’s aggression.

The scholars also affirmed that in light of their leadership’s shrewdness, popular figure’s resilience and people’s awareness; all attempts by the regime to circumvent over these demands have been and would ultimately fail. The Bahrainis’ exceptional allegiance to Ayatollah Isa Qassim, from diversified popular affiliations and orientations, especially at this stage, the statement noted, would strengthen their unity in face of the unprecedented arrogance practised by the government, the scholars emphasised.

Bahrain’s scholars added that the people’s trust in this leadership would undoubtedly pave the path, in the better means, to a bona fide cooperation, stemming from the commonalities and the legitimate responsibilities they all share. They further asserted the people’s conviction to the nonviolent revolution approach as a strategic option, which has demonstrated its reasonability and inevitability, as a prerequisite to the permanence and survival of the movement; this approach is today confirmed more than ever. Then they called upon Bahrain’s promising young generation; chiefly those with leadership qualifications, to peacefully revive the revolution, adding the Bahrainis’ hope reckon on their vitality and vigour and are looking for their revolutionary fingerprints not only on the eve of the ninth anniversary of the revolution but also in the upcoming years.

Moreover, the scholars expressed extreme indebtedness to Bahrain’s helpless youths, who are unfairly chased by the authority; the wounded; the detainees; the martyred, saying all Bahrainis are charged with the duty to stand by them, to check their conditions and to strive to fulfil their needs. On the glorious 14th anniversary of February revolution, the day of standing with just and truth, the scholars, at last, urged all loyal people to take actions by their words, positions, pens, footages and all available and peaceful means; to partake in the held events, peaceful marches and field tours and on social media platforms. Your movement is an ethical and religious obligation, based on the Islamic principle that the best jihad is to tell a word of truth before a tyrannical ruler, the scholars concluded.