HOME / WORLD / Is There Much Point in Putin or Xi Talking With Biden? 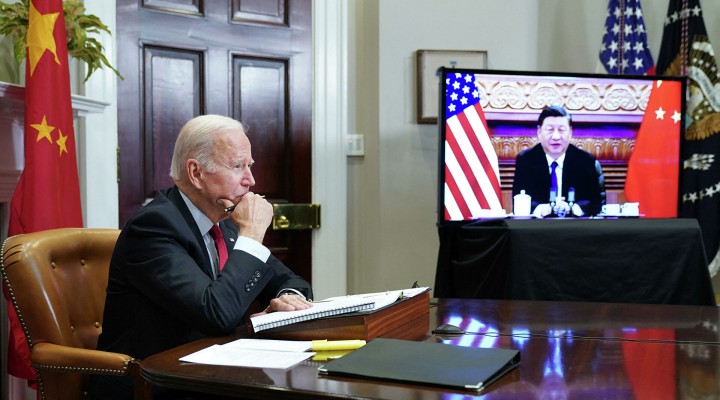 If a dialogue produces positive results then of course such dialogue should be pursued earnestly. That’s a general rule.

But what about in the case of dialogue between the US president Joe Biden and his Russian or Chinese counterparts?

Vladimir Putin, the Russian president, is due to hold a virtual face-to-face meeting with Biden in the coming weeks. No date has been set yet. The format will be similar to the one held last week between the American leader and Xi Jinping, the Chinese president.

Of course, at a time of mounting tensions between the United States and both Russia and China, one would think that any outreach between the leaderships is unquestionably a good thing which should be enthusiastically welcomed.

Nevertheless, the question needs to be asked: what are the fruits of dialogue so far? Frankly, there’s not much to show.

Following Biden’s meeting with Xi last week, the United States has not shown any substantive moves to reduce tensions. On a personal level, the US president said he did not want to see relations “veering towards” confrontation with China. Right, well if that is to be believed, then why is Biden talking now about boycotting the Winter Olympic Games in Beijing in what is evidently a continuation of the US provocative policy to designate China a pariah? Why is Washington continuing to militarize the seas around China with warships and submarines and fomenting incendiary tensions over the breakaway Chinese island-territory of Taiwan?

Given the unyielding hostile US attitude following the summit with Xi you do wonder what is the point of talking with Biden?

As regards US-Russia relations, President Putin met Biden in person for lengthy discussions in a one-on-one conference in Geneva earlier this summer. One of the topics was the conflict in Ukraine. Biden reportedly agreed with Putin that the only viable way towards finding a peaceful settlement was through upholding the 2015 Minsk Accords.

So where’s Biden’s practical commitment to the espoused principle on that topic?

Since the June summit in Geneva, the security situation in Ukraine has gravely deteriorated. The US-backed Kiev regime has received more lethal weaponry from the United States and its NATO partners, including anti-tank Javelin missiles and attack drones. Now the US is mulling sending military advisers to the region.

Washington and its European allies, principally Germany and France, have allowed the Kiev regime to systematically undermine the Minsk Accords in flagrant violation of its international obligations. It is steadily militarizing the conflict rather than seeking a political solution with the restive Donbass region. And remember this eight-year war has been running since the West backed a coup d’état in Kiev in 2014 against an elected government, which then brought to power a rabidly anti-Russian regime that glories in past Nazi collusion and crimes against humanity.

The United States is fueling the present war and inciting the Kiev regime to escalate the violence.

Furthermore, Washington has embarked on a full-on propaganda campaign claiming that Russia is planning to invade Ukraine. Moscow has rejected these claims as “absurd” and indeed has expressed concern that the disinformation is actually serving as a cover for the Kiev regime’s own plans to launch an assault on the ethnic Russian population in the Donbass region.

In other words, since Putin met Biden in Geneva the tensions between the US and Russia have significantly increased, not decreased. There has been no discernible effort by the Biden administration to establish a productive dialogue that underpins peace and security, not in Ukraine nor more generally with Russia. Ukraine is the proof of US duplicity or at least ineffectuality in delivering on a dialogue that is presumed to be premised on seeking mutual peace.

Unfortunately, the same critical assessment can be made of Biden’s outreach to China’s Xi. Talk is cheap, if not meaningless when practical policies fly in the face of rhetorical commitments.

We have to realize that Joe Biden – and any other would-be president – is but a figurehead on a ship of state that is charted for collision with Russia and China. The US system is geared for confrontation because it cannot abide anything less than hegemonic domination.

Thus, there is little point talking with Biden and pretending that a friendly relationship can be produced from individual dialogue. Russia, like China, has repeatedly told the United States of its red lines. Washington must therefore desist from fomenting tensions over Ukraine and Taiwan. The proof of proper respect is for those red lines to be avoided. Clearly the United States, as currently ruled, is incapable of reciprocating with Russia or China.

It’s not going to get any better by having a chummy meeting with Biden for the media circus. Indeed, that could only make things worse because it indulges the pretense that the United States is seeking a reasonable peaceful coexistence, when in fact its governing system does not know the meaning of peaceful coexistence, nor want it.

Xi Aims for ‘Common Prosperity;’ Why Can’t the U.S. Have That?!

0 thoughts on “Is There Much Point in Putin or Xi Talking With Biden?”