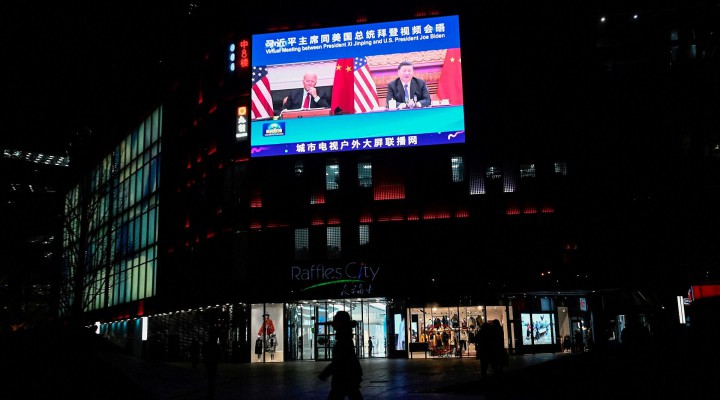 US President Joe Biden this week called on Chinese counterpart Xi Jinping to “ensure competition between our two countries does not veer into conflict”.

Well, that’s super charitable of Joe to not want to plunge the world into a war that would inevitably lead to a nuclear conflagration. Shouldn’t we be grateful for such reasonableness from Washington?

Those seemingly soft words were spoken Tuesday at the first virtual meeting between the two leaders since Biden was inaugurated as president back in January. Contrary to Western media headlines about tamping down tensions, that’s hardly reassuring.

So, after nearly a year of being in the White House, Biden holds his first virtual face-to-face summit with Xi. What’s taken so long for a meeting?

The two men have reportedly had two previous telephone conversations in February and September.

Given the heightened tensions between the two nuclear powers, one would think that high-level US-China communications should be a lot more frequent if there was a serious effort to “ensure competition does not veer into conflict”. Maybe it would help if the US political establishment and media weren’t so obsessed with badmouthing China all the time over alleged transgressions.

In their more than three-hour discussions this week, Chinese President Xi said: “China and the US should respect each other, coexist in peace, and pursue win-win cooperation.”

For his part, Biden said the US adhered to the One China policy of recognising Beijing’s sovereignty over Taiwan and all its territories. He said the US did not support independence for the breakaway island nor was taking unilateral action to undermine security in the region.

The trouble is this American president has a credibility problem when it comes to evaluating even his own words. During the election campaign in 2020, Biden referred to the Chinese leader as a “thug”. Yet here he was this week waving on screen as if they were best buddies.

Biden’s duplicity is similar to how he labelled Russian President Vladimir Putin a “killer”. Then a couple of months later greeted him with smiles and bonhomie at a summit in Geneva.

It’s hard to take anyone’s words seriously when they are capable of such hypocrisy and two-faced deception.

But the credibility problem of Biden and his administration with regard to expressing peaceful relations with China is the complete lack of evidence.

Biden is continuing the wanton aggressive policy of the Trump administration towards China as seen from the maintenance of tough trade tariffs on Chinese exports, selling billions of dollars of weapons to Taiwan and conducting provocative military manoeuvres through the Taiwan Strait and the South China Sea.

China’s President Xi has repeatedly called for preventing the return of a Cold War. However, his appeals for “respect and equality” are continually ignored by the Biden administration and the US establishment.

If Biden believed in respect and equality, then why did he feel entitled to raise issues of alleged human rights abuses in China’s Xinjiang, Tibet and Hong Kong during his summit with Xi, according to the White House? This is blatant interference in China’s internal affairs and sovereignty and posturing of presumed superiority. One can imagine how Biden and the US media would react if Xi had said he wanted to raise issues about police racial killings in the US or why the Pentagon has nearly 800 military bases around the world.

Biden says that he supports the One China policy which designates Taiwan as being under Beijing’s sovereignty. But he and his top aides have done everything to undermine this policy. The Biden administration is provocatively stoking separatist factions in Taiwan to declare independence from Beijing. The increased supply of American weapons to the island and recent public disclosure of US special forces training Taiwanese troops, as well as Biden’s talk about “defending” Taiwan, are fomenting dangerous tensions with Beijing.

President Xi has warned that if Taiwan declares independence that is a red line that will result in military action to exert Beijing’s control over the island. Biden may say he does not support Taiwan’s independence but numerous actions and statements by his administration point to inciting such a move.

The fundamental problem is that the United States does not know the meaning of treating any other nation with respect or equality. It believes it is the world’s exceptional hegemon, entitled to pontificate and dictate to others about “democracy, rule of law and human rights”. The so-called “rules-based global order” is Washington-speak for laws and rules dictated to others by the United States, which views itself to be supremely entitled to ignore these same laws and rules.

The arrogance of US power is endemic. Even when a president holds a summit with a “friend” (or is that a “thug”?), and espouses peace, there are still the indelible hallmarks of arrogant double standards. Biden’s soft talk about the need to avoid “conflict” does not sound reassuring. Rather, it sounds more like a menacing latent threat of conflict being an option on the table if needs be.

American presidents should spare us the rhetoric, and just get on with actions that actually convey peace. Unfortunately, that’s not going to happen under this administration or any other one serving US imperialist power.

0 thoughts on “Not Buying Biden’s Soft Talk With Xi”