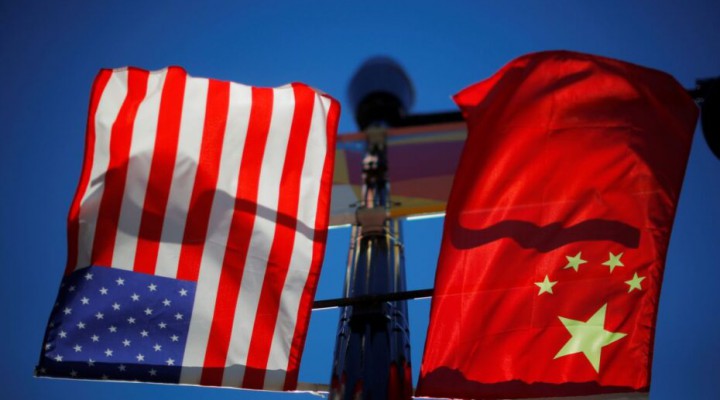 In the wake of the Kabul withdrawal débacle, the U.S. administration is in a tearing hurry to give Biden the semblance of foreign policy success.

The contradictions multiply: On the one hand, U.S. Administration ‘China hawks’ accelerate the eating away, piece by piece, of the ‘One China’ commitment and egg-on Taipei to think that the U.S. ‘has its back’, were China to attempt any reunification of the Island using military force. Yet Taiwan will eventually be integrated into China, as the latter would be bound to prevail militarily, should ‘push come to shove’. Perhaps though, Washington sees this tactical harassment of Beijing as a political ‘capillary action’ success – even if Taiwan’s end-destiny is ‘writ’ in stone.

Then there are reports that Israel is engaged in what are described as ‘intense’ drills to simulate an attack on Iranian nuclear facilities. Blinken has made clear that the U.S. Administration knows what Israel is planning, and approves. He met with Israeli Foreign Minister Lapid on 13 October, and said that should diplomacy with Iran fail, the U.S. will turn to “other options.” Lapid later confirmed that one U.S. option precisely is military action.

Yet, even Israeli military experts admit that there is no realistic Plan ‘B’ to halt Iran’s enrichment programme. One leading Israeli Military Commentator recently noted that: ‘Israel cannot destroy Iran’s nuclear know-how. In a ‘best-case scenario’ military Israeli action would delay the program by “two years maximum”’. Should the Vienna talks fail, either Israel will come to live with a ‘threshold power’ Iran. Or, it must prepare itself for a multi-front regional war – which it is doing.

Thirdly, we observe the most blatant (apparent) contradiction: The West contrives to use Ukraine as the peg to threaten Russia with NATO action, even to the extent of NATO recently lowering the threshold for using its nuclear weapons – and yet … there is no way that Donbass can be seized back by Kiev. Moscow will never allow it, and NATO knows it cannot prevail over Russia in Ukraine, short of an unthinkable nuclear exchange.

Either way, the U.S. – apparently – courts failure: Either Ukraine remains territorially status quo, and disintegrates from the weight its own dysfunctionality, economic collapse and endemic corruption. Or, in a futile gesture, it goes for broke versus the Donbass forces and ends dismembered, as Russia – very reluctantly – is forced to intervene.

What then is the logic to this? For Ukraine, it is either the Scylla or Charybdis. Nonetheless, signs point to the U.S. and its allies providing Kiev with new weapons. Macron is due shortly in Kiev to sell it the weapons with which to threaten Donbass. The re-arming process seems already to be underway. But even with new weapons, Kiev cannot prevail.

Perhaps the Ukrainian public will believe it might – but not the Kiev authorities: Their hope is that any resulting Russian military intervention would force full-blooded European support for Kiev. The EU would, of course, back Kiev – if only to stem a potential millions of refugees heading to the European Union. Yes, the country would have been Balkanised, but the corrupt Russophobic oligarchs would still be intact, and politically ‘on top’.

Thus, it would seem that the American ‘end-game’ is to give a reluctant Russia no choice but to have to intervene. The goal here clearly is not to defeat Russia militarily, but politically (as the Russia commentator, the Saker, has noted). He also rightly points out that Moscow well understands that America and EU leaders are setting it a trap. Nonetheless, Russia would have little option to stand aloof, were their kith and kin in Donbass being slaughtered. (It is possible that the Donbass forces could manage alone, though the domestic pressures on President Putin to intervene would be huge.)

Why should the U.S. in its present politically debilitated state want to risk igniting three unpredictable firestorms? Professor Mearsheimer tells us that China is compelled to build itself as “the ‘Godzilla of Asia’, since that’s the way for it to survive!” It cannot trust the U.S., since it can never be certain about U.S. intentions. Fear becomes dominant in this anarchic jungle of a world. “This is the tragic essence of international politics: the unpredictability of intentions”, Mearsheimer concludes.

There is much in this point: The American Establishment plainly fears, and is angered by, any prospect of losing supremacy. The Democrats, in particular, historically fear to be perceived as weak in preserving hegemony. But one old hand perhaps offers a different insight: Jonathan Clarke, writing in 1996 for the Cato Institute, calls it the flaw of America’s Instinct for the Capillary. That was 1996. This is the proliferate flaw that contains the potential to upend America’s hegemony.

He was referring to the Clinton Administration’s desire to rack up a string of miscellaneous, shallow achievements that would be boasted as successes to the electorate, so that the latter would conclude that foreign policy was in reasonably good shape. Yet they would be in error: The quest for racking-up these hollow achievements “ignored the alarming void, in precisely the area of greatest importance: the question of whether policy was making it more or less likely that America would have to fight a major war in the near future”. The U.S. is addicted to ephemeral success, whilst ignoring its strategic erosion, he wrote.

It was ‘Instinct for the Capillary’, in the sense that water (i.e. these minor successes) can progress along a tube – but only if the tube is sufficiently constrained and narrow:

“The unnuanced support for Taiwanese independence, irrespective of Chinese reactions and the public advocacy of covert action against Iran are the most prominent examples” Clarke wrote then. “Such actions are not signs of a coherent, much less a prudent, approach … One [that] has failed to promote the evolution of stable, non-volatile relationships with … Russia and China. To the contrary, the United States is almost on the point of turning those two powerful nations into strategic adversaries, possibly even in alliance with each other. That disturbing possibility is being covered up by the rhetorical abandon with which administration leaders celebrate their ‘success’ on secondary issues. That may be effective politics [domestically], [but] is exactly the opposite of what is required. The successes … tend to be fragile or unfinished, puzzlingly remote from the nation’s true interests – or founded on ill-conceived diplomacy”.

“A brief look at U.S. policy on China illustrates the point. The array of contentious and mutually conflicting issues is intimidating: Taiwan, commercial opportunities, Beijing’s sales of advanced (including nuclear) technology, China’s increasing defence spending, territorial expansionism in the South China Sea, and human rights. In many of those areas, a classic American dilemma between realism and idealism exists. But the administration has done little to resolve that dilemma; or to consider what level of risk the United States should be willing to incur in pursuit of specific objectives”.

“In November 1995 Joseph Nye, at the time assistant secretary of defence for international security affairs, answered Chinese questions about the potential U.S. reaction to a Chinese move against Taiwan with the vague statement that “it would depend on the circumstances”. That formulation might be forgiven as a justifiable public circumlocution on an extremely delicate matter if there was any sense of confidence that the administration in private knew how it wished to proceed and was making dispositions on that basis. But U.S. officials do not even seem clear in their own minds whether American democratic values are sufficiently on the line in Taiwan, to risk a military confrontation with Beijing”.

That was written two decades ago! Since then, the U.S.’ successive pursuit of hollow ‘tub-thumping’ has, as Clarke forewarned, duly turned both Russia and China into adversaries, and brought them into strategic military partnership. Just to be clear: Clarke was saying that the weight of these strategically-incoherent ‘victories’ constituted a contradiction that, one way or another, ultimately would implode American power.

Biden may not want all-out war with China, but nonetheless he desires to virtue signal American belligerence towards this rising power. And U.S. mainstream media presently are feasting on the Taiwan issue. What is the objective then? Conceivably the ‘success’ would be Taiwan’s ‘meaningful participation’ in the UN and other international bodies (magnified by western allies’ loud and repeated support). In a word, to ‘Kosovo’ Taiwan out of China’s orbit, just as Kosovo was separated, and pumped out from Serbia’s orbit.

These U.S. tactics will ensure the ultimate military defeat of the Taipei administration (and hence its ‘Kosovisation’ turns wholly ephemeral). Yet nonetheless, it will be presented as somehow a U.S. political success (‘standing up for democratic values’). This would be doubly so were the modus operandi to be extended to the majority-Muslim province of Jinjiang (where U.S. policy could be portrayed as both supporting human rights and diversity, too). And yes, the strategic cost would be there: Whatever trust for Washington there may be still lingering on in Beijing would have been shredded. China is now not only an adversary – It is set on winning.

In Ukraine, provoking even a limited Russian military intervention into eastern Ukraine would be hailed as a political achievement. Never mind the damage, the deaths; Europe would fall under full Washington control, and NATO would re-discover its raison d’être. But Europe and America would be weaker – and yet more of America’s traditional clients will assert themselves, through diversifying their relations, and projecting power through broader alliances. And the more they look eastward, the more deeply they engage with China.

For Iran, the ‘Capillary Action’ has begun: Iranian petrol stations have been subject to cyber attack; new U.S. sanctions have been imposed on IRGC figures; and ‘muscular’ virtue-demonstrations – on a par with the Freedom of the Seas naval sails-through of the Taiwan Strait – have begun. Over the last weekend, the U.S. flew a B-1B strategic long-range bomber over the Middle East, and specifically over the Strait of Hormuz near Iran, in what the U.S. Air Force called a ‘presence patrol’ to send a message to Tehran (the point being that the B-1B nuclear-capable bomber is capable of carrying America’s large bunker-busting bombs). Symbolically, at various points along the route – which went from the island of Diego Garcia in the Indian Ocean to Yemen and then through Israel and Jordan and then over the Persian Gulf – Israeli fighter jets escorted the bomber, periodically with others from Saudi Arabia, Bahrain and Egypt, too.

Another secondary success, notwithstanding America’s strategic risk in pursuing this path of ephemeral achievements? Israel’s intentions are wholly unpredictable, even should Blinken and Sullivan imagine that Tel Aviv would warn them first. “So”, the Israeli military commentator summed-up: “I believe that we’ll see the continuation of this low intensity conflict – though it not turning into a direct one – unless Israel decides to launch an attack on Iran’s nuclear facilities”.

Has the U.S. considered – per Clarke’s analysis – what level of risk it is willing to incur for ‘pulling in’ these secondary achievements (naval sail-throughs, and B-1B fly-bys)? Or is “rhetorical abandon” again the order of the day?

Success stories are needed in the wake of the Kabul withdrawal débacle, and this Administration is in a tearing hurry to give Biden the semblance of foreign policy success. Yet, the combined weight of such fragile, unfinished and strategically disconnected ‘successes’ will at some point badly rebound, in ways exceeding what a dysfunctional U.S. system can bear.

0 thoughts on “Losing Militarily & Strategically, in Order to ‘Win’ Politically (but Ephemerally)”