HOME / WORLD / U.S. Supremacy by Any Other Name 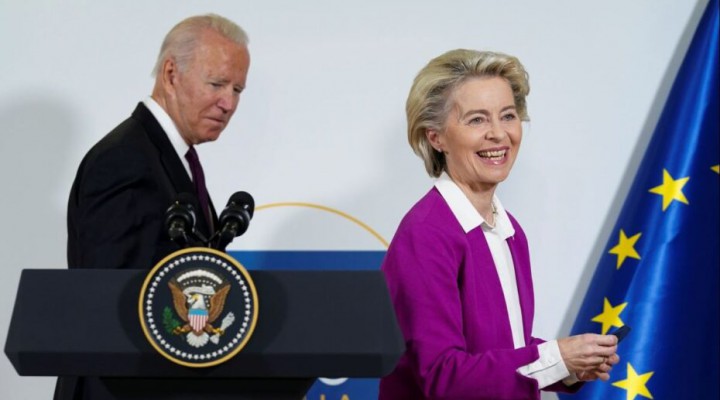 The world balance has changed qualitatively, and not just quantitatively

Speaking at the Aspen Security Forum two weeks ago, General Milley conceded that ‘America’s century’ is over – a long overdue acknowledgement, most might venture. Yet, belated or not, his saying it nonetheless seemed to signal an important strategic shift: “We’re entering into a tri-polar – world with the U.S., Russia and China being all great powers. [And] just by introducing three versus two you get increased complexity”, Milley said.

More recently, in a CNN interview Jake Sullivan, Biden’s Security Adviser, said that it had been a mistake to try to change China: “America is not seeking to ‘contain’ China: it’s not a new Cold War”. Mr. Sullivan’s remarks come a week after President Biden said the U.S. was not seeking “physical conflict” with China, despite rising tensions – “this is competition”, Biden said.

This indeed seemed to signal something important. But is it, though? This use of the word ‘competition’ is a tad curious as terminology, and requires a little unpacking.

CNN interviewer, Fareed Zakaria, asked Sullivan: So what is it, after all your ‘tough talk’, that you have been able to agree with China; what has been negotiated? One might imagine a response outlining how best Biden thinks to manage these competing interests in a complex tri-polar world. Well, that wasn’t Sullivan’s retort. “Wrong metric”, he said flatly: Don’t ask about bilateral agreements – ask about what else we have secured.

The right way to think about this, Sullivan said, is: “Have we set the terms of an effective competition where the U.S. is in a position to defend its values and advance its interests, not just in the Indo-Pacific, but around the world. In terms of our allies around the world, the U.S. and Europe are aligned around trade and technology issues to ensure that China cannot ‘abuse our markets’; and then on the Indo-Pacific front, we have advanced so that we can hold China accountable for its actions.”

“We want to create the circumstance in which two major powers will operate in an international system for the foreseeable future – and we want the terms of that system to be favourable to American interests and values: It is rather, a favourable disposition in which the U.S. and its allies can shape the international rules of the road on the sorts of issues that are fundamentally going to matter to the people of our country [America] and to the people everywhere”, he added.

The objective of the Biden administration was not to seek any political transformation in China, Sullivan pointed out, but to shape the international order to favour its interests, and of other like-minded democracies: “We want the terms of that coexistence in the international system to be favourable to American interests and values. To be set up so that the rules of the road reflect an open, fair, free Indo-Pacific region; an open, fair, free international economic system and where basic values and norms that are enshrined in the universal declaration of human rights are respected in international institutions”, he said. “This will be a competition as we go forward”.

Sullivan is proposing very starkly a rules based global order – “international rules of the road” – that would be crafted around one central strategic interest (that of America), with little regard to consequences that may result for others. That ‘open, fair, free international system’ is simply code for the western financialised neo-liberal system to go global. Josh Rogin wrote as much this week: “American-led internationalism, despite its flaws and missteps, remains the last, best hope for humanity.”

And just to be clear, when we hear of an open, free economic system favourable to American interests, it is not the ‘interests of the 99%’ that are being enshrined in the system, it is those of the 1% financial class, demanding the right to move their cash and credit anywhere, any time, without restriction.

Sullivan’s reference to Human Rights mirrors the ‘art’ of the EU, where the doctrine of the primacy of European Law has served as a convenient device to extend the Union’s central authority without rewriting the Treaties – or in this analogous case, for the U.S. extending its authority, and to proceed, without having to make bi-lateral agreements with China (or Russia), or anybody else. Sullivan was very clear on this point: Negotiated agreements with China were the wrong ‘metric’ by which to judge America’s policy success.

Initially, nobody in Europe bothered much when a general supremacy of EU values and law was ‘discovered’ by the European Court to be hiding within the EU treaties, (though to the naked eye, they were not so discernible). The muted reaction however, owed much to the fact that the jurisdiction of the EU at that time, was still rather narrow.

Later, the gentle, incremental upward transfer of national sovereignty to a centralised strategic interest (Brussels), became the principal engine for what came to be called ‘integration by law’. Over time, a deep reading of the Treaties (for Euro-treaties, read Sullivan’s ‘enshrinement’ of Universal Declaration of Human Rights) offered ever new reasons for subjecting democratic, national polities to a supra-national reading of a ‘higher interest’.

So too, the universal declaration of Human Rights will likely offer Sullivan new reasons and opportunities to weaponise the text in order to bend allies and ‘adversaries’ alike to the discipline of the central strategic interest (otherwise known as Washington).

So, what had seemed to signal a significant shift of U.S. thinking – after a little unpacking – turns out to be nothing of the kind. Great Power competition it turns out, is nothing other than the globalist, U.S.-centred, rules based world order. The U.S. abstains from ‘transforming’ (i.e. colour revolutionising) the CCP, because it can’t; that tool still applies to lesser fish (i.e. Nicaragua).

On the one hand, we have seen the consequences to this centralised ‘rules’ approach – whether practiced from Brussels or Washington: a sort of soporific torpor ensues. All energy is directed to keeping the creaking system aloft (whether the EU’s, or the American ‘rules of the road’), rather than finding real solutions. Cleavages open, that cannot be politically contained; resentments bubble away; crises are managed, not resolved; time is played for; reform is incremental and then, suddenly, unilateral; and, in the end, stasis reigns. It is called Merkelism in Europe (after the German Chancellor).

After the uneventful G20 summit in Rome, and COP26 in Glasgow, it looks like we are beginning to see the Merkelization of the world, as well. The sense that remains is one of a mechanism (two really if we include the EU), that makes convincing whirring and grinding sounds of fly-wheels spinning, and raises expectations of some result to pop down the final shute, yet little or nothing does – bar an ever deepening democratic deficit, as decisions formerly the realm of parliaments are transferred to a supra-national technocracy.

On the other hand, bad as this is (given the economic crises facing us), its greater ‘sin’ (as articulated by Sullivan) is his demand for global ‘rules’, whose scaffold is simply “the interests and values of the U.S. and its allies and partners”. Sullivan says that the U.S. no longer seeks to transform China’s system (that is good), but insists that China operate within an ‘order’ built around U.S. interests and values – tout court. And, as Sullivan indicated, U.S. diplomatic effort is to be directed at coercing Chinese compliance to this system. Nowhere are the costs to allies mentioned, who would have to forego their relations with China or Russia, in order to please Biden.

The bigger ‘sin’, quite simply, is that the time for such haughty ambitions has passed. The world balance has changed qualitatively, and not just quantitatively. Both China and Russia – the other two components to General Milley’s tri-partite world – have said it plainly enough: They refuse lectures by the West.

Is a Multipolar World the Answer to U.S. Imperialism? w/ Vijay Prashad

China According to the West Vs. China for Real

One thought on “U.S. Supremacy by Any Other Name”