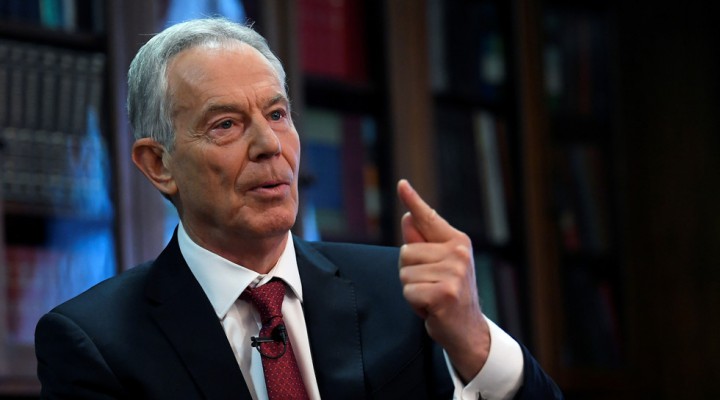 For many observing the British government’s fiasco over the Covid-19 pandemic, it is like watching a rerun of the Dad’s Army sitcom. Then enters former PM Tony Blair and the mood quickly horrifies.

Blair, who has been out of office for nearly 13 years, suddenly made a comeback on certain media outlets this week and was treated by his hosts as if he were some kind of political paragon, offering his “sage” advice on how the government should handle the current crisis.

Careful to not sound too arrogant, the unctuous Blair prefaced his remarks as “constructive criticism” but then went on to propose sweeping reorganization of government strategy. The non-governmental “skill sets” that he advised no doubt is a pitch for private consultants like Blair to be contracted to Whitehall.

Understandably, a lot of the public were infuriated that Blair should be treated so royally, including as a guest on the taxpayer-funded BBC, to be fawned over by presenters seeking his presumed wisdom.

Regardless of the present government’s botched handling of the Covid-19 crisis, why is a has-been prime minister being given such a prime platform to lecture. Blair makes his advice sound like technocratic expertise when it’s a blatant bid for rehabilitating his credentials. Reorganizing government departments and civil servants? Many ordinary citizens could define the Covid-19 problem more accurately and simply as chronic underfunding of national health services from years of neoliberal austerity.

But the most galling thing about hearing Tony Blair’s smug and self-aggrandizing tone this week is the insult to basic morality. Blair should be serving time in jail for the war crimes he presided over in launching the US-led war on Iraq. That war left more than a million dead, with millions more wounded and ravaged by poverty. An ancient nation was destroyed, which spawned terrorism across the Middle East, a horrific legacy with which countries are still struggling. Blair was instrumental in launching the US and British war on Iraq and he aided and abetted war in Afghanistan, both of which have piled up the American and Britain’s national debts.

In a very real way, the burden of war debts on the public is a factor in why health services have been underfunded and why when a much-predicted pandemic finally did hit, the US and Britain have been singularly remiss in dealing with. Both are projected to have the worst death tolls in the world from the disease.

To see Blair offering his tuppence worth of crisis management is truly nauseating. That he can be indulged by British media without a hint of shame about his warmongering past really shows how morally and intellectually brain-dead the British political class is. The hypocrisy of such people is that they find fault with other world leaders, from China to Russia, Iran to Venezuela or North Korea, yet here they are sucking up to a man who has the blood of millions on his hands. It just shows the tacit arrogance of British imperialism. Supposedly smart or liberal media-types are oblivious to how shockingly unacceptable it is to have Tony Blair anywhere near the airwaves.

But hold on a cynical moment. Blair might find a new purpose after all. He was the guy who used his rhetorical “skill sets” to sell the war on Iraq to the American and British people, and indeed to the rest of the world. It was Blair and his barrister-like poise that elevated the lies and propaganda of weapons of mass destruction into something with a modicum of gravitas. His American counterpart President G.W. Bush was able to carry off an outrageous act of genocidal aggression largely on the rationale forged by Blair.

Which brings us to the present Covid-19 crisis. President Trump and deranged anti-China hawks in Washington want to turn this pandemic into a lynching of Beijing. “China has blood on its hands,” goes the mantra. “China must pay” for the deaths of Americans and the economic disaster that has fallen on Trump’s otherwise “success story.”

The narrative is building to blame China, which Washington accuses of “misinformation” and “deception” by “covering up” the initial outbreak, thereby leaving other nations vulnerable to the pandemic. This is of course audacious scapegoating by an American ruling class and dysfunctional economic system which betrayed the health needs of millions of Americans.

The propaganda assault underway against China has echoes of the earlier false narrative about weapons of mass destruction in Iraq. It is essentially about pushing claims and dubious “facts” to fit an outcome of conflict. War in the case of Iraq; and financial exploitation of China by making China take the rap for the Covid-19 pandemic. The latter scenario would most likely lead to war too.

What better person for the American agenda of falsifying the pandemic than Tony Blair? If he is rehabilitated into government as a private consultant, one can imagine how his remit will be easily extended to “corroborating” US claims that China is to blame for the pandemic.

If that seems a stretch then why are media presenters still giving Blair the time of day? If they can’t seem to understand how repugnant it is to have someone as vile as Blair on their comfy programs then it shows that anything is possible.