HOME / WORLD / Who Gains From Ratting on Johnson in Bombshell Report? 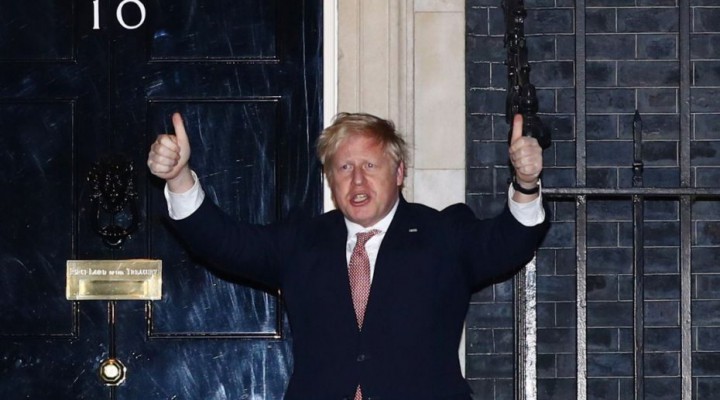 It seems that the damning report on Johnson’s hands-off approach before he became ill also comes amid signs of infighting among senior government ministers about how Britain exits from its weeks-long lockdown policy to contain the deadly pandemic.

It could be seen as a fatal blow to Boris Johnson’s premiership. A bombshell report at the weekend revealed the British prime minister had declined to attend five emergency cabinet meetings in the lead-up to the Covid-19 crisis. He is accused of “sleepwalking” Britain into disaster.

As Britain’s death toll from the pandemic continues to soar – with projections that it could end up the worst in Europe – Boris Johnson will be in for intense heat from public anger. Sympathy for his own personal recovery from the disease will soon recede as the public demands a reckoning for Britain’s grim epidemic.

Coincidentally, it seems, the damning report on Johnson’s hands-off approach before he became ill also comes amid signs of infighting among senior government ministers about how Britain exits from its weeks-long lockdown policy to contain the deadly pandemic.

Minister for the Cabinet Office Michael Gove and the finance minister Rishi Sunak are reportedly keen to speed up Britain’s return to normal business, while Prime Minister Johnson and the health minister Matt Hancock are more cautious about lifting the public lockdown out of fears that a second wave of infection may occur. Both Johnson and Hancock suffered from Covid-19 infection which may account for their more wary position. Indeed earlier this month, Johnson spent several days in hospital intensive care while in a critical condition.

The tensions at the core of the British government over handling the Covid-19 crisis may explain the extraordinarily damaging report by the Sunday Times painting Johnson as woefully complacent in the face of the pandemic. The rightwing press owned by Rupert Murdoch usually have a favorable and indulgent attitude towards Johnson. He used to write a column for the tabloid Sun. Something has changed like a switch, however, in that crony relation.

To reveal that Johnson was absent from five emergency cabinet meetings during January and February is tantamount to making the case for his sacking from office. The prime minister is portrayed as being feckless and complacent, more concerned about enjoying weekend breaks at his official country residence at Chequers than dealing with a national emergency.

What’s more, the source for this damning information is described as a “senior Cabinet aide” – which could mean a ministerial colleague.

Let’s get this clear. What is reported of Johnson’s blasé behavior is unquestionably a sackable offense. Under his “leadership”, the British government acted with criminal complacency in preparing the country for the pandemic. Johnson personally downplayed the severity of the oncoming crisis during crucial weeks when the British authorities should have been reinforcing the public health service with testing facilities and vital personal protection equipment for medical staff. The lockdown declared at the end of March was “too little too late”. Johnson’s own personal fate of contracting the disease can be seen as him being a victim of his own government’s shambolic policy.

But in truth, it is not only Johnson who should be sacked. Arguably, his entire Cabinet should be forced to resign and held to account for dereliction of duty to protect the public.

The Sunday Times “exposé” suggests, however, that a power grab is underway within the Tory command. Ever since Johnson’s illness compelled him to hand over prime ministerial powers to his foreign minister Dominic Raab, there has been a power vacuum at the heart of government. Michael Gove previously had ambitions of becoming prime minister until Johnson won that position last July. Gove is understood to begrudge being overshadowed by the lesser qualified Raab whose public performances have been criticized for lack of authority.

With Boris laid low from his bout of Covid-19, there is thus an opportunity for power play and settling of old scores.

These tensions are also no doubt being exploited by the rightwing, pro-business lobby which, as in other countries, want to see the economy being returned to “normal” even if that means pushing consumers and workers prematurely back to unsafe social conditions detrimental to public health. Murdoch-owned Fox News has been a big proponent of public protests against prolonged lockdowns across the US.

It’s not hard to imagine how the Murdoch-owned media – which is a preeminent mouthpiece for big business and oligarchic private capital – would find the likes of Michael Gove and others in the British Cabinet favoring early exit from lockdown more appealing than Johnson and his more cautious colleagues.

That’s why the media exposé of Johnson and his non-attendance of Cabinet emergency meetings has more an air of political hatchet job than investigative journalism.

It seems curiouser too that it was Gove who confirmed in follow-up media reports that the claims about Johnson’s absence were true.

Gove, who is closely aligned with the Murdoch media having been a columnist for the London Times, went on to apparently defend his boss in Downing Street, by saying that it was “grotesque” to suggest that Johnson was not fully informed and committed to dealing with the Covid-19 crisis. This the equivalent of damning with faint praise after inflicting fatal damage.

Coming out of lockdowns will be a challenge for nations. The question of risking a relapse of Covid-19 pandemic requires a major balancing act. Governments’ decisions must be driven by the science of epidemiology, not by profit interests of big business who will exploit popular grievances about denial of freedom.

British government splits and media dirty tricks suggest big business is eagerly working on Downing Street to push its profit interests regardless of what is safe for public health. Even if that outcome means risking many more lives in the long run. Johnson’s corrupt incompetence and that of his government makes them easy prey for manipulation by corporate scavengers.

0 thoughts on “Who Gains From Ratting on Johnson in Bombshell Report?”