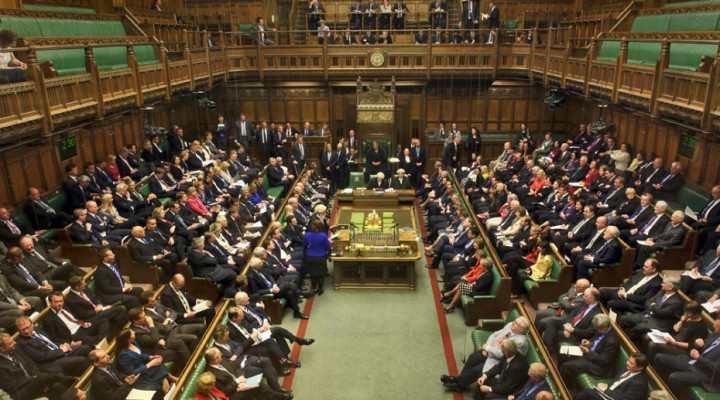 In all the hullabaloo of Brexit and its associated parliamentary infighting, little noticed has been how Dominic Cummings and Boris Johnson are attempting to change the very nature of the UK political landscape.

In all the hullabaloo of Brexit and its associated parliamentary infighting, little noticed has been how Dominic Cummings and Boris Johnson are attempting to change the very nature of the UK political landscape. Of course, the Brexit angst is making the attempt to leverage a strategic political shift much more visible, and more acute. Yet, actually the changes are not wholly, or even predominantly Brexit related, but reflect underlying tectonic plates clashing.

The point here is that the chaos in London is no parochial British, Brexit affair. It reflects something wider at work. Recognition of ‘plate’ movement already has been politically leveraged in the US (by Trump), and almost certainly the similar symptoms will present themselves across Europe too. These symptoms are here now (though they may not always be recognised as such, as one commentator already has noted – see later).

“The last Conservative MP in the seat of Newcastle-under-Lyme was Charles Donaldson-Hudson”, Daniel Capurro writes. “A JP [a local Judge] and member of the landed gentry, he held it from 1880 to 1885. Yet, when the autumn election finally arrives, Newcastle [a Labour bastion, ever since] will be one of the Tory party’s top target seats. The targeting of such seats is not the madness it might first appear. It is, in fact, part of Boris Johnson and his chief adviser Dominic Cummings’ masterplan for the future of the Conservative Party”.

A little back-context is required: In the late 1990s, the then leader of the Labour Party started to move the Party away from its roots in the Trade Union and labour rights movement, towards a ‘Washington Consensus’, neo-liberal stance, as epitomised by Tony Blair (who was drawing on the then Clinton winning experience). Labour had begun to understand that the endorsement of Wall Street and the City of London was a perquisite for any return to Office, and that in any case, the factory-based politics of the past, in this shiny, new cosmopolitan world of the urban and suburban élite, simply would not propel the movement into power.

Labour, at that moment, wished to become a typical Euro Centre-Left party, representing middle class voters who wanted to display their decency by voting for a party that espouses some, albeit quite restricted, notion of ‘social concern’.

But, as the preoccupations of the élite, metropolitan consciousness turned more and more ‘globalist’-espousing ‘disadvantaged’ groups, such as ethnic minorities, women, and gender non-conformists, rather than show empathy for the stresses of ordinary working men and women (whom they came to regard with contempt, as Ludite backwoodsmen and racists), so the Party’s internal gap opened wide.

This is the opening Cummings and Johnson have espied. The new demographics they believe, require rewriting the electoral landscape. Out is the Conservative electoral coalition of the recent past, which married urban and suburban social liberals with rural small-c conservatives (a marriage which was itself a cause of an internal tension, not dissimilar to that in the Labour Party – and as witnessed by the Tory 21 ‘Remainer’ rebels who were expelled from the Party). Centrism, in short, is no longer seen as advantageous. And, in comes a working-class, socially-conservative politics targeted at non-graduates in the Midlands and the North of England – i.e. at the Sixty-percenters as a whole.

“In this viewing, an extraordinary array of Labour seats [most of whom voted Leave] from Wrexham and Wakefield to Stoke-on-Trent Central and North could tumble into the Tory column on election night, and send Mr Johnson into Downing Street with a commanding majority”, Capurro suggests. Yes, the price may involve the loss of Conservative seats in London and the South East, but in practice the former electoral prize contested by both the main parties – the urban middle class – is itself suffering stress from globalist dynamics, as it bifurcates into the truly rich élite, and a struggling, belt-tightening Middle Class.

The Establishment élite sees the threat: This might – in the long game – end with the enthronement of the politics of the ‘deplorables’, and the eclipse (or ‘obsolescence’ in President Putin’s terminology) of liberalism.

Hence the bitter counter-revolution being mounted by the Establishment in the UK Parliament and the media. And hence the deep Establishment distrust of Johnson, for although he may represent the epitome of Establishment in one sense, he has always tried to position himself as the archetypical ‘outsider’.

The Northern working-class votes are those which Johnson wants to capture most dearly. Dominic Cummings knows from the ‘Leave’ campaign, and from Trump’s successes in US states not traditionally regarded as voting ‘Red’, that a focus on the culture ‘war’ – on issues such as transgender rights and ‘political correctness’ – can mobilise today’s voters, more than traditional family party affiliations. Cummings precisely intends to lever the toxicity of globalism not just with the ‘deplorables’, but with a Middle Class increasingly fearful of slipping into the abyss.

There are many problems to this evolving contestation of prevalent liberal millenarianism. A major problem is much more subtle, and less amenable to solution, than just the outbreak of ‘culture war’ – and it applies to all western economies: How – in this post-heavy-industry era – to maintain large-scale employment particularly for those with low (or no) skills.

Globalism unquestionably has contributed to the off-shoring of jobs to other parts of the globe, but the reality is that many of those jobs are not coming back ‘home’. They are assimilated elsewhere. They are lost for good.

The ‘new normal’ being touted by the US Administration is one that is not particularly concerned to re-capture, and bring home, mundane manufacturing processes. It wants for the US, the ultra high-tech end of manufacturing mainly, or only. This, it views, will represent the commanding heights of the new economics. And this view evidently is orientated more towards the objective to maintain US hegemony, than rather than for concern for the welfare of the US people. Such an economy – even if it were feasible to achieve – concentrated in the ultra high-tech, would face the issue of the 20% of Americans who then would become ‘unnecessary’ – surplus to needs, as it were. Do we really want to go there …?

Globalisation has had a great deal to do with this, but the decline of the factory-based economy in the West lies right at the very heart of our troubled political landscape (as Trump’s appeal to the ‘deplorables’ from a stance on the Nationalist-Right, rather than the globalist Left, strongly suggests).

Thibault Muzergues, European director of the International Republican Institute, warns that a structural divorce between the people and their representatives is in play. This happens once state institutions are viewed as a brake to preserve a status quo that is already in dispute, and in crisis. In other words, the Establishment counter action, and its rhetorical flourishes (i.e. describing the prorogation of the UK parliament as (literally) a coup d’état) in order to facilitate the crushing of the threat of ‘deplorablism’, precisely sets the ground for more bitter internal European strife.

“Some extol the unwavering will of the British leader [Johnson] to do what is necessary (within the limits of his constitutional rights, at least as long as the British courts will not block him) to put an end to the debate on Brexit by respecting the popular will … whilst others [in juxtaposition], praise the virtue of the [Italian] President for saving parliamentary democracy – in the face of the risk of a Salvini government … [coming to power].

“In both cases we are confronted with a conflict between direct democracy and parliamentary democracy, but this is not necessarily what is played out in the minds of actors, let alone citizens. For them, it is not so much a crisis of the institutions; but rather that of a crisis around Brexit, or in the person of Matteo Salvini.

“This is a very dangerous game because it prepares the excessive politicization of institutions in a context of polarization of debates, and their use for partisan ends only – which undermines their legitimacy a little more. Without these institutions to manage or even settle our political conflicts, there is little that separates us from civil war or, as Hobbes described almost four centuries ago, from bellum omnium contra omnes, the war of all against all. The slope we are currently following is therefore necessarily dangerous.”

But in comparing Johnson to Viktor Orban —as Austrian newspaper Der Standard did, with its London correspondent writing “Johnson and his henchmen clearly think Brexit is more important than democracy and the rule of law”; with Germany’s international public broadcaster DW calling “Boris Johnson, the UK dictator,” and Yascha Mounk in France’s Le Monde newspaper writing that suspending Parliament constituted the “most flagrant attack on democracy that Britain has ever known”, there is a distinct whiff of that old Viet Nam axiom of ‘destroying a village to ‘save’ a village’ metamorphosing into one of having a constitutionally legitimate British government overturned and destroyed, in order ‘to save democracy itself’ (and to save Britain from elections which might not produce the ‘correct’ outcome’).

If populism blighted “the most entrenched of democracies,” said an editorial in Le Monde, it “would be terrible news for the entire continent.” Well … welcome to the new Grand Inquisition: Does the prisoner (Johnson) confess before the Holy Inquisition that Parliament was suspended for heretical motives; or will he deny it, and face being burnt at the stake?