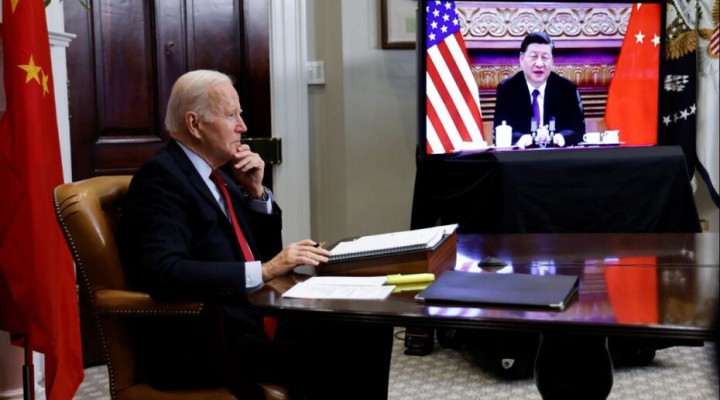 While both leaders appeared to be cordial there was little sign that Washington has changed its fundamental position of antagonizing China.

First though, some background. It seems oddly complacent that it has taken nearly 10 months since Biden entered the White House for these leaders to finally get around to engaging in substantive talks given the urgent context of fraught relations.

Some observers will see the conference held online on November 15 as a welcome move to put the brakes on a dangerous dynamic that is potentially leading towards military confrontation. But a closer look beneath the optics of the meeting reveal that there was no removal of the fundamental source of tensions, which is US hegemonic ambitions, according to Boyle.

The online summit was initiated by Biden and lasted for more than three hours. The American side gave the event high-profile TV coverage. Chinese media tended to welcome the meeting as signaling a possible turning point for improved relations. However, while both leaders appeared to be cordial there was little sign that Washington has changed its fundamental position of antagonizing China, a policy that is leading to armed conflict in particular over Taiwan.

Professor Francis A. Boyle comments in the following interview that both sides remain entrenched in opposing positions. He notes that President Xi warned the Americans that China would not tolerate any interference promoting Taiwan’s independence. For his part, Biden said the US maintains its so-called One China Policy recognizing Beijing’s sovereignty over Taiwan. But at the same time, Washington retains “strategic ambiguity” which gives itself license to supply Taiwan with military weapons, a policy that is emboldening Taiwanese declared independence from the mainland.

From the White House readout of Biden’s comments, the US side also arrogates a presumptive right to lecture China over alleged human rights abuses. Objectively speaking, this US position is cynical and provocative given its blatant hypocrisy over its own record of gross human rights abuses, past and present, as Boyle has extensively documented in his scholarly and legal work over several decades. For Biden to keep pushing this arrogant charade as with previous administrations is proof that Washington is not capable of conducting relations based on mutual respect, which Xi called for.

Boyle points out that the disastrous retreat by the US from its failed war in Afghanistan is largely motivated by Washington’s geopolitical need to confront what it views as the primary challenge to its global power stemming from an ascendant China and an emerging multipolar world. Afghanistan does not represent “an end to American wars”, as Biden claimed. It is more a conservation and redirection of imperial power. In that regard, the online summit with Xi initiated by Biden is merely more deception and duplicity by the US side, which does little to mitigate dangerous tensions.

Francis Anthony Boyle is Professor of International Law at the University of Illinois College of Law. He is an alumni cum laude of Harvard School of Law. Boyle has served as counsel for Bosnia-Herzegovina and an advisor to the Palestinian Authority. He is a long-standing critic of US policy supporting Israel’s occupation of Palestinian territories which he has condemned as genocide. Boyle has denounced US governments over foreign policy that systematically promotes war and the oppression of indigenous peoples. He is author of numerous books, including The Criminality of Nuclear Deterrence; Destroying Libya and World Order: The Three-Decade US Campaign to Terminate the Qaddafi Revolution; World Politics and International Law; Destroying World Order: US Imperialism in the Middle East Before and After September 11; and Foundations of World Order: The Legalist Approach to International Relations.

Question: After the online summit this week between US President Joe Biden and Chinese counterpart Xi Jinping, do you see any grounds for optimism for US-China relations improving and “veering away from conflict” as President Biden put it?

Francis Boyle: No. President Xi read the riot act to Biden on Taiwan. So far, I have seen no evidence that Biden is backing down on his support for the Taiwan independence movement.

Question: Was it significant that the summit was requested by Biden in the first place?

Francis Boyle: Yes. This was basically a public relations gesture by Biden to convince the American people and the world that he was really doing something to calm the situation down when in fact on the ground in Taiwan and in the seas of the Taiwan Strait and in the South China Sea he is doing the exact opposite. I am sure President Xi is paying attention to what Biden is doing, not what he is talking about in a virtual summit that Biden broadcasted in the media for propaganda purposes. As Machiavelli said in The Prince, the Prince must learn to be a fine liar and hypocrite. That’s Joe Biden!

Question: Biden told Xi that the US still supports the One China Policy. Do you see this statement lowering tensions over Taiwan?

Francis Boyle: Of course. Like all US administrations going back to Jimmy Carter, they have all used “human rights” as a propaganda weapon against their designated adversaries. Meanwhile, look at what successive recent US governments have done to the Palestinians, or the Libyans, or the Iraqis, or the Syrians, or the Somalis, or the Yemenis, or the Afghans, etc. Massive death and destruction all over the Middle East and Central Asia.

Question: China’s President Xi often talks about how China is no longer the weak giant of former times when the US and European imperial powers dominated it as for example during the 19th Century Opium Wars. Would you agree that there is a new historic reality of US imperial decline in a multipolar world where China is more than capable of determining relations?

Francis Boyle: Yes. The United States government just suffered the most catastrophic defeat since Vietnam in Afghanistan. They have learned nothing from it. Indeed, Biden said that they are leaving Afghanistan in order to better confront China. QED.