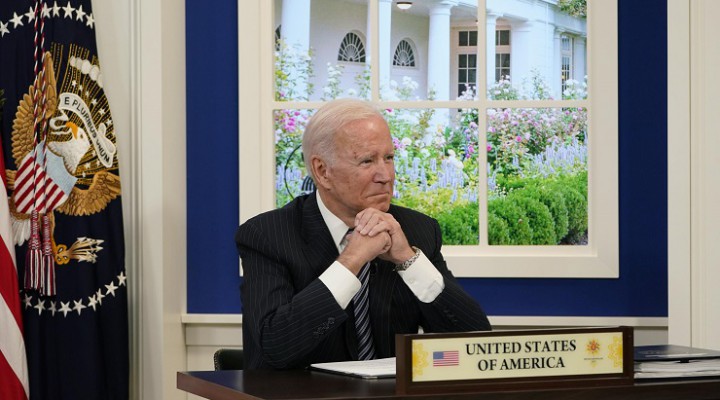 For the first time in four years a US President has attended the annual ASEAN (the Association of Southeast Asian Nations) summit. In a poorly disguised redux of the Obama-era “Pivot to Asia,” the US seeks to appear interested in contributing to ASEAN in a constructive manner while ultimately attempting to coerce the regional bloc into a confrontation with China on Washington’s behalf.

Reuters in its article, “Biden to be first US president to join ASEAN summit in four years,” all but says as much, noting:

US President Joe Biden will take part in a virtual summit with the Association of Southeast Asian Nations (ASEAN) on Tuesday, the first time in four years Washington will engage at the top level with a bloc it sees as key to its strategy of pushing back against China.

Since even the Western media itself makes little secret of America’s desire to use ASEAN as a cudgel against its rival China, it wasnt trickery the US employed to make its recruitment pitch but rather through the use of an overdeveloped “stick” and a supply of increasingly unpalatable “carrots.”

Citing an Asian diplomat who preferred to remain anonymous, Reuters would report:

“The piece that is most important for the region, is the economic piece,” the diplomat said. “We’re kind of stuck in that the region says: ‘You’ve put in place a strategic sort of competitive structure with China, but this doesn’t benefit the region at all. And, meanwhile, all of us have got economic relationships growing with China.’”

ASEAN is abundantly aware the US seeks to use ASEAN against China for Washington’s own benefit and at the expense of everyone else in the region. Australia currently serves as a case study for the Indo-Pacific region to consider when propositioned by Washington to “choose sides.”

ASEAN would prefer not to pick sides and benefit from constructive ties with all nations, but as the US has proven over and over again not only in the Indo-Pacific region but around the globe – not picking a side is not an option. If ASEAN was forced to pick a side, it takes little imagination to guess which side that would be.

ASEAN’s largest trade partner by far is China. After China, most ASEAN member states do the majority of their business within ASEAN or within Asia. While the United States serves as the second largest single trade partner for several ASEAN nations, no conceivable offer could be made or any reasonable alternative found to replace economic ties with China.

Chinese tourists introduced to Thai durian while on holiday in Thailand has driven a large and still growing export market for the fruit from Thailand to China.

All of this – not just trade on its own – would be placed in danger by ASEAN “siding” with the US against China, and all in exchange for Washington’s meager “carrots.”

These carrots include, according to Reuters, “COVID-19 vaccine distribution, climate change, supply chains and infrastructure.” However China is also capable of and has been supplying vaccines to ASEAN member states.

Offers by the US to shift manufacturing from China to ASEAN member states would be an actual benefit for ASEAN but surely not at the cost of giving up or even so much as reducing relations with China.

In terms of infrastructure, the US and its “Build Back Better World” (B3W) remains confined to ambiguous references to equally ambiguous proposals usually swirling around financing schemes rather than the sort of tangible technical expertise actually required to build meaningful projects needed in the region.

US hand-waving regarding infrastructure is being done while China has finished a high-speed rail line connecting landlocked Laos to China in the north and Thailand to the south, delivered the nation’s first high-speed passenger train, and is now preparing the line for operations this year. Chinese-built high-speed rail is also under construction in Thailand which will extend the Laos segment deep into the heart of Southeast Asia.

China in recent years has also commissioned dams, built highways, and constructed bridges across Southeast Asia. These projects are now powering the region and moving people and goods across it. US companies are indeed building factories across ASEAN and are surely positive contributions to the region’s economy, but again, not nearly enough to convince any ASEAN member state let alone the bloc collectively to pivot from East to West.

Reuters in its article also mentions the US seeking to work with ASEAN to address “common challenges on maritime issues.” Reuters speculates this is in reference to disputes in the South China Sea. But as has been pointed out many times before – these disputes are neither unique to the region nor confined to disputes between China and ASEAN member states alone. ASEAN member states have overlapping claims and thus disputes with one another as well. In all cases bilateral negotiations and resolutions are preferred, with the prospect of these disputes escalating into a conflict being otherwise unimaginable.

The US has injected itself into these disputes and through a combination of coercion, legal interference, and influence exercised over the region’s media, it is attempting to transform these disputes into animosity and even conflicts its arms industry can profit from and its military can use as a pretext to entrench itself even deeper into the region with.

Repeated attempts to recruit ASEAN into America’s ongoing efforts to engineer conflict with China have failed. The conception of “AUKUS” is a very visible representation of this failure. The only nations the United States has managed to rally against China are Australia  which, like the United States, is not located in Asia but instead Oceania, and the United Kingdom which dwells all the way in Western Europe surrounded by the Atlantic Ocean.

The nations in Asia the US claims are threatened most by China seem concerned the least with Beijing and instead are increasingly weary of US posturing through alliances precisely like AUKUS.

Ideally, American manufacturing and Chinese infrastructure and trade would provide the maximum benefit for ASEAN representing the best of both worlds – and in a multipolar world this is precisely what the region would be attempting to acquire. Yet under the current US-led “international rules-based order,” a euphemism for American hegemony, remaining neutral and building a mutually beneficial balance of power is not an option.

For nations and even blocs who refuse the carrots laid out for them by Washington, there awaits an overdeveloped and all too oftenly used “stick.”

In the case of ASEAN it comes primarily in the form of political subversion and economic sabotage. The United States through its National Endowment for Democracy (NED) cultivates a number of anti-China opposition groups across ASEAN making up what the Western media calls the “Milk Tea Alliance.” Precisely because no current government in ASEAN is interested in turning China into an enemy and transforming Asia into a battlefield, the US is attempting to replace them with client regimes that will.

Aung San Suu Kyi and her National League for Democracy in Myanmar, Thaksin Shinawatra and Thanathorn Juangroongruangkit and their respective political parties in Thailand, Anwar Ibrahim and his political coalition in Malaysia, and Sam Rainsy along with Kem Sokha in Cambodia represent US-backed opposition parties serving this particular role. They are augmented by violent street movements and in some cases armed groups working together within their respective nations but also regionally to reshape ASEAN into a united front against China.

As this US-sponsored political subversion unfolds – a repeat of the 2011 US-sponsored “Arab Spring” – the US and its Western allies target and batter ASEAN’s economy particularly in industries China plays a large role in including tourism and agricultural exports.

It is this combination of unpalatable carrots and oversized sticks the US is using to coerce ASEAN into “pushing back” against China – a notion ASEAN otherwise benefits in no way by entertaining. The damage US-backed militants are doing to ASEAN-member Myanmar currently, which includes attacks on Chinese factories and a crucial pipeline that constitutes part of the Belt and Road Initiative (BRI), is an instructive demonstration of how powerful and dangerous the US and its “soft power” still is.

ASEAN’s choices are to capitulate and join the US in forming a united front against ASEAN’s largest trading partner and in turn giving up wealth, prosperity, development, and regional stability or to unite in the face of this coercion, putting into place the mechanisms needed to take the tools of American “soft power” off the table and leave only for the US the option of pursuing a constructive, mutually beneficial role n the region.

ASEAN’s decision to exclude Myanmar’s current leader, General Min Aung Hlaing, from the summit is an ill omen that might appear to suggest capitulation. But it could also be a means of buying time. The balance of power tilting in China’s and the rest of Asia’s favor improves year-to-year. This time next year the US will be in a weaker position still, not a stronger position. By delaying the worst and most desperate measures the US could resort to for as long as possible, ASEAN and China could “run out the clock” for US primacy over Asia.

While that strikes many in Washington and on Wall Street as apocalyptic – and for their “international order” it is – for the United States, its people, and even many of its most constructive industries – it is precisely the opposite. It will be an opportunity for the US to redefine its role globally as a powerful nation contributing among all other nations, rather than a declining hegemony struggling to impose itself above all nations.

US Bullying ASEAN to Turn on Myanmar, Create the Next “Libya”

Inflection EP20: China Builds Up ASEAN, the US Bullies it…

How will AUKUS Impact Thailand & the Rest of ASEAN?

US-Singapore Relations: Being of Use vs. Being Used