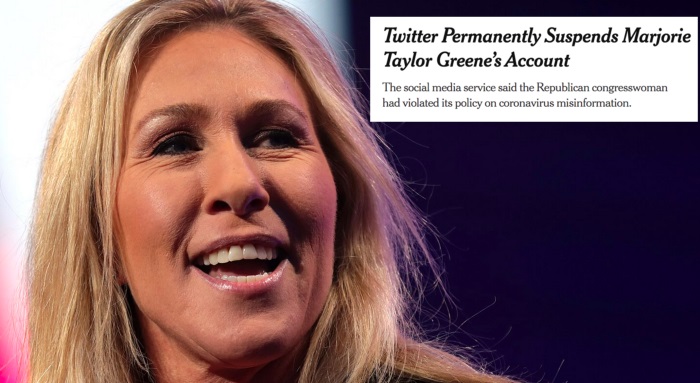 Twitter has permanently suspended the personal account of Republican Congresswoman Marjorie Taylor Greene for what the platform calls “repeated violations of our COVID-19 misinformation policy,” much to the delight of liberals and pro-censorship leftists everywhere. This follows the Twitter ban of Dr Robert Malone on the same grounds a few days prior, which followed an unbroken pattern of continually escalating and expanding censorship protocols ever since the 2016 US election.

I myself had already written many, many articles warning warning about the increasingly widespread use of internet censorship via algorithm manipulation and deplatforming long before the first “Covid misinformation” bans started happening. Arguably the most significant political moment in the US since 9/11 and its aftermath was when liberal institutions decided that Trump’s 2016 election was not a failure of status quo politics but a failure of information control, which just so happened to align perfectly with the agendas of the ruling power structure to control the dominant narratives about what’s going on in the world.

Having unelected tech oligarchs ban duly elected members of Congress – or even the sitting President – from using their massive platforms is dystopian. Remember how many world leaders warned that FB & Twitter's banning of Trump was a threat to democracy.https://t.co/zIT7l04hMW https://t.co/2BPFrgeZXv

We saw this exemplified in 2017 when Google, Facebook and Twitter were called before the Senate Judiciary Committee and instructed to come up with a strategy “to prevent the fomenting of discord”.

“We all must act now on the social media battlefield to quell information rebellions that can quickly lead to violent confrontations and easily transform us into the Divided States of America,” the social media giants were told by think tanker and former FBI agent Clint Watts, who added, “Stopping the false information artillery barrage landing on social media users comes only when those outlets distributing bogus stories are silenced — silence the guns and the barrage will end.”

Since that time the coordination between those tech platforms and the US government in determining whose voices should be silenced has gotten progressively more intimate, so now we have these giant platforms which people have come to rely on to share ideas and information censoring speech in complete alignment with the will of the most powerful government on earth.

The danger of this is obvious to anyone who isn’t a stunted emotional infant. The danger of government-tied monopolistic tech platforms controlling worldwide speech far outweighs the danger of whatever voice you might happen to dislike at any given moment. The only way for this not to be clear to you is if you are so psychologically maladjusted that you can’t imagine anything bad coming from your personal preferences for human expression being imposed upon society by the most powerful institutions on earth.

It really only takes the tiniest bit of personal growth to understand this. I for example absolutely hate QAnoners. Hate them, hate them, hate them. They always used to make my job annoying because they saw my criticisms of the mass media and the oligarchic empire as aligning with their view that Donald Trump was leading a righteous crusade against the Deep State, so they’d often clutter my comments sections with foam-brained idiocy that perfectly served the very power structures I oppose. They saw me as on their side when in reality we had virtually nothing in common and couldn’t really be more opposed.

When QAnon accounts were purged from all mainstream social media platforms following the Capitol riot, it made my work significantly less irritating. I no longer had to share social media spaces with people I despised, and, if I were an immature person, I would see this as an inherently good thing. But because I am a grown adult, I understand that the danger of giant monopolistic government-tied platforms controlling worldwide human speech to a greater and greater extent far outweighs the emotional ease I personally receive from their absence.

I therefore would choose to allow QAnoners to voice their dopey nonsense freely on those platforms if it were up to me. Whatever damage they might do is vastly less destructive than allowing widespread communication to be regulated by powerful oligarchic institutions who amount to US government proxies. The same is true of Marjorie Taylor Greene and everyone like her.

This should not be an uncommon perspective. It doesn’t require a lot of maturity to get this, it just requires some basic self-preservation and enough psychological growth to understand that the world should not be forced to align with your personal will. It says bad things about the future that even this kindergarten-level degree of insight has become rare in some circles.

The Digital Control & Censorship of our World

0 thoughts on “Those Who Support Internet Censorship Lack Psychological Maturity”