HOME / SOCIAL/CULTURAL / The Facebook Team that Tried to Swing Nicaragua’s Election is Full of U.S. Spies 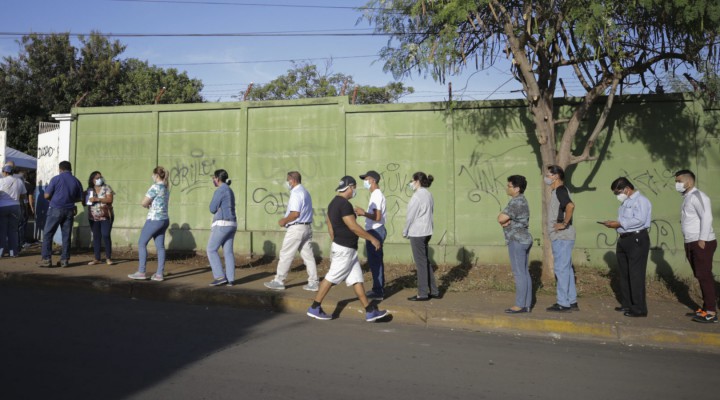 A tacit agreement between the government and Facebook appears to have been made: you can keep the profits, but we control the message. As such, a cynic might wonder what functional difference there is between Facebook and the national security state.

MPN– Less than a week before Nicaragua’s presidential election, social media giant Facebook deleted the accounts of hundreds of the country’s top news outlets, journalists and activists, all of whom supported the ruling left-wing Sandinista government, a top Washington target for regime change.

Facebook claims that these accounts were bots engaged in “inauthentic behavior.” Considering that around half of the country uses the platform for news and entertainment, the decision could barely have been more heavy-handed and intrusive. However, early reports show that if their goal was to swing the result, it has failed badly and the Sandinistas have achieved an overwhelming victory.

“This is appalling interference by Facebook in particular (which is the most popular social media outlet in Nicaragua). They allege that they’ve stopped a government-deployed troll farm but what they have actually done is to close accounts of ordinary Sandinista activists, particularly young people, often with many followers,” John Perry, a journalist living in the city of Masaya, told MintPress.

Worse still, after dozens of Sandinistas took to Twitter to record video messages proving they were real people being censored, their accounts were systematically deleted as well, in what Managua-based journalist Ben Norton described as a Silicon Valley “double-tap strike.”

“These are accounts that average Nicaraguans have come to count on for news and communicating with each other about current events and, in this case, about the election. So it is very troubling that it was obviously targeted against one political group: the Sandinistas,” said Daniel Kovalik, a human-rights lawyer and an observer of this weekend’s elections.

Both Perry and Kovalik were of the opinion that it was no coincidence that Facebook had taken action against precisely the group the U.S. government is trying to overthrow.

Perhaps even more worrying from a freedom-of-speech viewpoint is who made the decision at Facebook. The 11-page report detailing the company’s supposed evidence of inauthentic behavior has just two contributors: Luis Fernando Alonso and Ben Nimmo, individuals with deep and long-lasting ties to Western military intelligence. According to his biography on LinkedIn, Alonso was, until last year, working for Booz Allen Hamilton, a shadowy corporation situated in the area around Washington, D.C. colloquially known as “Raytheon Acres.” The national security state farms out much of its most controversial work to the firm, which is technically a private company (and therefore not subject to the same oversight and scrutiny as public agencies). Edward Snowden, for instance, actually worked for Booz Allen Hamilton, not the NSA. Before that, Alonso directly worked for the government at the William J. Perry Center for Hemispheric Defense Studies, a Department of Defense-controlled institution that trains top military and intelligence leaders.

Nimmo’s background is equally spooky. Between 2011 and 2014, he served as NATO’s press officer, moving the next year to the Institute for Statecraft, a U.K. government-funded propaganda operation aimed at spreading misleading information about enemies of the British state. The Institute for Statecraft established a secret network of journalists across Europe who were used to push anti-Russia and pro-establishment talking points, all in coordination.

In 2019, Nimmo played a key role in downplaying the bombshell news that the Conservative government was quietly negotiating to sell off key parts of Great Britain’s National Health Service (NHS) to foreign plutocrats. When the Labour Party publicized this information just days before the election, Nimmo jumped into action, immediately announcing, without evidence, that the documents in question “closely resemble … a known Russian operation.” His supposedly expert conjecture — together with help from allied journalists in the Integrity Initiative — allowed the story to become “Labour’s links to Russia” rather than “Tories privatizing the NHS in secret,” helping the Conservatives make huge electoral gains.

Facebook — now officially called “Meta” — is extremely secretive about who actually works at their intelligence department. Nowhere can one find a list of names of key figures. However, going back through months of reports and blog posts for names reveals a veritable revolving door between big tech and big government. In short, Facebook is strewn with spies.

For example, a document published in May, entitled “The State of Influence Operations, 2017-2020,” lists five author names in addition to Nimmo’s, at least four of whom have long histories as senior agents in the national security state.

In order, they are:

Of the six authors listed, only one, Margarita Franklin, comes from a non-governmental background.

Looking further into Facebook’s official blog, Mike Dvilyanski is described as the company’s Head of Cyber Espionage Investigations. From 2005 until 2018, Dvilyanski was an FBI agent in Washington and New York City, rising to the rank of Supervisory Special Agent, leading teams investigating cyberwafare.

Another official Facebook report from April was authored by the company’s Technical Threat Investigator, Michael Flossman, who spent nearly six years in the Australian Department of Defense.

In 2018, Facebook announced a partnership with The Atlantic Council, whereby it gave an undisclosed amount of control over users’ news feeds to the group, allowing it to help them decide what posts users saw and which ones were suppressed. Given that the council’s board features a plethora of military generals, former cabinet members, and no fewer than seven former CIA directors, this is tantamount to state censorship on a global level. A tacit agreement between the government and Facebook appears to have been made: you can keep the profits, but we control the message. As such, a cynic might wonder what functional difference there is between Facebook and the national security state.

It might be unfair, however, to single Facebook out. Other large platforms are similarly stocked with government plants. Reddit’s Director of Policy, for instance, was formerly a Deputy Director of The Atlantic Council’s Middle East Task Force. Meanwhile, a senior Twitter executive is also an active duty officer in the British Army’s psychological warfare and online propaganda brigade.

Silicon Valley has not only made their peace with this relationship; they actively court it. “What Lockheed Martin was to the twentieth century, technology and cyber-security companies will be to the twenty-first,” wrote Google executives Eric Schmidt and Larry Cohen in their book, “The New Digital Age,” laying out how they saw Silicon Valley becoming the tip of the American empire’s spear.

Washington has already used social media as a weapon aimed at its enemies. In July, Americans in Miami used Facebook to organize an attempted color revolution in Cuba, while Twitter ignored blatantly obvious bots boosting the anti-government message, even choosing to put it at the top of its “what’s happening” sidebar for 36 hours, meaning every user in the world was alerted to the news. Individuals inside Cuba complained to MintPress that the endless supply of fake news citizens receive from the U.S. via Facebook and WhatsApp is spreading disinformation and rotting Cubans’ brains.

Meanwhile, in 2009, the U.S. government persuaded Twitter to delay scheduled maintenance of its app because of widespread protests it was fomenting in Iran, knowing the platform was being used to coordinate anti-government forces. Last year, Facebook banned all positive references to Iranian general Qassem Soleimani in the wake of his assassination by the Trump administration. “We operate under U.S. sanctions laws, including those related to the U.S. government’s designation of the Iranian Revolutionary Guard Corps and its leadership,” the company said in a statement. Despite the fact that over 80% of the country held positive views towards the general (even before his killing), this meant that even Iranians speaking Farsi with other Iranians online in Iran could not share an overwhelmingly held view. This is but one example of the extraordinary power the U.S. national security state now holds over the means of communication worldwide.

The United States has a long history of interfering in Nicaragua, from invasions to propping up the 40-year Somoza family dictatorship. When Sandinista rebels ran them out of town in 1979, Washington began a long campaign of terror against the Sandinistas, including funding, training and arming the infamous Contra death squads. After more than a decade of interference, U.S.-backed candidate Violeta Chamorro won the 1990 election. However, after Daniel Ortega and the Sandinistas returned to power in 2006, the U.S. once again began trying to undermine their rule through sanctions and by supporting a 2018 coup attempt. Washington has also unleashed an army of NGOs into the country, each attempting to foment discontent with the ruling government.

In September, Secretary of State Anthony Blinken met in New York with the foreign ministers of Mexico and every other Central American country in an attempt to organize a united front against Nicaragua. Last week, the U.S. also announced new sanctions on the country. Kovalik told MintPress:

This is clearly punishment for the fact that they’re going to vote [the wrong way]. And meanwhile, of course the U.S. is putting millions into the country in terms of supporting opposition groups and different propaganda sources. So that continues. Again, what passes for alleged foreign interference in the U.S. …. is nothing compared to what the U.S. is doing here.

Western journalists and election observers whose opinions the U.S. government would rather not be shared have also been targeted. British journalist Steve Sweeney was detained in Mexico en route to Nicaragua. “It is no coincidence that it came just weeks after my ban from the U.S. I fully believe my detention is political and an attack on press freedom,” he wrote, after being released. Meanwhile, Canadian observer Dr. Timothy Bood was barred from sharing his experiences on Facebook, the platform blocking him immediately after he made a comment about U.S. interference in the election.

Perry suggested, however, that if Washington thinks that sanctions sanctions or other new measures will dislodge the government and break the people’s will, they are mistaken, and that the plan could backfire:

We had the approval in the U.S. Congress of the RENACER Act a few days ago, which is another threat of U.S. interference during and after the election process. I think opinion polls show that most people reject U.S. interference very strongly. I think in most cases it will strengthen people’s desire to vote and probably to vote for the Sandinista government. So it could have the opposite effect to the one that the U.S. wants to achieve.

Judging by the jubilant Sandinista parades in Managua and other cities today, coupled with the announcement that Ortega won an estimated three-quarters of the vote on a 65% turnout rate, Perry might have been proved right.

0 thoughts on “The Facebook Team that Tried to Swing Nicaragua’s Election is Full of U.S. Spies”