HOME / Multimedia / Our Broken Media and What To Do About It 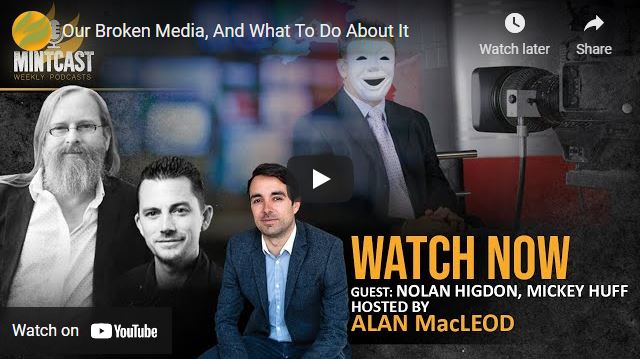 Higdon, Huff and MacLeod talk about censorship, fake news, disinformation and the prevalence of conspiracy theories in this free-flowing discussion.

MPN- Virtually nobody trusts what they read any more. The United States ranks dead last among 46 nations surveyed in confidence in the press. Only 29% of Americans say they broadly believe what they read, see or hear in mainstream media. And more than three quarters of the public think that big outlets knowingly publish fake news.

The term “fake news” first came into common usage around the contentious 2016 election, where both the Trump and Clinton campaigns attempted to weaponize the term against their opponents. Clinton claimed that Trump was being buoyed by false information put out by Eastern European bloggers and shared on sites like Facebook, while Trump shot back at her, claiming the likes of Clinton-supporting networks CNN and MSNBC were themselves fake news.

But joining MintPress Senior Staff Writer Alan MacLeod today are two guests who know that fake news and false information have a long history in America. Dr. Nolan Higdon is an author and university lecturer of history and media studies at California State University East Bay. Meanwhile, Mickey Huff is professor of social science, history and journalism at Diablo Valley College in California and the director of the critical media literacy organization Project Censored.

Together, the pair have written two books: “United States of Distraction: Media Manipulation in Post-Truth America (And What We Can Do About It)” and a forthcoming work, “Let’s Agree to Disagree: A Critical Thinking Guide to Communication, Conflict Management, and Critical Media Literacy.” Both are experts in critical media literacy, journalism, and the history of propaganda.

The power and divisiveness of social media have again been in the news recently, with former Facebook product manager Frances Haugen having claimed that the social media giant — used by 2.9 billion people worldwide for news and entertainment — had consciously promoted divisive and inflammatory content to its users in the belief that it would generate more interest and revenue for the company, despite the dire consequences it has on society.

While many in the 1990s and early 2000s predicted that the internet would bring people closer together and usher in a golden era of free information and communication, in the cold light of day it appears to have done exactly the opposite: pushing people into artificial bubbles insulated from those with differing opinions, helping to lead to a situation where Americans are more polarized than ever and barely able to share a dinner table with their extended family.

Huff and Higdon agreed that fake news and disinformation are a major problem, but that the most pernicious examples of it do not come from Macedonian bloggers or from the gutter press, but from the biggest and most established news outlets, many of whom were integral in selling America’s wars in the Middle East and North Africa to the public.

What is needed is a form of critical media literacy training, helping people understand the biases and agendas of powerful actors; simply censoring false stories will likely not work. This is because it only treats the symptom and not the larger problem. Furthermore, it further empowers many of the largest and most influential companies in the world to be judge, jury and executioner on what is true and what is untrue.

Higdon, Huff and MacLeod talk about censorship, fake news, disinformation and the prevalence of conspiracy theories in this free-flowing discussion.

It Takes A Lot Of Education To Keep Us This Stupid