HOME / WORLD / This Would Be A Wise Stopping Point For This War: Notes From The Edge Of The Narrative Matrix 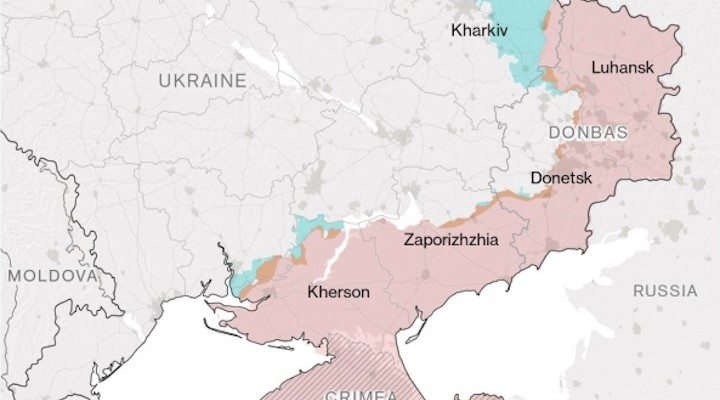 At the risk of upsetting the entire internet, the annexation of those four Ukrainian territories seems like a great time to end this war to me. Does anyone honestly believe a significant percentage of the people who live there want a massive counteroffensive on their doorstep? I don’t.

The west knowingly provoked this war, the thing experts warned for years would happen did happen, and now Ukraine lost some territory. Rather than risking millions or billions of lives escalating this conflict, it seems sensible to draw a line under it. You can yell “Putin bad!” and “International law!” all you want, but it’s just a cold hard fact that after the annexation the US/NATO/Ukraine tandem is going to be presented with the choice of either ending the bloodshed or massively, massively escalating it. Pretty easy choice, in my opinion.

Only a freedom-hating Putin propagandist would oppose spending millions of lives and trillions of dollars in a horrifically brutal and extremely dangerous counteroffensive to reclaim territories full of people who don't want to be reclaimed. https://t.co/3jAIj1fR13

There are two kinds of people who want peace in Ukraine: those who want it to come now via diplomacy, negotiation and compromise, and those who want it to come years from now after pouring millions of lives into driving Russia out of every last inch of Ukraine’s pre-2014 borders. You either support a negotiated settlement right now or you support an extremely long, protracted proxy war that risks nuclear annihilation, ends up costing millions of lives and trillions of dollars, and has no guarantee of success. And the latter position is what’s being planned for:

In a sign that the U.S. and its allies believe that the fighting in Ukraine will last years, military officials from more than 40 countries gathered at NATO’s headquarters on Wednesday to discuss how they can ramp up production of arms and ammunition. https://t.co/pfFlog37B0

Of course I don’t actually believe the fighting will end in this way at this time; there’s too much riding on keeping the bloodshed going. I’m just highlighting the fairly obvious fact that it could end now, and should end now.

So far the strongest arguments I’ve seen that Russia destroyed its own pipelines essentially boil down to “Putin is CRAAAZY! Who knows why that wacky guy does what he does? He’s bonkers!”

“Of COURSE Russia would destroy its own energy infrastructure and hundreds of millions of dollars in natural gas against its own interests and in direct facilitation of longstanding US unipolarist agendas! He’s nuts! He’s CWAAAZY!” Science should really start taking a closer look at this unspecified mental illness which only affects geopolitical foes of the US empire.

If we really believe Putin is so crazy and irrational that he’s begun exploding Russian pipelines and shelling Russia-controlled power plants, the strategy should logically be to simply stand back and let him bomb Russia back to the Stone Age.

Bernie's foreign policy advisor makes the inevitable transition to a think tank funded by Boeing, Northrop Grumman, and all the absolute worst western plutocrats. The metamorphosis is complete. https://t.co/X02r1KQRkg

A think tank is an institution wherein academics are paid by the worst people in the world to convince everyone that good things are bad and bad things are good.

To want a healthy world is to want what the ego sees as a boring world: peace, collaboration and harmony instead of conflict, competition and drama. The fact that egos can’t be content without conflict and drama means humanity must transcend egoic consciousness to become healthy.

Our movies, shows and stories all revolve around conflict and drama because most of humanity is enslaved by egoic consciousness, and conflict and drama are what egos find appealing. We’re going to have to change that about ourselves to be able to live in a healthy world.

If we remain in the same egoic patterning it wouldn’t matter if someone used a genie wish to make the world harmonious and egalitarian today, because we’d just ruin it immediately and return to our old modes of dysfunction. A healthy world can’t exist without a conscious humanity.

And of course a healthy world would not be boring. Peel away the egoic filters on human perception and all of life is clearly seen as thunderously beautiful and endlessly fascinating. The inability to be content with life as it is is just dysfunction born of egoic consciousness.

The universe is becoming more and more perceptive. More and more sentient. More and more capable of knowing itself, to greater and greater degrees of depth, breadth, and complexity. It’s like a baby slowly developing self-awareness.

Did you know evening primrose flowers can “hear” bees approaching, and quickly make their nectar sweeter in order to attract them? Perception is happening all around us in the most unexpected ways, in places we’d never even think to look. Life is amazing. The universe is amazing.

The dawn of life allowed the stardust to behold itself for the first time. And as life becomes more and more advanced, the stardust gets better and better at beholding.

0 thoughts on “This Would Be A Wise Stopping Point For This War: Notes From The Edge Of The Narrative Matrix”