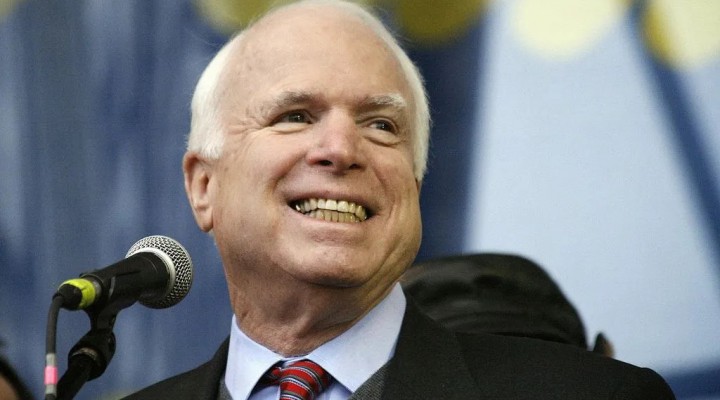 People on Twitter are currently raging because the account for the Libertarian Party of New Hampshire tweeted a post celebrating the anniversary of the death of John McCain, which is a good opportunity to explain why everyone who dances on McCain’s grave is right and why anyone who admonishes them for doing so is wrong.

The reason it’s good and important to celebrate the deaths of war sluts who facilitated mass military slaughter is because it helps bring clarity and proportionality to the horrors of war. You’re making it clear that John McCain’s victims matter more than his daughter’s feelings.

The fact that celebrating the death of war criminals is met with outrage is itself evidence that it’s something that needs to be done. If the public is so blind to the horrors of war that politeness is seen as a higher priority, those horrors need consciousness brought to them.

If mainstream westerners really understood what war is and what it means, it would never occur to anyone that it’s indecent to celebrate John McCain’s death.

The most important thing for the English-speaking world to understand about China is that it’s none of your fucking business. If you live in the US or one of its imperial member states like Australia or the UK, you should be focused on attacking the criminality of the empire. All this neck-craning and pointing at China’s Covid policies or whatever from people who live inside the US-centralized power structure is like someone making a big deal about hearing his neighbor raise her voice to her children while he himself is busy murdering his own family with an axe.

The belief that western noses belong in Chinese affairs is the product of propaganda. Let China do China. We live under the most powerful empire that has ever existed, which is led by the most tyrannical regime on earth. That is where our focus belongs.

I’m becoming more and more disdainful of people who live directly under the thumb of the US empire and yet spend their time criticizing nations like Russia and China. It’s literally the most pathetic, snivelling, power-serving position anyone can possibly take at this point in history.

Fuck anyone who compares China's behavior on the world stage to western imperialism and colonialism. https://t.co/noqWrqMG0s

“You never talk about the good things America gives the world!”

Keep supporting US foreign policy, American progressives. They’ll definitely give you healthcare any minute now if you just hate Russia and China a little harder.

Everything that passes for “the left” in the English-speaking world is either controlled opposition, a glorified online hobby group, or both. That’s not all our fault; the empire poured vast amounts of wealth and effort into making that happen. But we need to be real about it.

Democrats rehabilitated George W Bush out of political necessity. If you don’t turn him into a cuddly wuddly old painter who hates the far right and frolics with Ellen DeGeneres, you can’t support Democrats like Joe Biden who backed all of Bush’s most evil actions to the hilt.

The US empire continually behaves in the same way from year to year regardless of who's president, just rotating out the actors who play the role like James Bond or Dr Who. https://t.co/2INjZZ71Kf

The UK could have had Jeremy Corbyn. Instead they’re getting empty refrigerators and frozen homes.

Until a few years ago, “Russian propaganda” meant media created by the Russian government to facilitate the information interests of the Kremlin. Now it just means any media that criticizes the foreign policy of the most powerful empire that has ever existed.

People sometimes tell me I’m a “grifter” who only says what I say for money. Yes, yes everyone knows this is where the real money’s at: promoting an extremely marginalized perspective online while being called a Kremlin/CCP agent all day. Nobody has ever gotten rich promoting mainstream perspectives.

You learn very early on doing political commentary that the easiest way to go viral is to say something that agrees with broadly supported sentiments in one of the two mainstream political factions. Most people succumb to the temptation to do this. The rest get called “grifters”.

0 thoughts on “Celebrating John McCain’s Death Is Good, Actually: Notes From The Edge Of The Narrative Matrix”