HOME / WORLD / Idiots Are Just Discovering That This War Is Dangerous: Notes From The Edge Of The Narrative Matrix 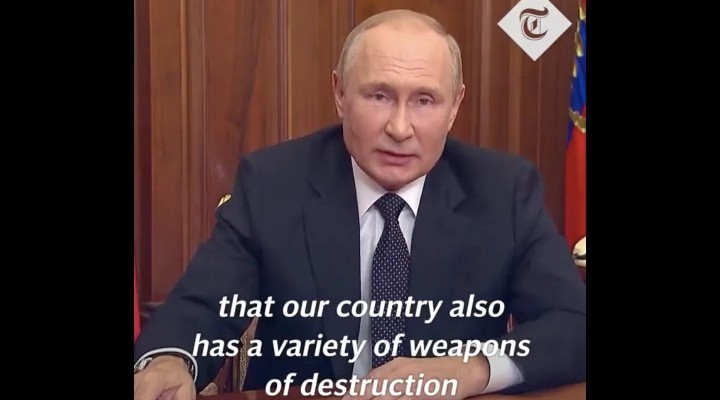 Everyone who acts like it’s a new and unprecedented horror whenever Putin reminds the west that Mutually Assured Destruction still stands is just admitting that they never understood what’s at stake in this proxy war and always thought this was some kind of fucking game.

It’s so crazy how people pretend the US wouldn’t use nukes in response to the exact same type of attacks that Putin is warning against. Like we all know this isn’t some weird new threat that Vladimir Putin invented, right? Do we understand that this is the very reason antiwar activists have spent years warning against this exact confrontation and calling for detente instead?

This shouldn’t scan as something new for you. If Putin reiterating the longstanding principle of Mutually Assured Destruction makes you freak out like something new is being said, it’s because you didn’t pay attention in history class. If you were previously unaware that the threat of nuclear annihilation was baked into this proxy war from the very beginning, that just means it’s time to reassess your support for this proxy war.

Yes this situation is insanely dangerous. No that’s not because of anything Putin has been saying.

They said NATO expansion wouldn't be escalatory. It was.

They said giving Ukraine long-range weapons wouldn't be escalatory. It was.

Now they promise Putin is bluffing. Do you trust them? pic.twitter.com/GITpU5FQnJ

This was always going to be the result of the US policy of shipping billions of dollars worth of weapons into Ukraine and discouraging peace talks at every turn. I hope they’re happy. https://t.co/zDNn8PTVm5

If you’re wondering why we’re seeing more war propaganda today than at any point since World War Two, a big part of it is because it’s going to take a tremendous amount of psychological manipulation to get people to accept the financial hardship that must inevitably befall them as part of the empire’s economic warfare against Russia. Only by ungodly amounts of propaganda would people consent to having their bank accounts emptied for a US proxy war that benefits them in no way and which places them at greater and greater risk of nuclear annihilation.

A truly free and liberal society would not use propaganda, censorship and information ops to manipulate the way the public thinks about a war, but if you criticize the way the western empire is using those exact measures you get a bunch of “liberals” defending their use.

Anyone who still doubts that US government agencies are aggressively disrupting online discourse has packing foam for brains. https://t.co/i3voyySJJG

Facebook contacted the Pentagon when they busted its trolls using bogus accounts, not to tell them to stop, but to help them up their game. pic.twitter.com/ECrTkVmlkH

Pretty wild how the US State Department stopped publishing its annual transparency reports about US government arms trafficking right when the US government began pouring billions of dollars into proxy warfare campaigns.

Watch all the western right wingers who’ve been stomping on women’s rights at home transform into a bunch of bra-burning feminists over women’s rights in Iran.

The fact that the US routinely seizes other nations' territory by force doesn't legitimize Russia's doing so. But it does mean that the US is the very last government on earth who has any business voicing such a grievance, and it does mean the US should shut the fuck up. https://t.co/wH3G0tszaX

One of the craziest things happening in the world today is the way weapons manufacturers are allowed to pour money into corrupt think tanks who go on to directly influence the foreign policy and military budget decisions of the most powerful war machine that has ever existed.

War profiteers being allowed to successfully and very effectively lobby for more war is not morally different from slaughtering human beings at industrial scale and selling their organs; the only difference is the way the money gets made. If you kill people and sell their bodies you’ll be called a monster, but if you kill the same number of people for the same amount of money via weapons industry profits in weapons industry-lobbied wars, you’ll be called an industrious job creator.

This is allowed to continue because the US empire is fuelled by human blood. It’s a symbiotic relationship; neither the arms industry nor the empire can live without war, so any amount of corrupt lobbying for murder and destruction is not just tolerated but warmly welcomed.

It turns out it’s impossible to get the world to unite under a single power structure without violence and the threat thereof. So it’s only natural that an empire where there’s no clear separation of corporation and state would see war profiteers knit themselves into state power.

The entire US empire would collapse if American teenagers weren't economically pressured to sign up to kill impoverished foreigners for Raytheon shareholders. https://t.co/0Q8yBPOcwD

The Ukrainian government and a former NATO Secretary-General have drafted a proposal for a "multi-decade" commitment to NATO proxy warfare in Ukraine.https://t.co/YSXs6NUrNF pic.twitter.com/AtlsRzQkA9

Humanity taking another step toward world war between nuclear superpowers is as good a time as any to reassess our priorities in life. What we think about, what we talk about, what we speak out about, where our attention gravitates, where we place our political energy, how we spend our time on this earth, and with whom.

Anyone who is interested in a sincere relationship with reality must take seriously the possibility that this could all be gone soon, and use that as a guidepost for how they spend their time and energy on this planet.

2 thoughts on “Idiots Are Just Discovering That This War Is Dangerous: Notes From The Edge Of The Narrative Matrix”