HOME / WORLD / Having a Queen Was Stupid; Having A King Is TOO Stupid — Notes From The Edge Of The Narrative Matrix 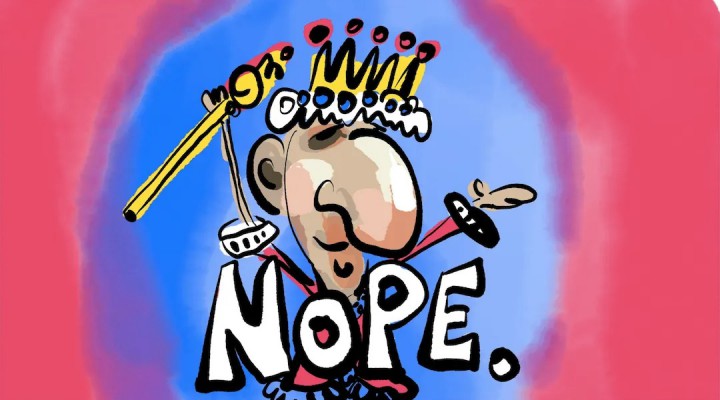 I can’t stop laughing at the fact that we have a King now. “Hello I am the actual, literal King. Please bow to me and put a crown on my head.”

It gets funnier and funnier the more you think about it. Having a queen was really stupid; having a king is too stupid. People aren’t going to buy it, I don’t care how good your PR is.

Just stop having a royal family; it’s so dorky. This isn’t Lord of the Rings. They’re like fantasy LARPers running around with swords and scepters and crowns and junk, except fantasy LARP props aren’t normally encrusted with priceless jewels stolen from colonized territories.

For Americans who are having a hard time understanding what their friends across the pond are going through, imagine if Chicken McNuggets died.

Or anything else you’ve had since you were a child that you know isn’t good for you but it gives you a sense of comfort that you don’t really understand and can’t really control so you’re not ready to give it up just yet.

British media are even more servile and sycophantic than American or Australian media, which is truly an impressive feat:

It’s so crazy how many people I’m seeing getting outraged at criticisms of the queen. Imagine being such a bootlicking cuck that you spend your time running around the internet yelling at people who say disparaging things about a dead imperialist asshole.

Step 1: Set up systems that make the world’s populations dependent on global trade.

Step 2: Work toward shoring up control over those systems so that you decide who gets to trade and who doesn’t.

The US empire continually works to strengthen its stranglehold over global economic and financial systems so that it can starve disobedient populations anywhere in the world without firing a shot. Once you get this, you get why the empire sees a multipolar world as such a threat.

If the US empire doesn’t have wildly disproportionate influence over whether earth’s populations can make and use money, those populations suddenly have no need to obey the dictates of Washington. Unilateral sanctions are meaningless if everyone can just ignore them. So there’s literally an entire planet’s worth of power at stake here when we’re talking about the empire’s “great power competition” with Beijing and Moscow, because what that slogan really means is preventing the rise of a true multipolar world where power isn’t as centralized.

And this is the single most urgent threat facing the human species today: a nuclear-armed empire struggling to secure planetary domination at any cost. A floundering unipolarist empire with nuclear weapons is dangerous in the same way a cornered animal with sharp fangsis dangerous. Except there’s a whole lot more at stake.

US government: Sorry did you say send billions of dollars worth of weapons to Ukraine and Taiwan?

US government: Alright, you drive a hard bargain but here’s billions of dollars of weapons for Ukraine and Taiwan.

I feel like we don’t talk enough about the fact that a 2019 study commissioned by the US Army found that the US could advance its geostrategic interests in Eurasia by baiting Russia into overextending itself in conflicts with US proxies in Ukraine and elsewhere.

Our rulers are drawing us ever closer to nuclear war while our ecosystem hurtles toward collapse and the imperial narrative managers have everyone arguing about whether the world’s biggest problem is Donald Trump or drag queens.

I’ve been having people online tell me with absolute certainty that Russia is right on the verge of retreat from Ukraine any minute now. The longer I do this, the more I see echo chambers as the uncrowned kings of online information. Getting info over those echo chamber walls is the real work.

If you’re really interested in getting dissident ideas and information circulating, the more creative ways you can come up with to get them over your echo chamber walls and into the populations that don’t normally hear them the better. Otherwise we’re just preaching to the choir.

The Queen and Her Legacy: 21st Century Britain Has Never Looked So Medieval

0 thoughts on “Having a Queen Was Stupid; Having A King Is TOO Stupid — Notes From The Edge Of The Narrative Matrix”