HOME / SOCIAL/CULTURAL / Ukraine In The Membrane: Notes From The Edge Of The Narrative Matrix 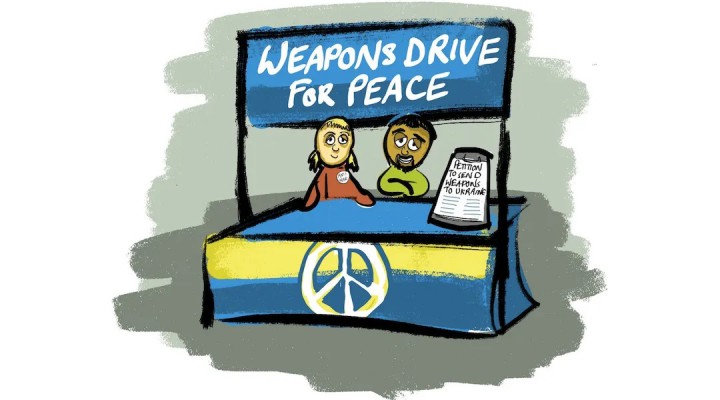 Make no mistake, the US is being entirely pragmatic in its Ukraine proxy war. It gets to shore up control over its European vassals, preoccupy Russia and bleed its coffers, expand its military, advance its information interests, and all it costs is a little pretend empire money.

So of course the empire provoked this war and sabotaged peace at every opportunity. Of course it did. Why wouldn’t it? It stood everything to gain and very little to lose. I mean, unless you count greatly increasing the possibility of nuclear annihilation.

Empire apologists constantly comparing mounting tensions with Russia and China to the beginning of World War Two wouldn’t be as much of a problem if our entire civilization hadn’t been propagandized for generations into believing World War Two was awesome and good. Our deliberately reinforced cultural fascination with that war now has everyone saying “That bad government is Hitler and we’re the good guys who are fighting Hitler and we need to go fight Hitler as soon as possible!”

World War Two was the single worst thing that has ever happened. Period. It is only because of mountains of propaganda that comparisons to the lead-up to WWII don’t have everyone saying “Okay well let’s ramp up diplomacy, de-escalation and detente to make sure that never happens again.”

Imagine being such a pathetic limp-dicked cuck that of all the problems in the world you choose to spend your time shrieking about “communism” and “wokeness”.

Western rightists are freaking out more and more about communism. We’re no closer to communism than we were 30 years ago, their thought shapers just changed the definition of “communism” to mean having a government and sometimes seeing a Pride flag.

Modern mainstream feminism is just one big celebration of the idea that women can murder, predate, oppress and exploit for power and profit just as well as any man. https://t.co/bzi7aFS4wD

A lot of the “anti-wokeness” thing seems to come from people knowing they’re being manipulated by the powerful but having no lucidity on the matter, so they end up going after the wrong targets. It’s not all hateful bigotry; a lot of it is just confusion about where the enemy is. People have an intuitive sense for when they’re being manipulated, but figuring out exactly how mass-scale manipulation is manufacturing consent for the empire takes a lot of learning, and none of it is information they give you in school or teach you in the mainstream news.

Liberals who exploit social justice in a cynical and transparently phony way are largely responsible for this dynamic. People can smell phoniness, and they’re smearing that smell all over real social justice issues.

This is not to say that this dynamic I’m pointing to is the sole driver of all “anti-woke” sentiment; a lot of it is just garden variety prejudice and hate. Civilizations built on genocide, oppression and othering will necessarily have a lot of that lingering around, both conscious and unconscious. But there’s also this other dynamic of confusion which can be addressed.

Whatever your motives, spending your time fretting about “wokeness” is counter-productive. At best you’re just making the world less pleasant for marginalized populations while taking your crosshairs off of real power structures as humanity hurtles toward extinction on multiple fronts, and at worst you’re also fueling the very thing you’re trying to get rid of by providing evidence that there are all these hateful bigots who need to be forcefully opposed.

Living in a liberal western democracy means you have the freedom to criticize your own government for its tyranny, and the press has the freedom to hammer you with propaganda to ensure that you never do.

“I’m so glad I don’t live in a country like Russia or China where people are forbidden to criticize their government. I live in the west, where I’m free to criticize Russia and China all I want.”

We need to get a handle on this climate thing so we can leave a healthy world for our children, our children’s children, and Leonardo DiCaprio’s ex-girlfriends.

Anyone else getting deja vu? https://t.co/SdyDXE9Ep0

Trying to make sense of life using thought is like trying to solve an algebra equation using a hammer. It’s the wrong tool. Eastern philosophy discovered this thousands of years ago and set about creating and distributing the proper tools while the west kept hammering away at the textbook.

The word courage tends to evoke images of heroes and daring rescues, but in real life courageous people mostly use that attribute for confronting uncomfortable truths within themselves.

0 thoughts on “Ukraine In The Membrane: Notes From The Edge Of The Narrative Matrix”