HOME / WORLD / The Fistbump Heard Round The World 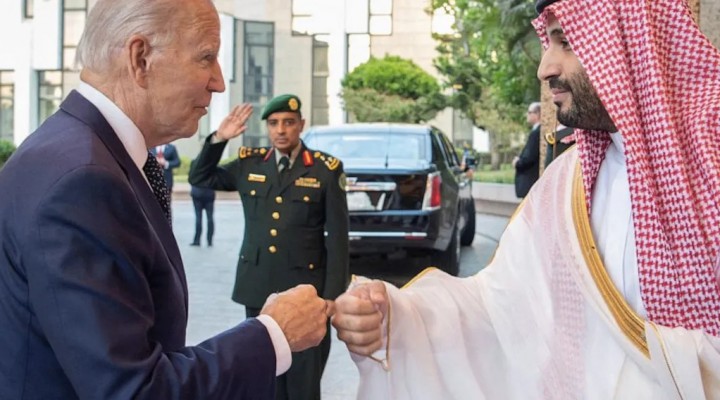 Listen to a reading of “The Fistbump Heard Round The World”:

Two powerful leaders met beneath the hot Jeddah sun to discuss oil and killing and friendship.

One of the leaders rules a tyrannical regime which funds terrorists, murders journalists, suppresses civil rights and commits war crimes. The other, the Crown Prince of Saudi Arabia, is no better.

They greeted not with the traditional handshake, nor with a stern finger wag from the American for the assassination of Jamal Khashoggi, but with the most epic fistbump in the history of civilization.

Since the invention of the fistbump there have been none so pure, so affectionate, so expressive of perfect union and harmony. Observers said they thought they heard angels singing.

Where their two fists connected, their souls merged. Their eyes locked with an intimacy poets and lovers have spent their whole lives trying to capture. Their dick chakras burned with the intensity of a thousand stars.

“This is who we are,” the fistbump roared to the heavens. “This is who we have always been. Our sacred bond presides over an empire that is fueled by oil and blood, and we rule as one in holy communion with the great kings of old. Nothing shall ever come between us: not bone saw nor mass beheading nor strained lip service to human rights values on the presidential campaign trail.”

Time froze as the two joined fists in genocidal matrimony, flashing coy grins at each other upon a mountain of Yemeni corpses and the tortured bones of Syria. Their faces turned to skulls. Doves with red-stained feathers filled the sky.

And the Marxists of the world say “If only we could one day capture that kind of class solidarity.”

And the wives of the world say “If only he would one day look at me like that.”

And the arms manufacturers of the world say “Hoo hoo yeah buddy boy this is gonna be great let’s go snort coke off a Tomahawk missile.”

And the hidden saints say “Something’s gotta give here.”

And the world rotates on the axis of those two joined fists into ecocide and atrocity and Google Hollywood McDystopia.

And the imperial juggernaut marches on, and the Earth spins off into the blackness, and we all hold hands and look to providence as we plunge into an increasingly strange Unknown.

0 thoughts on “The Fistbump Heard Round The World”