HOME / WORLD / Opposing Armageddon To Trigger The Libs: Notes From The Edge Of The Narrative Matrix 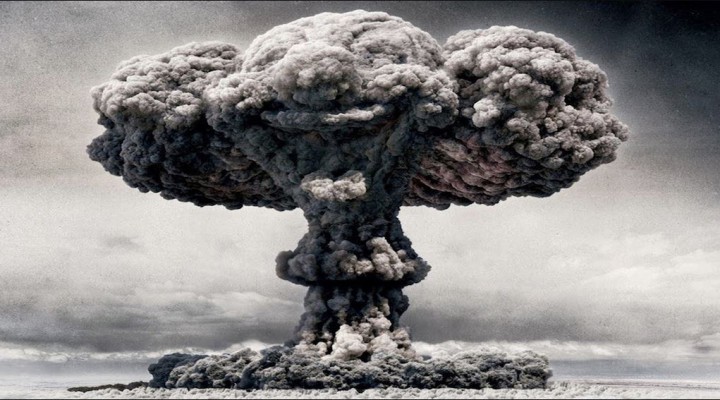 Everyone has lost their fucking mind. Propaganda has made madness look like sanity and sanity look like madness, has normalized cheerleading for nuclear world war and abnormalized calls for de-escalation and detente. It’s truly as bat shit insane as anything could possibly be.

Over and over again we’re being fed the message from the US and its proxies that this game of nuclear chicken can only escalate and never de-escalate. They are lying. They are playing games with all our lives in service of a dark god named unipolarism, and we gain nothing from it.

The only positive I can see in this mess is that any further movement toward madness will have to be a move into sanity, because we’ve taken madness as far as we can possibly take it and we’ll necessarily have to circle back round again. You can only turn 180 degrees away from the light before you’re turning back toward it again. You can only run halfway into the woods before you’re running out of it.

“Kids there’ve been some nuclear explosions and everyone on earth is certain to die horribly, but we need to understand that it was very important for our government to help Ukraine recapture the annexed Donetsk, Luhansk, Kherson and Zaporizhzhia territories from the Russians.”

“What are those places, Daddy?”

I started writing because I was worried I wouldn’t leave a healthy world to my kids. I’ve been screaming for years that we’re drawing closer to nuclear war. Now we’re on the brink, and people are saying I’m only protesting because I love Russia and think Putin is great. Assholes.

How fucking brainwashed do you have to be to think the only possible reason someone might object to gratuitous nuclear brinkmanship is because of some weird, arbitrary loyalty to some random foreign government on the other side of the planet? Bunch of mindless fucking automatons.

It just says so much about where we’re headed as a society that the most surefire way to enrage a liberal in 2022 is to say that reckless nuclear brinkmanship is probably a bad idea.

Opposing armageddon to trigger the libs.

Mainstream liberals are so fucking stupid that they think the only possible choices with regard to Russia are either (A) handing Putin the entire world on a silver platter or (B) just continually charging toward direct confrontation as though Russia doesn’t have nukes. They don’t know what detente is. At all. They don’t even know it’s a thing, let alone an option here. Like if you ask them they don’t know about the existence of the word or the concept. I’ve been complaining about this since long before the invasion.

Detente used to be a household word. Mainstream politicians campaigned on and debated about it. Now hardly anyone knows it’s even a thing, let alone a real option in dealing with the horrifying escalations between NATO and Russia. This is because the political/media class never tells them.

It’s supposed to be the news media’s job to create an informed populace, but because their real job is propaganda they actually do the opposite. News media never mentioning detente is like a preschool teacher never mentioning sharing or cooperation and just telling kids to fight.

We will know we are living in a healthy society when people like John Bolton are chased out of every town and driven away wherever they’re seen until they’re forced to live out the rest of their miserable lives alone in a cave eating bats.

John Bolton still trying to start World War III. It's so crazy how there are people whose whole entire job is to try and cause the violent death of as many human beings as possible. pic.twitter.com/9qOcjYpi61

Since 2016 progressive Democrats have been worse than useless on the single most important issue in the world, namely de-escalating tensions between the US and Russia. They’ve been feeding into the Russia hysteria that got us here and backing proxy warfare in Ukraine to the hilt.

All the human livestock bleating “appeasement!” today would have said the same about Kennedy’s acquiescence to Khrushchev’s demands that he remove US Jupiter missiles from Turkey and Italy, had it been public knowledge at the time. But his doing so was why humanity survived the Cuban Missile Crisis.

People ask me, “Why don’t you tell Putin to de-escalate?”

I don’t have an audience with Putin. I have an English-speaking audience predominantly in nations under the US power umbrella. If you need to hear one more westerner impotently yelling at Putin, go switch on the nearest television.

The troll brigades responsible for swarming critics of the US empire always accuse their targets of working for the Kremlin, because if they’re just troll brigading normal people who voice criticisms of the most powerful empire in history it means they’re just bootlicking jerks. Their story about themselves is that their obnoxious behavior is okay because the Kremlin uses trolls and they’re just using trolling to fight those trolls. The fact that we’re actually just people who disagree with the most powerful government on earth means that story is a lie.

Nobody wants to believe they’re pouring all their time and energy into troll-mobbing normal civilians who are simply voicing their opinion about the most powerful people on earth, so the story that we’re all Kremlin operatives is one of supreme egoic importance for them.

Calling something a “Kremlin talking point” is just saying that because Russia criticizes US foreign policy, westerners should not. They’re literally saying you should never, ever criticize the most dangerous impulses of the most powerful and destructive power structure on earth. Which is obviously a profoundly stupid and crazy thing to say.

Accusing the US of sabotaging the Nord Stream pipelines is called a conspiracy theory. Accusing Russia of doing the exact same thing is called The News.

0 thoughts on “Opposing Armageddon To Trigger The Libs: Notes From The Edge Of The Narrative Matrix”