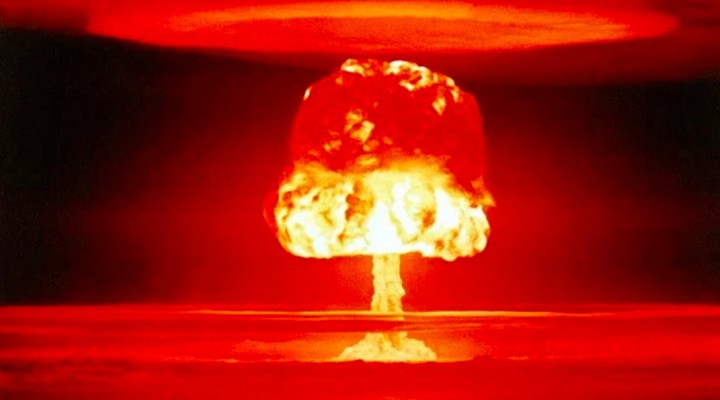 Whenever I say this I always get some liberal saying “Some things are worth dying for” or some shit. Actually, no. Nothing, literally nothing, is worth the obliteration of all life on earth. It’s not worth gambling all terrestrial life to please your dopey egocentric fixations.

People who think nuclear brinkmanship is worth the risk either haven’t thought hard enough about what nuclear war is and what it would mean, or they just hate life and have some sick desire to see the end of everything. Either way they should be dismissed with extreme aggression.

If there’s one thing everyone should be able to come together on, it’s that every measure should be taken to avoid the end of everything. It is only because our civilization is awash with war propaganda that this isn’t glaringly obvious to everybody.

That necessarily means de-escalation and detente. It means compromise. It means change. It means acknowledging what your side did wrong to bring us this close to the edge and taking drastic measures to change that and make sure it never happens again. It’s not egoically pleasing, but it’s necessary. More so than anything has ever been. Risking the annihilation of all terrestrial life is not worth the egoic gratification we get from our narratives about “winning” and “losing” and “good guys” and “bad guys”. This is infinitely more important than that.

Our civilization is so backwards and insane that people will act like you’re the worst person in the world for saying we should try to avoid nuclear armageddon. I and many others have been screaming for years that US policy toward Russia is bringing us closer and closer to nuclear war; now we’re on the brink and the people we were screaming at are acting like we’re the assholes.

Still laughing at how frantically over the top AP went with its "blaming the US for sabotaging Russian pipelines is a baseless conspiracy theory" article. pic.twitter.com/avXgXYM5yP

Two administrations ago the US had a president who mocked the idea that Russia was a primary rival and said Ukraine was a core interest to Russia but not the US, and liberals thought he was awesome. After four years of intelligence agency-driven narratives marrying Russia to Trump, liberals are now braying for World War III.

Before 2016 Democrats saw those who spent energy freaking out about Russia as weird, archaic cold warriors. Now they see anyone who doesn’t want war with Russia as a secret agent of the Kremlin. All because they were trained that Russia = Trump and therefore fighting Russia = fighting Trump.

Real monsters don’t look the way we’re trained to expect. Those who’ll rape and hurt us are usually people we know and trust. The most murderous tyrants don’t look like Hollywood villains; they make jokes and praise freedom and democracy and shake your hand on the campaign trail.

Those who are causing the most death, oppression and misery in our world don’t resemble the Hitler-like monsters we’ve been trained to anticipate. They look friendly. They say things you agree with. Depending on their party, they might even ask you your pronouns. Meanwhile, Marvel supervillains have more depth and complexity than the one-dimensional characters the imperial spin machine concocts to represent its official enemies. Thanos was a more believable character with more understandable and nuanced motivations than the propaganda machine’s fictional representation of Putin.

Predators know that if they stand out and look overtly predatory they’re not likely to land any prey; that’s why polar bears are white. The same is true of human predators. The unskillful ones are overtly predatory. The ones who catch the seal are the ones who hide in the snow.

Real monsters don’t look how we’re trained to expect. Because the real monsters are the ones who’ve been training our expectations.

Phoniest, most PR-intensive proxy war of all time. Are people not tired of having their intelligence insulted? https://t.co/hS9N5jCGF7

The US empire has not gotten any less murderous and tyrannical than it was during the Bush administration, it’s just gotten better at hiding its murderousness and tyranny through narrative management, alternate forms of warfare like starvation sanctions, and outsourcing its military violence to other nations and military forces.

I sometimes get people objecting to my description of the US as the head of an empire, but that’s silly; it’s an empire in all but name. It’s an unofficial, unacknowledged empire that lets most of its member states keep their own flags and set most of their own domestic policies, but they act as a unified whole on foreign policy. If they don’t, their government gets replaced.

You get a good vantage point on this dynamic from Australia, where every time we’ve tried to set foreign policy more in alignment with our own interests there’s been a coup driven by the US. That’s why we’re functionally just a US military and intelligence asset now; just a continent-sized military base with a good location in relation to China as far as the empire is concerned.

Virtually all major international conflicts can be understood through the lens of the US-centralized power structure working to convert more and more nations into imperial member states, and nations resisting this agenda with varying degrees of success. It’s not just an empire, it’s the most powerful empire that has ever existed. Not even the British were able to project this much power and influence around the world. No other power has come nearly as close to unipolar planetary hegemony, which is the US empire’s ultimate goal.

The really transformative insights and epiphanies aren’t the ones about how you should be or what you should change, but the ones which bring consciousness to something inside you that you weren’t aware of before. Those are the revelations that leave you changed for life.

People don’t keep their New Year’s resolutions. This is because we have a lot less free will than we think we do. The closest thing we have to real free will is the ability to bring awareness to the forces within us that drive our behavior, which can then be healed and released.

Addictive behavior doesn’t change when you decide to change it, but when you bring consciousness to the dynamics within yourself which were compelling it.

True selflessness comes not from choosing to be selfless, but from seeing that the self is an illusion.

True presence comes not from choosing to be more present, but from deeply recognizing the newness of each instant that is always already the case.

Inner peace comes not from choosing to be more peaceful, but from realizing that our entire field of consciousness is painted upon an abyss of pure peace.

Happiness comes not from choosing to be happier, but from recognizing the exhaultant joy which already exists in everything.

That which can be obtained can be lost. That which you choose to change will tend to change right back. But a recognition of the gifts we are already swimming in every instant of our lives brings in a health and harmoniousness which stays with us, because they’ve never not been with us.

This is as true for humanity as a collective as it is for an individual. Changes in collective human behavior always arise from the spread of awareness, whether it’s to social injustices or scientific realities. So spreading awareness is what brings real change in the world.

Expanding consciousness is what happens when we closely and honestly observe our inner processes: our belief systems, our habits of thinking and perceiving, how this experience is actually happening and what it’s being perceived by, etc. It’s also what happens when we engage in activism to spread awareness of important issues, when we engage in journalistic activity to spread information, or when we speak out against abusive power structures.

And there are forces which will resist this, both within and without. There are identity constructs within us whose existence depends on not being consciously seen, and they do everything they can to distract us from looking at them. There are forces in the world who do that too. Just as egoic structures try to avoid being seen because their existence depends on it, so too do power structures work to avoid being seen for the same reason. That’s the reason for government secrecy, propaganda, censorship, Silicon Valley algorithm manipulation, and the war on journalism. That’s also the reason psychedelics were made illegal. Obstructing vision is the goal of these forces whose existence depends upon remaining unseen, whether it’s inner or outer vision.

From my point of view that’s what all of life is about: bringing seeing to what’s unseen. The appearance of life on this planet made it possible for the universe to behold itself, and it’s beholding itself with greater and greater depth and complexity as life grows more advanced.

One thought on “Nothing’s More Important Than Avoiding Nuclear War: Notes From The Edge Of The Narrative Matrix”