HOME / WORLD / The Queen and Her Legacy: 21st Century Britain Has Never Looked So Medieval

The Queen and Her Legacy: 21st Century Britain Has Never Looked So Medieval 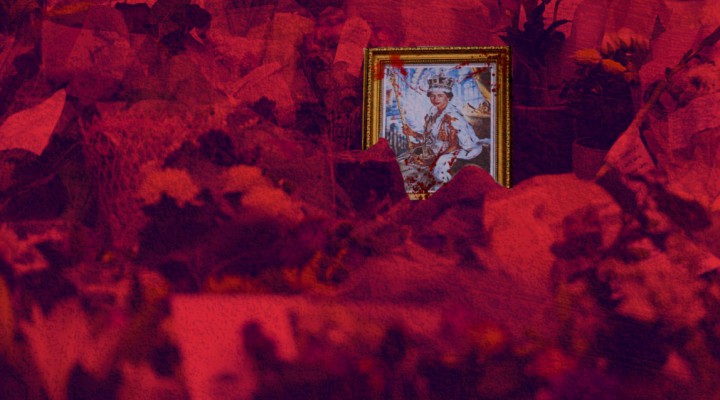 Jonathan Cook- If the Queen’s job was to rebrand the empire as Commonwealth, transmuting the Mau Mau massacre into gold medals for Kenyan long-distance runners, Charles’ job will be to rebrand as a Green Renewal the death march led by transnational corporations.

Anyone in the UK who imagined they lived in a representative democracy – one in which leaders are elected and accountable to the people – will be in for a rude awakening over the next days and weeks.

TV schedules have been swept aside. Presenters must wear black and talk in hushed tones. Front pages are uniformly somber. Britain’s media speak with a single, respectful voice about the Queen and her unimpeachable legacy.

Westminster, meanwhile, has been stripped of left and right. The Conservative, Liberal Democrat and Labour parties have set aside politics to grieve as one. Even the Scottish nationalists – supposedly trying to rid themselves of the yoke of centuries of English rule presided over by the monarch – appear to be in effusive mourning.

The world’s urgent problems – from the war in Europe to a looming climate catastrophe – are no longer of interest or relevance. They can wait till Britons emerge from a more pressing national trauma.

Domestically, the BBC has told those facing a long winter in which they will not be able to afford to heat their homes that their suffering is “insignificant” compared to that of the family of a 96-year-old woman who died peacefully in the lap of luxury. They can wait too.

At least he was corrected somewhat by colleague. pic.twitter.com/hQFv5F3dkl

In this moment there is no public room for ambivalence or indifference, for reticence, for critical thinking – and most certainly not for Republicanism, even if nearly a third of the public, mostly the young, desire the monarchy’s abolition. The British establishment expects every man, woman, and child to do their duty by lowering their head.

There are reasons a critical gaze is needed right now, as the British public is corralled into reverential mourning.

The wall-to-wall eulogies are intended to fill our nostrils with the perfume of nostalgia to cover the stench of a rotting institution, one at the heart of the very establishment doing the eulogising.

The demand is that everyone shows respect for the Queen and her family and that now is not the time for criticism or even analysis.

Indeed, the Royal Family have every right to be left in peace to grieve. But privacy is not what they, or the establishment they belong to, crave.

And in the meantime, the British public will be force-fed the same official messages by every TV channel – not neutrally, impartially or objectively, but as state propaganda – paid for, once again, by the British taxpayer.

Reverence and veneration are the only types of coverage of the Queen and her family that is now allowed.

But there is a deeper sense in which the Royals are public figures – more so even than those thrust into the spotlight by their celebrity or talent for accumulating money.

The British public has entirely footed the bill for the Royals’ lives of privilege and pampered luxury. Like the kings of old, they have given themselves the right to enclose vast tracts of the British Isles as their private dominion. The Queen’s death, for example, means the Duke and Duchess of Cambridge have just added the whole of Cornwall to their estate.

If anyone is public property, it is the British Royals. They have no right to claim an exemption from scrutiny just when scrutiny is most needed – as the anti-democratic privileges of monarchy pass from one set of hands to another.

The demand for silence is not a politically neutral act. It is a demand that we collude in a corrupt system of establishment rule and hierarchical privilege.

The establishment has a vested interest in enforcing silence and obedience until the public’s attention has moved on to other matters. Anyone who complies leaves the terrain open over the coming weeks for the establishment to reinforce and deepen the public’s deference to elite privilege.

Undoubtedly, the Queen carried out her duties supremely well during her 70 years on the throne. As BBC pundits keep telling us, she helped maintain social “stability” and ensured “continuity” of rule.

The start of her reign in 1952 coincided with her government ordering the suppression of the Mau Mau independence uprising in Kenya. Much of the population were put in concentration camps and used as slave labour – if they weren’t murdered by British soldiers.

We take a look back at Queen Elizabeth II's longstanding relationship with Africa. pic.twitter.com/iWJix5nnlp

At the height of her rule, 20 years later, British troops were given a green light to massacre 14 civilians in Northern Ireland on a protest march against Britain’s policy of jailing Catholics without trial. Those shot and killed were fleeing or tending the wounded. The British establishment oversaw cover-up inquiries into what became known as “Bloody Sunday”.

And in the twilight years of her rule, her government rode roughshod over international law, invading Iraq on the pretext of destroying non-existent weapons of mass destruction. During the long years of a joint British and US occupation, it is likely that more than a million Iraqis died and millions more were driven from their homes.

The Queen, of course, was not personally responsible for any of those events – nor the many others that occurred while she maintained a dignified silence.

But she did provide regal cover for those crimes – in life, just as she is now being recruited to do in death.

Thank you to the rest of the world for stopping whatever it was you were doing – warring, starving, dying – so we can focus on grieving for a rich old lady. Obviously her death is more important than your suffering

It was her Royal Armed Forces that killed Johnny Foreigner.

It was her Commonwealth that repackaged the jackbooted British empire as a new, more media-savvy form of colonialism.

It was the Union Jacks, Beefeaters, black cabs, bowler hats – the ludicrous paraphernalia somehow associated with the Royals in the rest of the world’s mind – that the new power across the Atlantic regularly relied on from its sidekick to add a veneer of supposed civility to its ugly imperial designs.

Paradoxically, given US history, the special-ness of the special relationship hinged on having a much-beloved, esteemed Queen providing “continuity” as the British and US governments went about tearing up the rulebook on the laws of war in places like Afghanistan and Iraq.

And therein lies the rub. The Queen is dead. Long live the King!

But King Charles III is not Queen Elizabeth II.

The Queen had the advantage of ascending to the throne in a very different era, when the media avoided Royal scandals unless they were entirely unavoidable, such as when Edward VIII caused a constitutional crisis in 1936 by announcing his plan to marry an American “commoner”.

With the arrival of 24-hour rolling news in the 1980s and the later advent of digital media, the Royals became just another celebrity family like the Kardashians. They were fair game for the paparazzi. Their scandals sold newspapers. Their indiscretions and feuds chimed with the period’s ever more salacious and incendiary soap opera plots on TV.

But none of that dirt stuck to the Queen, even when recently it was revealed – to no consequence – that her officials had secretly and regularly rigged legislation to exempt her from the rules that applied to everyone else, under a principle known as Queen’s Consent. An apartheid system benefiting the Royal Family alone.

By remaining above the fray, she offered “continuity”. Even the recent revelation that her son, Prince Andrew, consorted with young girls alongside the late Jeffrey Epstein, and kept up the friendship even after Epstein was convicted of paedophilia, did nothing to harm the Teflon Monarch.

Charles III, by contrast, is best remembered – at least by the older half of the population – for screwing up his marriage to a fairy-tale princess, Diana, killed in tragic circumstances. In preferring Camilla, Charles traded Cinderella for the evil stepmother, Lady Tremaine.

If the monarch is the narrative glue holding society and empire together, Charles could represent the moment when that project starts to come unstuck.

Which is why the black suits, hushed tones, and air of reverence are needed so desperately right now. The establishment is in frantic holding mode as they prepare to begin the difficult task of reinventing Charles and Camilla in the public imagination. Charles must now do the heavy lifting for the establishment that the Queen managed for so long, even as she grew increasingly frail physically.

Please take this moment to study, really study, the journalists working for the BBC, ITV and Ch4. Do they seem like fearless, independent, objective observers of the world, or more like fawning courtiers? This is the moment when the mask slips. Drink it in deeply…

The outlines of that plan have been visible for a while. Charles will be rechristened the King of the Green New Deal. He will symbolise Britain’s global leadership against the climate crisis.

If the Queen’s job was to rebrand empire as Commonwealth, transmuting the Mau Mau massacre into gold medals for Kenyan long-distance runners, Charles’ job will be to rebrand as a Green Renewal the death march led by transnational corporations.

Which is why now is no time for silence or obedience. Now is precisely the moment – as the mask slips, as the establishment needs time to refortify its claim to deference – to go on the attack.

The Queen and Her Legacy:  21st Century Britain Has Never Looked So Medieval

The Crown’s Crimes in Ireland: Colonization System Exported to the World

No Celebration for a Colonizer: Communists in Kenya on Queen’s Brutal Legacy

One thought on “The Queen and Her Legacy: 21st Century Britain Has Never Looked So Medieval”