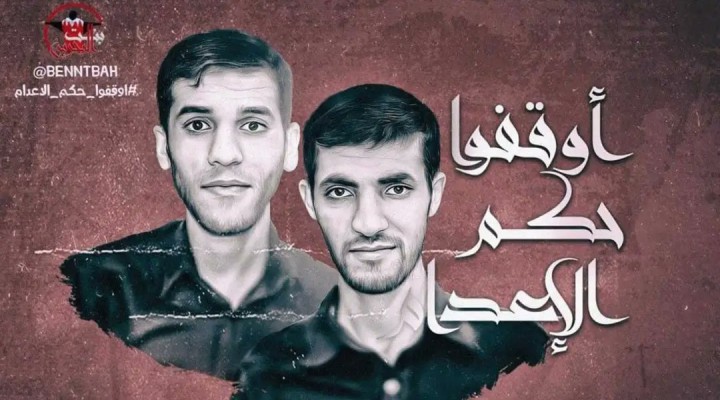 Exclusive- As the Saudi regime fabricates politically-motivated charges against its opponents, two Bahraini nationals, Jaafar Sultan (30) and Sadiq Thamer (33), have been wrongfully accused of “terrorism” and sentenced to death.

Jaafar and Sadiq’s lives are now in the hands of the Saudi King who could ratify their execution at any moment. Various Bahraini opposition and rights groups have warned against implementing the sentence, stressing that the Saudi judicial procedures breach fair trial assurances.

On 8 May 2015, Saudi authorities arrested both Sadeq and Jaafar and seized their car without presenting an arrest warrant. Since their arrest, they have been subjected to a prolonged enforced disappearance, torture, and enforced to sign incriminating confessions.

On 31 May 2016, a Bahrain court sentenced the two men were sentenced to life imprisonment in absentia based on similar charges and stripped them of their citizenship.

On 7 October 2021, a Saudi Specialised Criminal Court sentenced the 2 young men to death, and on 11 January 2022, the sentences were upheld by the Court of Appeal. Then, on 7 April 2022, the Supreme Court ratified the death sentence after they exhausted their legal remedies.

The UN’s special rapporteurs sent, on 26 January 2022, a letter to the Saudi authorities, calling on it to immediately halt the death sentences against both Jaafar Sultan and Sadiq Thamer. The rapporteurs further noted that they “did not have access to a lawyer and could not resort to any remedy to challenge the lawfulness of their detention”, stating that the imposition of the sentence would be an “arbitrary killing”.

In a statement, Amnesty International has called on the Saudi authorities “not to ratify the death sentence, quash their conviction and re-try them in line with international fair trial standards”.

The use of the death penalty in Bahrain has dramatically escalated since 2011 by more than 600 percent. Some 88 % of executed were convicted of “terror” charges, and 100 % were alleged torture. Today, some 26 torture survivors are facing imminent execution on death row, 12 of whom have exhausted all legal remedies, and whose convictions were based on false evidence obtained through torture and ill-treatment” especially targeting those connected to political opposition as several had attended pro-democracy protests, a move that violates international laws.

Rights groups have frequently urged the Bahraini government to implement an immediate moratorium on the death penalty, to pend a full review of all capital cases to identify allegations of torture, to quash all death sentences, and to overturn any convictions that rely on torture evidence.

They have further called on the international community, chiefly the UK to halt all assistance to Bahraini security and justice bodies that are responsible for carrying out much of the alleged abuses before it is too late.

Former Saudi Political Prisoner: U.S. Officials ‘Don’t Give a F*** About These Souls’