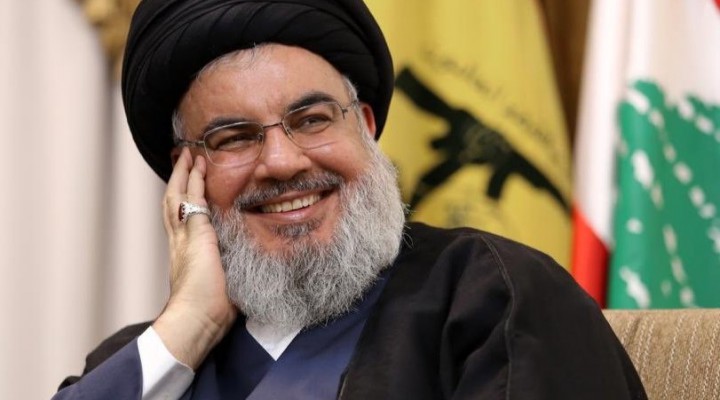 Why did the Hezbollah leader raise the rhetoric against Riyadh?

Hezbollah Secretary-General Hassan Nasrallah launched an unprecedented attack on Saudi King Salman this week in response to his speech calling the party a ‘terrorist’ organization and demanding Lebanese leaders put an end to its ‘domination’ of the Lebanese state.

Nasrallah retorted: ‘It is you who are the terrorists; you who have sent suicide bombers to Iraq, who have waged war on Yemen for seven years, who hold thousands of Lebanese workers hostage in your country, as your country, Saudi Arabia, takes part in the global war on the region.’

Nasrallah’s riposte, in a speech marking the anniversary of the assassination of Iran’s Gen. Qasem Soleimani and his Iraqi comrade Abu-Mahdi Al-Muhandis, must be seen in the context of the high tension in Lebanese-Saudi relations over old remarks by ex- information minister Georges Kordahi criticizing the Saudi war on Yemen.

What apparently angered Nasrallah and many in his party was that the ‘terrorist’ epithet was used not by some Saudi official or media outlet, but by the king himself in a live formal policy address. This was completely at odds with the way Saudi monarchs usually address their adversaries and amounted to direct incitement, according to an expert on Saudi-Lebanese relations.

It is unknown whether Salman himself chose to ascribe the ‘terrorist’ designation to Hezbollah in his speech. He was visibly ailing while delivering a brief excerpt live on TV, and previously had been completely absent (or absented) from two major diplomatic events in Riyadh: the visit of French President Emmanuel Macron, and the Gulf Cooperation Council summit. The speech was most likely drafted by an aide acting on instructions from de facto ruler Crown Prince Mohammed bin Salman, who is intensely hostile to Hezbollah and its leader and bankrolls its Lebanese political and sectarian opponents.

Saudi Arabia has changed. This has extended to many of its previous domestic and foreign policies that were characterised by restraint, forbearance, and avoidance of confrontation — whether military, political or in the media — except in rare cases. Lebanon too has changed at all levels. Hezbollah has become a formidable political and military force whose serial victories, especially the liberation of the south in 2000 and the defeat of the 2006 Israeli aggression, cannot be ignored, and which now possesses a deterrent arsenal of tens of thousands of missiles.

The big problem is that the new Saudi leadership refuses to comprehend this change. It still treats Lebanon as a weak state that can be run and controlled through financial inducements and by relying on the country’s old historic political and sectarian forces. The same mistake was repeated in dealing with Yemen, the dynamics of the conflict in the country, its emergent new power, and the massive regional support it has received during the past seven years of war.

Lebanese Prime Minister Najib Mikati also made that mistake when he condemned Nasrallah’s speech and said it did not serve Lebanon’s interests or reflect its official view. In contrast, President Michel Aoun took a more reasoned stance that upheld Lebanon’s dignity. He issued a statement affirming the country wants good relations with Saudi Arabia and other Gulf states but based on reciprocity and serving the interests of all sides.

Hezbollah is a main component of the Lebanese body-politic and therefore a key partner in government. Mikati should have been more heedful of this. If he didn’t want to take its side and defend it as a Lebanese partner from the Saudi attack on it, at least he shouldn’t have distanced himself completely and taken the Saudi side — especially as his appeasement of Riyadh so far, including pushing Kordahi to resign, has failed to produce any positive results. The Saudis continue to shun him and none of the Gulf ambassadors recalled from Beirut has been sent back. His attitude will only deepen the cabinet crisis and could hasten his own resignation.

Nasrallah is careful in his choice of words and the timing and manner of their delivery. His fulsome attack on the US and then on Saudi Arabia comes as the Vienna nuclear talks approach their moment of reckoning, amid mounting Israeli threats to attack Iran, and with speculation growing about an imminent fifth round of Iranian-Saudi talks in Baghdad or Muscat. This raises many questions about what the future holds on these fronts. Nasrallah is privy to much information, and I would therefore rather await than pre-empt those developments.

0 thoughts on “Nasrallah and Saudi Arabia”