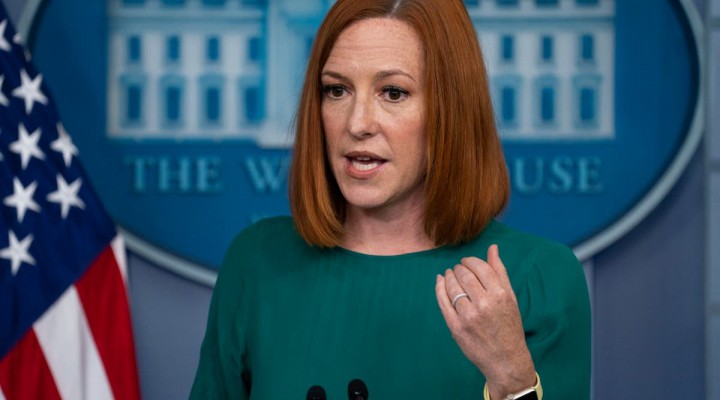 In what’s surely the biggest “Imagine the outrage if Trump had done that” moment to date, the Biden administration has admitted that it is giving Facebook a list of accounts to censor for spreading “disinformation” about the Covid-19 response.

“We’ve increased disinformation research and tracking,” Press Secretary Jen Psaki told the press on Thursday. “Within the Surgeon General’s Office, we’re flagging problematic posts for Facebook that spread disinformation. We’re working with doctors and medical professionals to connect medical experts with people, who are popular with their audiences with accurate information and boost trusted content. So, we’re helping get trusted content out there.”

Psaki told the White House press corps that the administration has a list of accounts who produce most of the anti-vaccine information on Facebook, which civil libertarians are decrying as an obviously authoritarian government overreach.

“The Biden administration is telling Facebook which posts it regards as ‘problematic’ so that Facebook can remove them,” Glenn Greenwald said on Twitter in response to the news. “This is the union of corporate and state power — one of the classic hallmarks of fascism — that the people who spent five years babbling about fascism support.”

“If you don’t find it deeply disturbing that the White House is ‘flagging’ internet content that they deem ‘problematic’ to their Facebook allies for removal, then you are definitionally an authoritarian,” Greenwald said. “No other information is needed about you to know that. There is no circumstance — none — in which it’s acceptable for the White House or any other agency of the government to be providing lists to Facebook of ‘problematic’ content it wants removed, yet that’s exactly what Psaki says they’re doing. The White House is admitting that they’re compiling lists of people who they claim are posting content they regard as ‘problematic’ and that constitute ‘misinformation’ and are demanding Facebook remove them. This is authoritarianism.”

The Biden administration is telling Facebook which posts it regards as "problematic" so that Facebook can remove them.

This is the union of corporate and state power — one of the classic hallmarks of fascism — that the people who spent 5 years babbling about fascism support. https://t.co/U2Ee3DgXJe

The most common argument you’ll hear from those who support monopolistic social media giants controlling speech on their platforms is that these are private corporations, not the government, so it doesn’t count as censorship. Whenever you object to Silicon Valley oligarchs exerting total control over the political speech of billions of people, mainstream liberals instantly transform into an army of Ayn Rands defending the private property rights of those companies. The fact that these platforms are inseparably interwoven with the highest branches of the US federal government kills such arguments stone dead.

And if you were paying attention, that argument was already dead. All of these online platforms use censorship and algorithm manipulation to hide undesirable political speech from the mainstream public in direct collaboration with government and government-tied institutions.

In 2017 Senator Dianne Feinstein threatened social media platforms that alleged Russian interference in the 2016 election means they need to start utilizing more censorship or else face consequences, saying, “You created these platforms, and they are being misused. And you have to be the ones to do something about it—or we will.”

That same year representatives from top internet platforms were brought before congress and told they needed to adopt a “mission statement” expressing their commitment “to prevent the fomenting of discord,” because “Civil wars don’t start with gunshots, they start with words.”

In the lead-up to the 2020 election online platforms were openly coordinating with US government agencies to censor speech believed to compromise election integrity.

Facebook, the largest social media platform in the world where a third of Americans regularly get their news, openly enlists the government-and-plutocrat-funded imperialist narrative management firm The Atlantic Council to help it determine what content to censor and what to boost. Facebook has stated that if its “fact checkers” like The Atlantic Council deem a page or domain guilty of spreading false information, it will “dramatically reduce the distribution of all of their Page-level or domain-level content on Facebook.”

Google, which owns YouTube, has been financially intertwined with US intelligence agencies since its very inception when it received research grants from the CIA and NSA. It pours massive amounts of money into federal lobbying and DC think tanks, has a cozy relationship with the NSA, and has been a military-intelligence contractor from the beginning.

Americans deserve to know to what extent the federal government works with social media companies. Is there any quid pro quo? The First Amendment exists to keep the government from controlling what Americans hear. Free societies counter misinformation with information, not bans.

“Americans deserve to know to what extent the federal government works with social media companies,” former congressman Justin Amash said on Twitter in response to Psaki’s incendiary admission. “Is there any quid pro quo? The First Amendment exists to keep the government from controlling what Americans hear. Free societies counter misinformation with information, not bans.”

“Democrats have summoned tech executives to the Congress at least four times in the last year,” Greenwald replied to Amash. “The last time, they repeatedly and explicitly threatened regulatory and other legal punishment if they don’t start censoring more: the content Dems regard as disinformation or ‘hate speech.'”

In a corporatist system of government, where there is no separation between corporate power and state power, corporate censorship is state censorship. The actual government as it actually exists is censoring the speech not just of its own people, but people around the world. If US law had placed as much emphasis on the separation of corporation and state as it had on the separation of church and state, the country would be unrecognizably different from what we see today.

Only infantile narcissists and power-worshipping bootlickers want the most powerful government on earth controlling what people are allowed to say to each other about a virus response which affects everybody, and only those with no sense of self-preservation entrust worldwide human speech to an alliance of government agencies and powerful tech plutocrats.

We cannot keep heading in this direction.