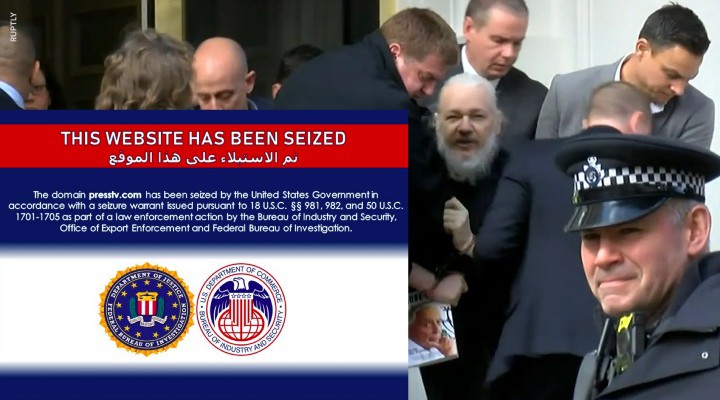 The US government has shut down multiple news media websites based in the Middle East, including Iran’s state-owned Press TV, and al-Masirah TV which is owned by the Houthi group Ansarullah in Yemen. The Department of Justice said on Tuesday it had seized 36 Iranian-linked websites, claiming without evidence that they were associated with “either disinformation activities or violent organizations” and were shut down for a violation of US sanctions.

This would also be the same US government which constantly pays lip service to the need to protect the freedom of the press, as part of the “rules-based international order” it purports to uphold in the world.

He tweeted this the month before the US government shut down dozens of Middle East-based news media websites and weeks before US-sponsored military explosives were used to destroy over 20 Palestinian media outlets in Gaza, all while Julian Assange wastes away in Belmarsh Prison. https://t.co/iZw7BxxhoV

The Biden administration has been bleating “rules-based order” so frequently and with such obvious meaninglessness that even The New York Times voiced some criticism of the way that vapid, idiotic phrase is being used instead of the well-defined term “international law”. As Medea Benjamin and Nicolas JS Davies wrote for Salon last month:

For Blinken, the concept of a “rules-based order” seems to serve mainly as a cudgel with which to attack China and Russia. At a May 7 UN Security Council meeting, Russian Foreign Minister Sergey Lavrov suggested that instead of accepting the already existing rules of international law, the United States and its allies are trying to come up with “other rules developed in closed, non-inclusive formats, and then imposed on everyone else.”

Today, far from being a leader of the international rules-based system, the United States is an outlier. It has failed to sign or ratify about 50 important and widely accepted multilateral treaties on everything from children’s rights to arms control. Its unilateral sanctions against Cuba, Iran, Venezuela and other countries are themselves violations of international law, and the new Biden administration has shamefully failed to lift these illegal sanctions, ignoring UN Secretary-General António Guterres’ request to suspend such unilateral coercive measures during the pandemic.

What the phrase “rules-based order” actually means is Washington-based order. It means a world order imposed by the US government and its lackey states on pain of devastation and death, which exists solely to keep the US at the head of a unipolar empire. It means do as I say, not as I do. It means rules for thee but not for me. It means we decide what happens based on what suits our interests.

If you peel away all the narrative spin and outward politeness, the US empire just looks like any other tyrannical force that has ever existed throughout human history, except it kills a lot more people than most of the others. In the old days the thugs with the most effective killing force would dominate everyone else using terror, wearing frightening battle costumes adorned with the body parts of their enemies. Nowadays they still dominate everyone else using terror, except they do it while wearing suits, and while waxing self-righteously about the “rules-based international order”. And they are much better at killing.

There is no other government on earth that is less qualified to impose any “order” upon the world. This is the only government on earth which has killed millions of people and displaced tens of millions just since the turn of this century, the only government on earth that is circling the planet with hundreds of military bases and working to destroy any nation which disobeys its dictates. Yemen alone completely delegitimizes any claim the US may have had to be the arbiter of “order” in the world, to say nothing of Iraq, Vietnam, Libya and all the other innumerable atrocities that this monstrous regime has inflicted upon our species.

The sooner humanity can extract the parasite that is the US empire from its skin, the better off the whole world will be.