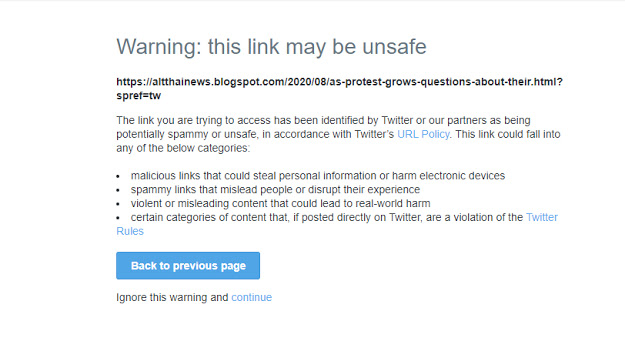 After exposing US funding behind Thailand’s current anti-government protests and the US Embassy responding not once, but twice to growing awareness among the Thai public – Twitter moved to censor links to my Thai-centric blog, AltThaiNews.

Attempts to post on Twitter any link from AltThaiNews results in an error message noting that the link was blocked because Twitter determined it was “harmful.”

US Embassy denials of funding Thai anti-government organizations are as easy to debunk as simply visiting the US National Endowment for Democracy’s (NED) own official website and seeing core opposition groups listed directly on it.

The US NED is funding organizations supplying the protests with core leaders like Anon Nampa (listed as Union for Civil Liberty).

The US NED is also funding media platforms promoting the protests on a daily basis (Foundation for Community Educational Media also known as Prachatai) as well as organizations that supply actual protesters to the rallies themselves (listed as Thai Poor Act also known as Assembly of the Poor).

It is only a matter of time before similar measures are put into place on Facebook who together with Twitter banned my social media accounts on the same day in a coordinated act of censorship a while back.

That blogs simply exposing information found on the US government’s own official websites is grounds for censorship on Twitter and Facebook demonstrates that these US-based tech giants function more as propaganda tools, methods of managing public perception, and even weapons of information warfare than actual social media platforms used to connect people and share information.

The fact that Facebook and Twitter already censored me by deleting my accounts but still failed to prevent this information from reaching the public illustrates just how badly the West is losing the information war. The deleting of accounts, the blocking of links, and even Google erasing these blogs themselves will only lead to more innovative, effective, and most importantly – more determined efforts to overcome this censorship.

Since Facebook and Twitter are managing their platforms as weapons of information warfare, nations outside of the US and more specifically those targeted by US coercion and pressure should consider restricting or removing these services entirely from their information space and replacing them with domestic alternatives. This will not only help protect national security and stability but will create jobs and income that were otherwise previously enjoyed mainly by Silicon Valley.