HOME / WORLD / America’s Limited Wars – Are They Good for Israel 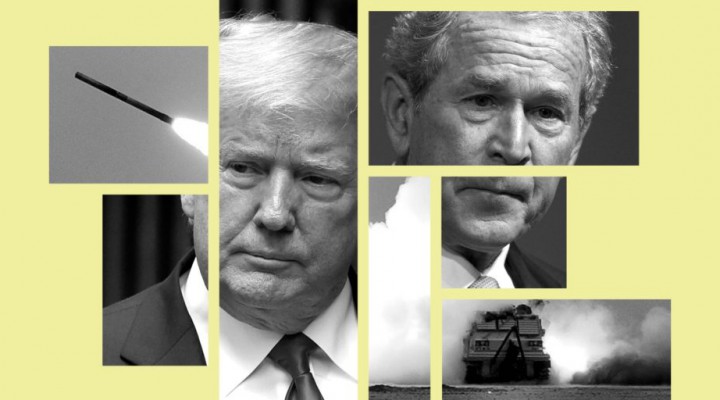 When is a war not a war? Apparently in the minds of some folks in Washington if it is a “single strike” or a “limited attack” it is really okay, with or without the consent of Congress as required by Article 1, Section 8, of the Constitution of the United States. The Founders had wanted to take away from the chief executive the ability to go to war, a power which the kings in Europe had abused, but the current rulers of America have chosen to ignore the wisdom of the framers of the Declaration of Independence and the Constitution. They have done so by wordsmithing what they are doing and somehow attacking another country has become generally regarded as not really war at all, just a reminder to bad guys of what Washington might be capable of if it really gets angry.

Even accepting that under the War Powers Act the president has the authority to respond to an imminent threat, the U.S. was hardly threatened by the Syrians on the two occasions when Trump has ordered drone strikes. Nor was Iran a threat two weeks ago when an attack on Iranian military installations was called off within minutes of being launched.

Laws or rules of war are, in reality, pretty much a fiction. Thucydides’ account of the Peloponnesian War includes the observation that “the strong do what they can and the weak suffer what they must.” The recent Iranian shoot-down of a U.S. navy reconnaissance drone brought out the worst in all-American chest thumping chauvinism. The New York Times’ leading Zionist columnist Bret Stephens called for an attack by U.S. forces to sink the Iranian navy. Senator Tom Cotton, a Trump ally, urged a “retaliatory military strike,” while Secretary of State Mike Pompeo warned that any killing of an American soldier or sailor in Syria or Iraq will be blamed on Iran and a U.S. military response will follow.

Bernie Sanders, in an interview with Margaret Brennan of CBS’s Face the Nation, had an interesting confrontation with Brennan over the language used to describe the aborted Iran attack. When Sanders correctly described the planned action as “war” Brennan objected, leading to the following exchange:

MARGARET BRENNAN: He was just doing a limited strike.

On the day after the attack was called off, Eliot Engel, Chairman of the House Foreign Affairs Committee, spoke with Jake Tapper of CNN saying:

JAKE TAPPER: “You think the President needs to come to Congress to get the authority to strike Iran if he wants to?”

ELIOT ENGEL: “Oh, absolutely. I think the President needs to come to Congress if … going to war with Iran. I mean, individual strike, we don’t want to tie the President’s hands. But in terms of going to war, we’re a co-equal branch of government, it’s very important that Congress have a say in it.”

Engel’s ignorance of the Constitution of the United States and the War Powers Act is profound. He is saying that an “individual strike” using the military is not war while also conceding that the president can start an armed conflict just because he got up on the wrong side of bed one morning. Eliot would not want to tie the president’s hands, perhaps recalling the heroic exploits of his own president Barack Obama, who destroyed Libya just because he felt it was the right thing to do.

Engel is, perhaps not coincidentally, a hard-core Zionist who tends to look at the Middle East through an Israeli prism. In opposition to most other Democratic congressmen, he voted for the Iraq war and against Obama’s Iran deal, both of which votes were in line with the Israeli government’s lobbying of Congress. For Engel, the first question is always “Is it good for Israel?”

And when it comes to going to war against the Muslim world, there is no one more up front than former Senator Joe Lieberman of Connecticut. Joe was interviewed by Israeli Army radio on the day after Trump canceled the Iran attack. He was troubled by Trump’s backing off from hitting Iran and advocated striking targets in the country that are both “visible and public.” He also expressed his hope that Donald Trump would quickly return to his policy of maintaining a hard line with Iran. Joe was not at all troubled about a retaliatory attack killing an estimated 150 people on the ground because “in war unfortunately people are killed, that’s just the way of the world.” Joe would, of course, prefer that non-Jews do the dying.

Perhaps the most bizarre summation of the case for America’s right to initiate what amounts to perpetual warfare came from James Jeffrey, the noticably demented U.S. Special Representative for Syria Engagement and Special Envoy to the Global Coalition. Viewing with disdain some of the Democratic presidential candidates’ calls for moving away from “endless wars,” he pounded the table while declaring “I get terribly worried. Because this shows total ignorance of what’s going on in the world today.”

He went on to opine in an interview with Defense One: “All of those candidates, in fact to a degree even more than most presidential candidates, embrace American values such as democracy, rule of law, divided government, free press, all of these great things. But let me tell you what I’ve learned in 50 years of experience. All those democratic values that we have done a great deal as a country to promote and to support around the world – and that’s a good thing, was a good thing – rest on a foundation. That foundation is an American-led global collective security system to fend off the predators that want to tear the system apart. Not just the military coalition, but the values that stand behind it.”

Jeffrey is perhaps a student of Secretary of State Mike Pompeo, who is uniquely convinced that the U.S. has been a force for good over the past twenty years. By that logic, the United States must accept the burden of being the global policeman to maintain wonderful democratic values. Interestingly, Jeffrey cites “rule of law” and “democracy” which are, of course, the first victims in any nation that believes itself to have a right to start a war whenever it sees fit.

What is more disturbing than Jeffrey, however, is the casualness displayed by media stars and politicians alike regarding what constitutes war by virtue of the broad acceptance of euphemisms like “limited attack” or “individual strike.” One recalls the euphemism frequently cited by the Pentagon during the Vietnam War when American bombers were blowing up villages, that the U.S. was invariably “exercising the inherent right of self-defense.” Rather than citing self-defense, it would be far better seeing Washington exercising some self-restraint for a change.

America’s Limited Wars – Are They Good for Israel?