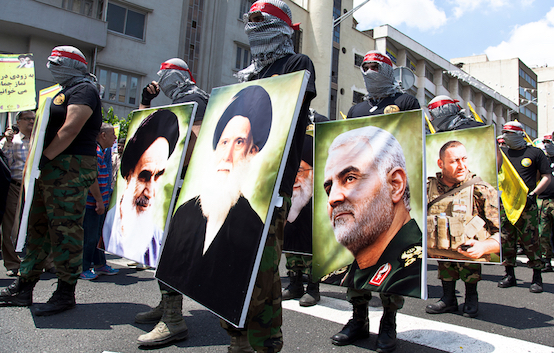 The International Atomic Energy Agency announced this week that Iran has exceeded the amount of low-enriched uranium permitted under the nuclear agreement—the one President Donald Trump withdrew from, but which our coalition partners are committed to keeping.

While Iran defends its actions by noting it is simply responding in kind to the decision by the United States to abandon the Joint Comprehensive Plan of Action (JCPOA) and re-impose economic sanctions, the fact is Iran’s enrichment gambit now puts it on a clear collision course with the Trump administration.

If Iran does not return to compliance, then there is a real possibility that the United States will launch military strikes against Iran’s principle nuclear facility in Natanz, thereby triggering an Iranian response which could propel the two nations into a major military conflict by month’s end. News reports over the weekend indicated that the United States has already launched cyber-attacksagainst the facility but Iranian officials claim they were unsuccessful,

But while the blame for a war with Iran would necessarily be shouldered by Trump, the reality is that the conditions that make this conflict possible were put in place by Trump’s predecessor, Barack Obama.

The threat of a U.S.-Iran war has been simmering for some time now. The shoot-down last month of an unmanned reconnaissance drone over the Strait of Hormuz by Iran brought that nation to the brink of war with the United States, with Trump only aborting a retaliatory attack at the last minute.

But any respite from the threat of a U.S.-Iranian conflict produced by the staying of Trump’s hand is illusory. The U.S. drone was shot down likely in the process of collecting intelligence that would be used to update lists of targets inside Iran that would need to be destroyed, neutralized or evaded in the event of any U.S. military action. The confrontation over the drone was not, in and of itself, the trigger for a U.S.-Iranian conflict, but likely part and parcel of plans already in the works. If that is the case, Trump’s decision not to launch a retaliatory strike wasn’t a signal of backing down, but simply a delay of the inevitable—unless of course there is a major change in the U.S. policy regarding Iran’s nuclear weapons program.

Trump and his national security team have made no secret of the fact that they view any effort by Iran to acquire nuclear weapons capability as a red line which, once crossed, would serve as a trigger for war. While under normal circumstances, such a presidential proclamation would be accepted as part and parcel of the kind of declaratory policy normally undertaken in support of nuclear nonproliferation. Trump, however, has issued his threat at a time when Iran was abiding by the terms of the JCPOA, which had been brokered by Trump’s predecessor, Obama, with the support of Europe, Russia, and China, and endorsed by the United Nations Security Council.

Under the terms of the JCPOA, finalized in 2015, Iran is permitted, under stringent monitoring by inspectors from the International Atomic Energy Agency, or IAEA, to engage in a wide range of nuclear activities related to its declared civilian nuclear power program. Since its implementation, the IAEA has consistently found Iran to be in compliance with its obligations under the JCPOA.

It was Trump’s decision to withdraw from the Iran nuclear deal, and not any nefarious activity on the part of Iran, which put the United States on the current hostile course with the Islamic Republic. While his many critics have condemned Trump’s decision as precipitous, the fact is that, upon closer examination, the JCPOA was a fundamentally flawed agreement that sustained fundamentally flawed assumptions in a manner which made its construct illogical and as such unsupportable in the long run.

When viewed in this manner, the JCPOA was little more than a politically expedient measure designed to extricate Obama from a foreign policy disaster of his own making, without resolving the critical issue at hand, namely the existence of an Iranian nuclear weapons program.

The JCPOA was designed to address the problem of the so-called “breakout window”—that is, the period necessary for Iran to produce enough fissile material to produce a single nuclear weapon. Prior to the JCPOA being finalized, the Iranian “breakout window” was estimated to be measured in terms of a few months, if not weeks. Under the terms of the agreement, the “breakout window” was recalculated at being at least one year. This was accomplished by restricting the number and types of centrifuges Iran can use to enrich uranium, the level of enrichment Iran is permitted to undertake (no more than 5 percent the level used to manufacture fuel for nuclear power reactors), and the amount of enriched uranium Iran is permitted to stockpile.

The U.S. need to restrict Iranian enrichment capability, however, had to be balanced with Iran’s right to enrich under Article IV of the NPT (Treaty on the Non-Proliferation of Nuclear Weapons,) which meant that the JCPOA operated under a sliding scale of restrictions that became less and less stringent over time. These restrictions, collectively referred to as the “sunset clauses,” would eventually be removed, leaving Iran with the ability to operate an unlimited number of advanced centrifuges, and produce an unlimited amount of uranium enriched to levels permitted under the NPT. In short, when the “sunset clauses” of the JCPOA expired, the one-year “breakout window” imposed by the JCPOA would be eliminated, with a new “window” in place measured in weeks.

The Achilles heel of the JCPOA was the fact that the United States had built a case against Iran’s nuclear program premised on the idea that Iran had been pursuing the development of nuclear weapons. While the JCPOA itself was constructed on the notion that this program had halted in 2003 (with some aspects having been kept in place until as late as 2007), and Iran and the IAEA resolved outstanding issues collectively referred to as “possible military dimensions” of Iran’s nuclear program prior to the JCPOA entering into effect, the United States has never recanted the flawed intelligence served as the basis of its original assessment that Iran had, at one time, been pursuing a nuclear weapons program.

Therein lies the Obama trap—so long as the U.S. intelligence underpinning its case that Iran had been pursuing a nuclear weapons program prior to the implementation of the JCPOA remains in place as the official position of the U.S. government, then logic dictates that the JCPOA is little more than a vehicle that allows Iran to assemble, unchallenged, all the means necessary to bring its dormant nuclear weapons program to fruition once the “sunset causes” of the JCPOA expire. This is the foundational argument put forward by Trump when challenging the viability of the JCPOA.

This situation could have been avoided had Obama predicated his decision to move forward with the Iran nuclear deal by ordering the production of a new intelligence estimate that rejected the unfounded claims put forward by previous editions. This Obama did not do, and the end result was an agreement which lent itself to be rejected by those whose political capital had not been vested in its survival, especially since its terms were not enshrined as a binding treaty, but rather through the vehicle of an executive order which could be rescinded at will by Obama’s successor.

For anyone who has studied Trump’s campaign rhetoric, the preferred policy regarding Iran’s nuclear program was, and is, a renegotiated JCPOA that rectifies the problems associated with the “sunset clauses.” The irony is that Iran was fully cognizant of the issues created once the sunset clauses expired and was prepared to discuss this issue with the United States and other parties to the JCPOA outside the framework of the nuclear agreement itself. This was something Trump wasn’t willing to do.

When Trump withdrew from the JCPOA, he firmly believed that a policy of “maximum pressure”—built around the renewal of U.S. economic sanctions—would compel Iran to come to the negotiating table. That hasn’t happened, and today the United States finds itself on the brink of a war with Iran with no discernible diplomatic off-ramp. Instead, Europe, Russia, and China have condemned the U.S. withdrawal from the Iran nuclear deal and, however unsuccessful so far, are seeking ways to bypass U.S. sanctions.

The recent decision by the Trump administration to prevent Iran’s ability to store excess heavy water produced through the uranium enrichment process in Oman, and to swap enriched uranium for unprocessed yellowcake with Russia, were designed to halt Iran’s enrichment activity by creating conditions which would put it in violation of JCPOA limits. Iran, however, has refused to play ball, and has set aside the restrictions it had agreed to under the JCPOA, accelerating its production of low-enriched uranium using modern, more efficient centrifuges. In short, Iran is no longer in technical compliance with the terms of the JCPOA (Iran contends it remains in legal compliance).

According to the calculus which underpins the JCPOA regarding the one-year “window of opportunity,” this means Iran is heading toward acquiring the very nuclear weapons capability Trump has indicated would constitute a case for war.

It is from this perspective that Iran’s downing of the U.S. drone must be viewed—not as a one-off incident, but rather the first round of an all-out conflict between the United States and Iran which, because of the inherent flaws of the JCPOA and Trump’s inability and/or unwillingness to work around them, have made a war all but inevitable.