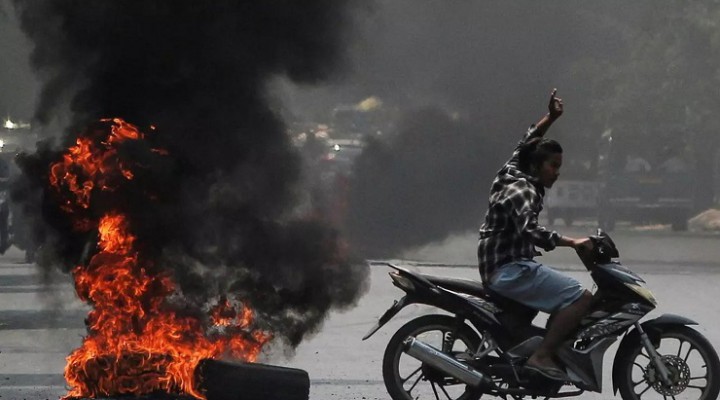 Violence between US-backed opposition groups joined with US-armed and trained ethnic rebels and the central government has become the focus of the Western media as well as Western government themselves.

Just as was the case in Libya in 2011, the US government, the Western media, and a global network of US-funded fronts posing as rights groups and nongovernmental organizations (NGOs) are attempting to make the case for intervening in Myanmar – first through sanctions and then eventually through the recognition of and providing direct support to a US-backed parallel government and the armed groups fighting on its behalf.

The goal of destabilizing Myanmar mirrors similar campaigns of propaganda, violence, and instability in China’s Xinjiang region, Balochistan in Pakistan, and virtually everywhere else China’s One Belt, One Road development project is active – to encircle China with chaos and contain China’s rise upon the international stage.

To sell yet another episode of US-engineered regime change around the world, the Western media is using 3 key talking points to pressure nations around the world and particularly in Southeast Asia – to aid in advancing US foreign policy objectives versus Myanmar.

Of course the violence should end. But the US government, Western media, and Western-backed fronts are referring only to violence carried out by Myanmar’s military and police.

No mention at all is made of opposition violence.

Just as the US and the Western media did during the “Arab Spring” in 2011, the 2014 US-backed overthrow of the Ukrainian government, or the more recent US-backed riots in Hong Kong – no mention at all is made of opposition violence.

Even as outlets like CNN admit in articles like, “Myanmar’s military is waging war on its citizens. Some say it’s time to fight back,” that the opposition is coming into possession of war weapons – the violence is still being depicted as “one-sided.”

This talking point is being repeated even by media, politicians, and diplomats across ASEAN.

However, if a problem is to be fully solved, it must be fully understood.

Condemning and stopping only half the violence amid an ongoing armed conflict is the same recipe for disaster used to destroy Libya, nearly destroy Syria, destabilize Ukraine, and leave nations like Yemen festering as massive and ongoing humanitarian crises for years to come.

2. “Democracy Must Return to Myanmar”

While Myanmar did indeed have elections which resulted in Aung San Suu Kyi’s NLD taking power – these are not elections that could – by any stretch of the imagination – be deemed “fair and free.”

The US and British governments have for decades poured money and political support into Aung San Suu Kyi’s political machine – both by directly backing the NLD as well as creating a massive nationwide network of fronts posing as NGOs to support the NLD before, during, and after elections.

The US government’s National Endowment for Democracy (NED) alone lists over 80 programs (that are admitted to) that form the core organizations making up Aung San Suu Kyi’s political base, interfering in areas ranging from media and lawmaking, to education and infrastructure, to political campaigning and polling, to economic affairs and resource management.

Aung San Suu Kyi herself has travelled to Washington DC specifically to meet with the US NED.

If unsubstantiated claims of “Russian interference” in America’s elections have created a political crisis with US politicians claiming American democracy is under dire, unprecedented threat, what sort of threat then does Myanmar’s democracy face with its main opposition party maintaining verified political and financial ties to a foreign power?

Thus “world opinion” is what the Western media says it is.

Only one side of the story is being told – Facebook, Twitter, Google via YouTube have seen to that after a coordinated campaign to purge the presence of Myanmar’s military and government from their platforms, as Forbes reported in their article, “YouTube Joins Facebook In Taking Down Channels Run By Myanmar’s Military In Coup Fallout.”

And as was the case regarding “WMDs” in Iraq in 2003, US military aggression against Libya and Syria beginning in 2011, the overthrow of the Ukrainian government in 2014, or even the recent unrest in Hong Kong and Thailand – the story being told about Myanmar by the Western media is based on verifiable lies and deliberate omissions.

We’re told that peaceful pro-democracy protesters are being brutalized by Myanmar’s military and police.

We’re not told that these protesters are the same groups who raided Rohingya communities in previous years, killing residents and burning businesses and homes to the ground and that they’ve been using the same level of violence more recently in the streets against state security forces.

We’re told that the leaders of the emerging “national unity government” created in parallel to Myanmar’s military-led central government is an attempt by Myanmar’s people to return democracy to the country.

We’re not told that key figures like “veteran democracy activist” Min Ko Naing had previously attempted to expel the nation’s Rohingya minority from the country, denying them as one of the nation’s ethnic groups – as noted even by Western-friendly publications like Frontier Myanmar in articles like, “Activists championed by rights groups have history of anti-Rohingya messaging.”

And of course, none of the information about Washington and its allies interfering in Myanmar for decades – including backing armed militant groups in Myanmar’s remote regions – is mentioned at all by the Western media. If it was, it would complicate the simplistic “good versus evil” narrative the West is using to sleepwalk the world into yet another regime change crisis.

If the world was told the truth about Myanmar, “world opinion” would be very different and Myanmar’s military attempting to maintain unity and control over the country versus foreign-funded opposition groups and armed ethnic separatists would be seen as an effort to avoid another Libya and Syria – and not the catastrophe the US claimed would happen if “the world” didn’t intervene – but the catastrophe that unfolded because the US sleepwalked the world into intervening.

0 thoughts on “Sleepwalking into Washington’s Next Regime Change Crisis: Myanmar”