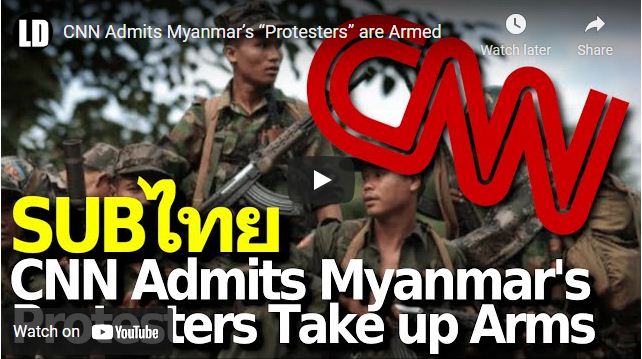 The Western media as well as US government-funded fronts inside Myanmar itself are now admitting that supposedly “peaceful protesters” are receiving war weapons and military training in their bid to oust the current government.

It has been pointed out that these protesters have been violent in previous years particularly regarding ethnic violence against the Rohingya – and that their most recent protests began with violence as well.

The Western media is following the same pattern of disinformation as with the Libyan and Syrian conflicts in 2011 – claiming extremists were “peaceful” until no longer tenable, then claiming they were “taking up arms” to “fight back” against government “brutality.”

CNN – Myanmar’s military is waging war on its citizens. Some say it’s time to fight back:
https://edition.cnn.com/2021/04/06/asia/myanmar-civil-war-ethnic-rebels-intl-hnk/index.html

Myanmar – Now – As slaughter of civilians continues, some decide it’s time to take up arms:
https://www.myanmar-now.org/en/news/as-slaughter-of-civilians-continues-some-decide-its-time-to-take-up-arms