HOME / WORLD / The US’ Support Of Tibetan Splittism Is Troublesome 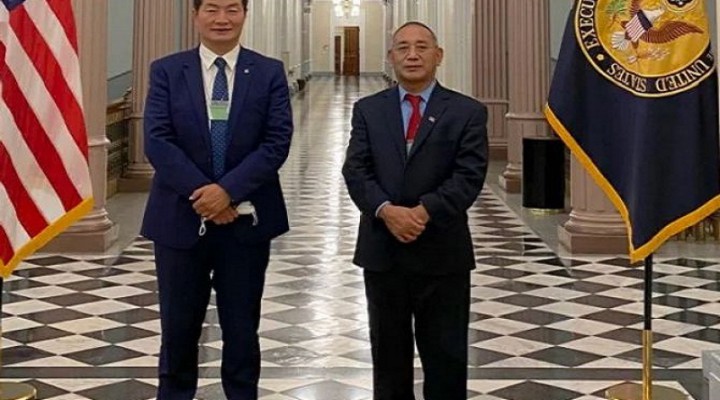 This is a very unfriendly move which hints that the President pays credence to Sangay’s claims of leading a so-called “government in exile”. In effect, it amounts to tacit support for his political agenda and hints that the US no longer abides by its One China policy.

The White House hosted Lobsang Sangay, the head of the self-proclaimed Tibet “government in exile”, on Friday. The media reported that it was the first time in six decades that the US government has done such a thing. This development is extremely troublesome because it shows that the Trump Administration is supporting splittism inside of China. It also suggests that the incumbent leader, who might lose his legal challenge to this month’s election results, is trying to further worsen relations with China before leaving office.

Tibet is an autonomous region inside the People’s Republic of China that was liberated by the central government in 1950. Prior to that point, radical religious leaders kept most of the population enslaved in a feudal system. The US subsequently supported Tibetan militants for the next 22 years until former US President Richard Nixon discontinued what was described as the “CIA Tibetan Program” when his country began its historic rapprochement with China.

Trump is endangering all of that by rolling out the red carpet for Sangay to meet with his Special Coordinator for Tibetan Issues. This is a very unfriendly move which hints that the President pays credence to Sangay’s claims of leading a so-called “government in exile”. In effect, it amounts to tacit support for his political agenda and hints that the US no longer abides by its One China policy. Truth be told, however, it had already violated this principle by selling arms to Taiwan and sending Cabinet-level officials there earlier this year.

But the Tibetan angle deserves special attention because of the role that it could play in American foreign policy. The US’ de-facto military alliance with India is a fait accompli in Asian geopolitics, and the Pentagon might hope to leverage it for the purpose of reviving the CIA’s Tibetan Program in the worst-case scenario. Thankfully the Indian government doesn’t seem interested in this for the time being at least despite hosting the Dalai Lama in Dharamsala.

Nevertheless, it’s difficult to discern what Trump’s end game is after undertaking this dramatic move. It’s unclear whether he’ll remain in office after January so he might just be trying to spoil any possible rapprochement between China and the US under a possible Biden Administration. If that’s the case, then the White House’s hosting of Sangay is just a political spectacle with no actual significance. Should his legal challenges succeed, however, then it might be very difficult for China to deal with the US after what it just did.

It’s one thing for countries such as China and the US to compete with one another in various spheres and another entirely for one of them to support splittism within the other like the US is doing against China with its latest move. Such actions must be condemned by the international community for the terrible precedent that they establish. It can’t be discounted that the US will support similarly separatist goals in other countries in the future if it’s willing to do so against China of all countries which is much more powerful than most. This alone shows how rogue the Trump Administration has become in what might be its final months in power.

Biden would do well to condemn Trump’s move if he’s sincere about improving relations with China should be succeed in taking office in less than two months’ time. Members of Congress should also voice their concerns too. This isn’t a partisan issue either since it’s the US’ official policy to recognize the unity of the People’s Republic of China. Trump is therefore tacitly breaking the US’ own policy by having the White House host Sangay.

With an eye on the future, the US needs to stop antagonizing China by hosting separatist leaders. It’s against international law and the US government’s own policy to do so. Trump seems obsessed with spoiling Biden’s possible presidency, especially as it regards bilateral relations with the People’s Republic. It’s too late for him to fix his legacy of ruining relations with China, but Biden could start building his own legacy by condemning Trump’s move and seeking to improve relations with China instead.

One thought on “The US’ Support Of Tibetan Splittism Is Troublesome”