HOME / WORLD / Who Is Behind The Milk Tea Alliance? 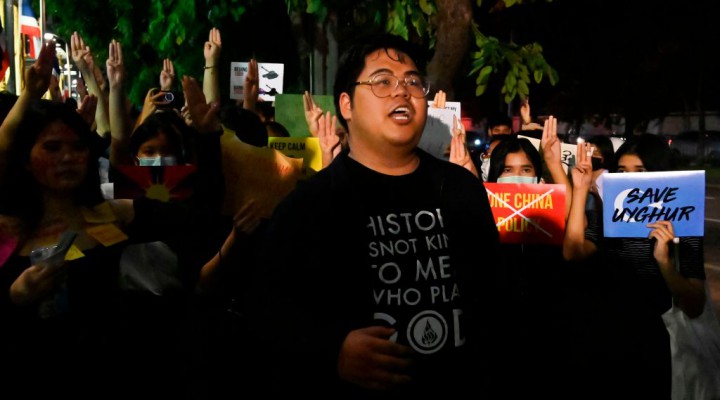 The Economist writes disapprovingly that the King of Thailand, Maha Vajiralongkorn, wants to restore an absolute monarchy. The article states that way back in 1932, revolutionaries proclaimed the end of Thailand’s absolute monarchy, and a monument was installed to mark the event. But in December 2018, it was removed. Last month, activists put up a plaque in the heart of Bangkok’s royal district as a sign of protest. “The people have expressed the intention that this country belongs to the people, and not the king,” the plaque said. A day later, it was gone. And like that, the author subtly moves on to current political events, noting that, after a few months of smouldering protests, they have escalated into large-scale demonstrations across the country. Despite the numerous arrests of protest leaders and the issuing of a special decree banning gatherings of more than five people in public places, the protests have continued. In response, the authorities have used water cannons and tear gas, and they have also restricted the press.

Another publication, The Guardian, writes that the youth of South Asia have been fighting tyranny. It also notes that events in Thailand are similar to what took place in Hong Kong in June 2019.

Tactics adopted from the demonstrations in Hong Kong have helped the movement survive following the arrests of its leaders and attempts by Thai Prime Minister Prayuth Chan-ocha to ban mass gatherings. Despite the fact that it is illegal to criticise the Thai royal family, students have decided to take the risk anyway. Thailand’s current king, Maha Vajiralongkorn, lives in Germany for most of the year and has been criticised for his indifference to the consequences of the pandemic and the worsening economic crisis at home.

Current events show that the protests are developing into something strange and monstrous. Thus, flags of Uyghur separatists, who staged a terrorist attack in Bangkok in 2015 that killed 20 people, were used at protests on 25 October.

Taiwan is getting involved, too. All three subjects have formed an international movement called the “Milk Tea Alliance”. The hashtag #MilkTeaAlliance quickly gained popularity back in April 2020, although it initially had nothing to do with political issues. It was the product of an internet war between pro-Chinese internet users and mainly Thai youth defending a well-known actor. It all began when Vachirawit Chiva-aree, or “Bright”, a Thai actor and star of the popular show “2gether”, retweeted a photograph in which Hong Kong was called a “country”. The actor apologised, saying that he had misread the caption. But Chinese internet users were not satisfied and switched over to the actor’s girlfriend. When one internet user praised her for looking like “a Chinese girl”, she replied: “A Thai girl”. It goes without saying that, for Chinese internet users, this was tantamount to an insult, and after she retweeted a post saying that COVID-19 may have originated in a Chinese laboratory, the criticism turned into hatred. The actor and his girlfriend quickly found support in other Southeast Asian countries, however.

The ensuing discussions and spread of memes evolved into extensive debates on China and on the support of democratic movements in Asia. Angry responses from Chinese internet users escalated the situation further, giving the dissenting camp even more reason to turn an ordinary hashtag into something like a political movement.

Hongkongers joined the movement from the get-go in support of the Thais. The debate on social media became even more widespread when Hong Kong activist and democrat Joshua Wong tweeted in support of Thailand on 12 April. He also mentioned that he had been put on a black list and even detained by Thai authorities in 2016 when he had travelled to Bangkok to give lectures at several universities.

At the end of the summer, Joshua Wong tweeted once again: “As situation in #Thailand turns critical, I hope all freedom-loving ppl can #StandWithThailand.”

Internet users in Hong Kong have generally been expressing their support for the Thai democratic movement since July, when protests first began in Thailand.

Taiwan has seen the emergence of the Taiwan Alliance for Thai Democracy. Its activists organised an event involving between 150 and 200 people, including NGO representatives and members of Green Party Taiwan. In their speeches, organisers outlined the history of authoritarian repression in Thailand from 1932 to the present day. The situation of political dissidents living in exile was also discussed.

In addition, protesters had a few demands for the Thai government: to dissolve parliament, to develop a new democratic constitution (without the involvement of the military), and to cease persecuting government critics.

Demonstrators in Taipei also expressed solidarity with their neighbours in Hong Kong, accusing Hong Kong’s leaders of systematically undermining freedom of speech and assembly as well as other rights guaranteed under the Basic Law. The organising group added that it hopes to “build pan-Asian solidarity against tyranny, especially against youth across the region”.

There is also the hashtag #StandWithThailand, which is being actively used in Hong Kong and Taiwan.

There is a chance that the process could gain support in a number of neighbouring countries. A Philippine Milk Tea Alliance Twitter account has already been created. It is worth mentioning that the Philippines has a territorial dispute with China in the South China Sea.

Internet users in India have also started showing an interest in the alliance. Despite the fact that the country’s social and economic situation is far from normal due to the negative impact of the pandemic and the failures of the Modi government to resolve a number of issues, the alliance seems appealing to India, primarily because it has an anti-Chinese focus. And recent border conflicts between the two countries are only encouraging Indian internet users towards such activism.

It seems that everything related to China or Chinese culture has come under attack from activists in the alliance. In September, they urged people to boycott the film “Mulan”, creating yet another hashtag – #BoycottMulan – on the internet. The film was actually made by a Disney studio in the US, however, rather than Chinese directors.

This paradox shows that Sinophobia has become widespread in a number of Southeast Asian countries. With such sentiment, it is very easy to manipulate public opinion by tossing in just the right anti-China stories.

The alliance is now starting to be associated less with pro-democracy activism and more with the anti-China symbol.

The Voice of America, however, is portraying the alliance as a solidarity movement that uses humour to fight for democracy and human rights.

It is clear that the alliance is beneficial to the West, especially the US, since it provides an additional reason for yet more democratic transitions, thus strengthening its influence.

Thailand’s Monarchy and Why the US Targets It

0 thoughts on “Who Is Behind The Milk Tea Alliance?”