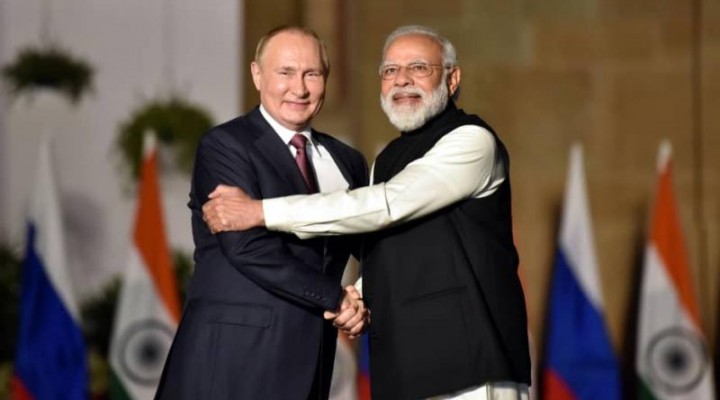 The de facto Russian-Indian hemispheric-wide “balancing” alliance that was agreed to during this week’s Putin-Modi Summit is one of the most significant diplomatic developments this century thus far. It’s truly a global geostrategic game-changer because of the irreplaceable role that it aims to play in the ongoing US-Chinese New Cold War.

Russian President Putin’s visit to New Delhi to meet with Indian Prime Minister Modi was a geostrategically game-changing development in the context of the ongoing New Cold War. The “Partnership for Peace, Progress, and Prosperity” that both sides agreed to amounts to a de facto alliance in all but name and builds upon their 1971 “Treaty of Peace, Friendship, and Cooperation” from exactly half a century ago. This 99-point document aims to align both Great Powers’ Eastern Hemispheric-wide “balancing” acts in order to maximally optimize their impact on shaping the dynamics of the emerging Multipolar World Order. It can be regarded as among the most important diplomatic developments of this century thus far and will likely remain relevant for decades.

The author outlined the contours of their complementary grand strategies in the following pieces:

* 16 May 2020: “The Prospects Of Russia And India Jointly Leading A New Non-Aligned Movement”

* 17 February 2021: “Why Structural Realists Are Wrong To Predict That Russia Will Help The US Against China”

What comes next is an oversimplified summary of the insight shared above.

Basically, Russia and India both aspire to “balance” the consequences of the primarily US-Chinese New Cold War, though they’ve thus far been going about it in different ways: Russia aligned closer to China while India did the same to the US. The mutual suspicions of each other’s grand strategic intent that this prompted were finally resolved earlier this year. Russia and India realized that they can do more if they coordinate their policies. This explains clause 93 of their reaffirmed partnership pact which declares that “The sides agreed to explore mutually acceptable and beneficial areas of cooperation in third countries especially in the Central Asia, South East Asia and Africa.”

That policy informally amounts to an attempt to organize a hemispheric-wide network of “non-aligned” states that share Russia’s and India’s interest in “balancing” between the US and China. In other words, it’s the prototype of the “Neo-NAM” that the author wrote about in May 2020 for the official journal of the Moscow State Institute of International Relations (MGIMO, which is run by the Russian Foreign Ministry). As he explained in the Indian military publication Force two months ago, this is aimed at enabling both Great Powers to flexibly adapting to the constantly changing geostrategic circumstances of the New Cold War through what’s described as their “bi-multipolarity” vision.

It’s crucial to clarify that Russia has no intentions of infringing on China’s interests even if some in India might secretly wish that it would or could at least be tricked into doing so. Rather, the Eurasian Great Power understands that it has the responsibility to play an irreplaceable role in pragmatically managing tensions between its fellow BRICS and SCO partners in order to counteract the US’ incessant attempts to divide and rule them. Moscow appears to have accepted that if this rivalry won’t go away for some time, then the Kremlin must seek to ensure that it doesn’t lead to another Galwan-like conflict which could escalate into an all-out conventional war in the worst-case scenario.

With this in mind, Russia is practicing what can be described as “military diplomacy”, or the use of military means to achieve political ends. In this case, it’s exporting equally strategic and high-quality arms to rivals China and India in order to maintain the balance of power between them with a view towards subsequently encouraging them to settle their disputes through political means instead of military ones. This contrasts with the American practice of “military diplomacy”, which attempts to give its preferred partner in any pair of rivals the military edge in order to encourage aggressive attempts to resolve existing disputes in a unilateral way instead of via a series of political compromises.

The Kremlin’s calculation is that if India is going to arm itself to the teeth anyhow, then it’s better for it to do so with Russian arms than American ones. While China might understandably feel uncomfortable with India’s massive military buildup, it seems to quietly prefer for this to be aided by Russia than the US if it’s seemingly inevitable. That could in turn enable Moscow to more effectively manage Washington’s pernicious divide-and-rule influence over New Delhi and thus hopefully stabilize Eurasian affairs. Proof of this concept in practice was seen late last month during the Russia-India-China (RIC) Foreign Ministers meeting that went ahead despite existing Chinese-Indian tensions likely due to Russia’s mediating role.

China doesn’t believe in posing zero-sum choices upon its partners like the US does, but it’ll increasingly be compelled by the New Cold War’s American-influenced hyper-competitive dynamics into accepting that third countries are being pressured to choose between Beijing and Washington. This could place those states in very challenging positions since their cooperation with China is mutually beneficial yet they also fear the US’ Hybrid War wrath if they don’t submit to America’s demands to distance themselves from the People’s Republic as evidenced by the high-profile example that Washington is trying to make out of Ethiopia after its principled refusal to do so.

What’s urgently needed is a “pressure valve” for providing such countries with a so-called “third choice” whereby they can hopefully strike a balance between both superpowers without inadvertently offending one or the other. Therein lies the grand strategic significance of the Neo-NAM that the author proposed be jointly led by Russia and India. The first-mentioned is perceived as close to China while the second is seen as closer to the US, yet they’ve nevertheless proven their strategic autonomy through the latest Putin-Modi Summit. Russia continues to arm India to the teeth despite China’s concerns while India continues purchasing Russian arms despite the US’ sanctions threats for doing so.

Their declaration of intent to cooperate in third countries across Central Asia, Southeast Asia, and Africa significantly involves the greatest theaters of rivalry in the US-Chinese New Cold War and can thus enable these two Great Powers to maximally optimize their complementary hemispheric-wide “balancing” acts. There’s also the chance that they’ll expand their cooperation to include West Asia considering the close relations that they each enjoy with Iran, “Israel”, and the UAE. When one remembers that they also pledged to work closer together in the Russian Arctic and Far East regions, it can be seen that their de facto “balancing” alliance truly encompasses the entire Eastern Hemisphere.

While it might not have much of a direct impact on Europe in Western Eurasia, it does indeed have a very influential one when it comes to its indirect consequences. The North-South Transport Corridor (NSTC) between them through Iran and Azerbaijan aims to facilitate EU-Indian trade via Russia while the possible expansion of the Vladivostok-Chennai Maritime Corridor (VCMC) to include the Northern Sea Route (NSR) through the Arctic for connecting the Atlantic and Pacific Oceans could achieve this economic end through maritime means for complementing the NSTC’s mainland component.

Towards A Russian-American “Non-Aggression Pact”

Some skeptics might question the political viability of Russia facilitating EU-Indian trade (whether through mainland or maritime means) considering the heightened tensions between Moscow and the West, but it’s here where they should contemplate the intention behind the last two Putin-Biden Summits. They’re aimed at responsibly regulating their rivalry so that they can ultimately reach a so-called “non-aggression pact”. This outcome would be mutually beneficial since it would enable the US to redirect more of its military and other resources to the “Indo-Pacific” for more aggressively “containing” China while restoring EU-Russian relations for improving one another’s struggling economies.

The US’ Anti-Russian “Deep State” Faction

This scenario remains dependent on the Biden Administration’s ability to manage the anti-Russian faction of the US’ permanent military, intelligence, and diplomatic bureaucracies (“deep state”) that’s trying to sabotage those two’s hoped-for “non-aggression pact” by leveraging its network of influence in the Baltic States, Poland, and Ukraine in order to provoke another East-West crisis. Right now, its anti-Chinese rival is predominant with respect to formulating the US’ grand strategy as evidenced by the last two Putin-Biden Summits. This change in the US’ “deep state” dynamics was former US President Trump’s most enduring legacy and was inherited by Biden as was just argued.

Back to the topic of this analysis, the de facto Russian-Indian hemispheric-wide “balancing” alliance that was agreed to during this week’s Putin-Modi Summit is one of the most significant diplomatic developments this century thus far. It’s truly a global geostrategic game-changer because of the irreplaceable role that it aims to play in the ongoing US-Chinese New Cold War. It’s of the highest importance that observers acknowledge this emerging reality in order to formulate the most effective policies for their countries to adapt to it. The Russian-Indian axis is now one of the most important in the world and will likely remain so for decades, perhaps even for the rest of the 21st century.