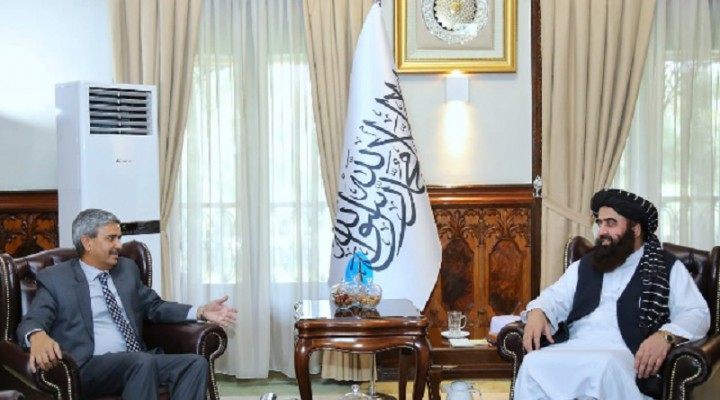 Neither has anything against Pakistan per se, it’s just that they don’t believe that any given actor should be disproportionately dependent on a single partner like many assumed that the Taliban was via Pakistan.

Indian diplomats just held their first formal meeting with Taliban officials to discuss bilateral ties and the resumption of Delhi’s socio-economic projects in Afghanistan. This development was a long time in the making and marks India’s return to the same country that its diplomats fled from last August. Although Delhi doesn’t recognize the legitimacy of the Taliban’s self-proclaimed government, it’s still pragmatically engaging with that movement in pursuit of mutual interests. First and foremost, these concern the reestablishment of Indian influence in Afghanistan, which Delhi regards as providing it “strategic depth” vis a vis Islamabad while the Taliban considers closer ties with India as a means of “balancing” its traditional ties with Pakistan.

India’s interests are self-explanatory while the Taliban’s require some further clarification. While many wrote them off as Pakistani proxies for the past two decades, the reality was always a lot more nuanced. The Taliban is fiercely independent and resents being dependent on anyone, with Pakistan being no exception. They appreciate the political and other speculative forms of support that Islamabad provided them over the years but never intended to become indebted to it. This explains why they retain ties with the Tehreek-e-Taliban Pakistan (TTP, the “Pakistani Taliban”) despite it being designated as terrorists by Islamabad. In fact, the latest UN report on Afghanistan acknowledged that this group gained the most out of anyone from the Taliban’s return to power in Afghanistan.

The Taliban’s political patronage of the TTP enables it to exert leverage over Pakistan, hence why it’s mediating between those two and recently helped them agree to extend their ceasefire, all with a view towards making themselves less dependent on Islamabad. With that in mind, the timing of Indian diplomats’ meeting with their movement probably wasn’t a coincidence since it came after the Taliban proved its independence vis a vis Pakistan. Furthermore, closer Indian-Taliban ties and the resultant restoration of Indian influence in Afghanistan will solidify the group’s strategic autonomy, which is also in Delhi’s interests too. Not only that, but Russia and Iran are certainly celebrating this as well since they also want to see India return to that country in order to bring balance to the Taliban’s foreign policy.

Neither has anything against Pakistan per se, it’s just that they don’t believe that any given actor should be disproportionately dependent on a single partner like many assumed that the Taliban was via Pakistan. Furthermore, they’re both in favor of India playing a larger role in Eurasia since they expect that to bolster the multipolar dimension of its foreign policy and thus counterbalance the unipolar aspect with respect to Delhi’s close ties with the US-led West that are driven by both sides’ shared desire to “manage” China’s rise. India’s return to Afghanistan can only be sustainably accomplished by both countries working closer with Iran, which implies that the Chabahar project might become much more important since it represents the only way to link those two together.

Russia probably expects that the restoration of Indian influence in Afghanistan will strengthen Delhi’s Central Asian policy, which will in turn enable Moscow to indirectly “balance” Chinese influence there via India. Beijing’s role in the region has been growing for decades and is set to become even more pronounced as it pioneers overland connectivity with the Islamic Republic via those former Soviet ones. Without India “balancing” China in a friendly, gentle, and non-hostile way, Russia might fear that it’ll inevitably lose its historical influence in Central Asia, which could result in lost trade with time and therefore harm its budgetary revenue that’s already taken a major hit after the US-led West seized approximately $300 billion of its foreign reserves earlier this year.

If Russia and India were to participate in joint projects, however, then Moscow could retain its influence and especially the economic aspect thereof in the face of stiff competition from China. Since Afghanistan is of grand strategic importance for India, the Kremlin likely expects Delhi to incorporate that country into its larger Central Asian policy, hence its tacit support for India’s return there. Iran, as explained, stands to profit from facilitating Indian-Afghan trade via the Chabahar Corridor, all of which will collectively strengthen their joint efforts to assemble a third pole of influence in the present bi-multipolar intermediary phase of the global systemic transition. The Taliban, meanwhile, benefits from maximally strengthening its strategic autonomy by reducing its speculative dependence on Pakistan.

As for their traditional patrons, they’re in the midst of one of their worst-ever political crises caused by the scandalous ouster of former Prime Minister Imran Khan in early April. Pakistan’s military and intelligence structures, which are referred to as The Establishment in that country’s parlance, are still fulfilling their duty defending the country’s objective national interests. In fact, Pakistan reportedly bombed TTP terrorists in Afghanistan in mid-April, so it’s clearly not distracted by its domestic crisis to the point of neglecting its national security interests. Nevertheless, Pakistan appears unable to restore its lost influence over the Taliban that’s been slipping further away since that group returned to power in August, with India’s restoration of influence in Afghanistan only accelerating this trend.

Under such circumstances, the best that Pakistan can do is learn to live with this new reality, which actually isn’t all that new to be honest since it’s simply a return to the way that things have been over the past two decades. Still, it’s the opposite of what many in the country expected after the Taliban swept back into Kabul ten months ago, especially with respect to that group politically patronizing (at the very least) TTP terrorists. Islamabad’s security concerns might be further heightened by India’s return to Afghanistan considering its belief that Delhi supports that group as anti-Pakistani proxies. It might perhaps have been with that scenario in mind that Pakistan initially asked the Taliban to mediate peace talks with the TTP and got it to agree to extending the ceasefire.

For these reasons, while Russia and India will celebrate India’s return to Afghanistan, Pakistan will view it with the utmost suspicion but nonetheless won’t be able to do anything about it. The Russian-Indian-Iranian multipolar axis will continue to strengthen in the Eurasian Heartland, especially if Delhi uses Afghanistan as a springboard for the next phase of its Central Asian policy, which Moscow would certainly support in order to “balance” Chinese influence there in a friendly, gentle, and non-hostile way. Iran expects to profit from the role that the Chabahar Corridor is expected to play in facilitating Indian-Afghan trade as well as India’s trade with the rest of Central Asia. In response to this emerging geostrategic reality, Pakistan might be compelled to recalibrate its policy towards the region.

Everything’s Getting Messy Again In Afghanistan

Will the Islamic world save Afghanistan?