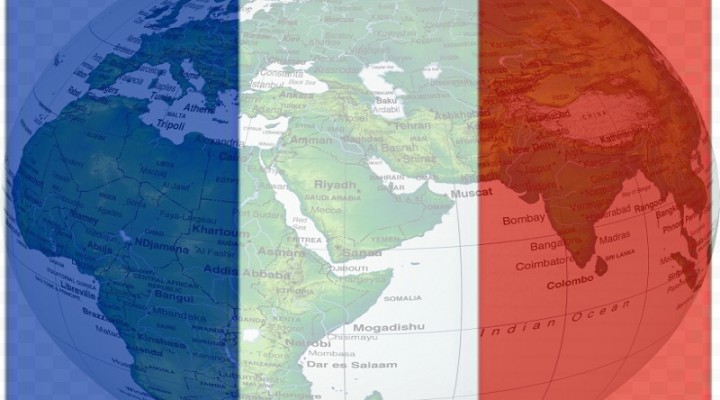 France should embrace the multipolar trend of mutually beneficial cooperation in order to sustain its existing influence in parts of Afro-Eurasia as well as pragmatically expand it into new regions.

France envisions itself remaining an influential Great Power all throughout the 21st century, to which end it’s in the process of formulating a grand strategy for advancing such an aim all across Afro-Eurasia during this time. Paris’ Indo-Pacific strategy was unexpectedly sabotaged by its allies in Canberra and Washington as a result of last month’s surprise AUKUS announcement with London. France not only lost out on an AUS$90 billion submarine deal with Australia, but just as importantly, it can no longer rely on the continent-sized country as its top regional partner. In response, France has sought to replace its role with India in this geostrategic space.

Moving westward, the next region where France sees itself exerting pivotal influence is the Eastern Mediterranean. Greece plays the role that Australia was supposed to play for it in the Indo-Pacific but which India will now fulfill. Instead of seeking to balance China, France is focused on balancing Turkey in this geostrategic space. It hopes to lead a coalition of like-minded states from whom it can then extract economic and investment privileges in exchange for its military and strategic cooperation in containing this shared perceived threat.

Africa forms the last front of France’s 21st-century grand strategy, and it’s here where the Western European Great Power has the greatest advantage for historical reasons. Although Russia has made impressive inroads in the formerly colonized region that France refers to as “Françafrique” and considers to be its exclusive “sphere of influence”, Paris hopes to rely on its decades-long allies in Chad to push back against this trend. Quite arguably, France should probably be more concerned about Turkish influence in “Françafrique” than Russian, but in any case, it hopes to regain its lost strategic ground here in the next few years.

The commonalities connecting French grand strategy in the Indo-Pacific, Eastern Mediterranean, and “Françafrique” are several. First, France has historical influence in each of these spaces. Second, there’s a rising power that it aims to contain. And third, France hopes to rely on like-minded regional countries in order to achieve the aforesaid goal. There are also several challenges, however. First, France’s historical influence in these regions has eroded. Second, not every regional country wants to contain the rising power that France considers a threat. And third, its partners might not sacrifice their own interests for this end.

What this means in practice is that France cannot fully rely on India, Greece, and Chad to contain China, Turkey, and Russia/Turkey in the Indo-Pacific, Eastern Mediterranean, and “Françafrique” respectively. Paris can arm each of them and entice them with certain economic incentives to play a greater role in this regard, but it must acknowledge its comparatively less influential balancing capabilities when compared to China’s, Russia’s and Turkey’s. France is a military power with an impressive economy, soft power appeal, and historical influence across Afro-Eurasia, but its diplomatic balancing capabilities don’t match these.

That’s the primary problem for Paris since it doesn’t have experience practicing such a balancing policy. All that it knows how to do is exert hegemonic influence through junior partners and comparatively lesser proxies. It’s already accepted the erosion of its influence in each of those three earlier mentioned spaces and is only now belatedly trying to regain it due to the dynamics of the New Cold War. France’s imperialist hubris blinded the country’s strategists to their own shortcomings that were responsible for these earlier setbacks. Without learning from these lessons, their envisioned grand strategy will never be practiced to its full potential.

The first lesson is that France’s domination of its smaller regional partners resulted in them reaching out to Paris’ perceived rivals as a form of pressure relief aimed at ultimately enhancing their strategic autonomy. It wasn’t due to any “conniving” on China, Turkey, or Russia’s/Turkey’s part in those regions that these countries made their respective inroads in recent years since France’s partners there (both prior and existing) voluntarily cooperate with them. France should respect its smaller regional partners’ sovereign interests in order to not inadvertently compel them into counterbalancing it so actively.

The second lesson is closely connected to the first and most applicable in “Françafrique”. It’s that France continues to believe in its self-assumed “cultural superiority” as the soft power basis for maintaining its influence. Many Africans speak French because of the legacy of colonialism, not out of any particular attraction to that language. They also migrate to France for economic reasons, not because they like its culture more than their own. France’s belief in its “cultural superiority” is unofficially a major part of that country’s identity but it comes off as arrogant, condescending, and even racist. This leads to it losing considerable hearts and minds.

Next, France must treat all of its partners with equal respect, which can only come from learning the first two lessons. This also includes comparatively larger ones like India. While some of their leaderships might have self-interested personal motivations for partnering with Paris against third countries, that Western European Great Power shouldn’t lose sight of the fact that there are still presumably some patriotic members in their permanent military, intelligence, and diplomatic bureaucracies (“deep state”). These forces might resist their leaderships potentially endangering national security by militarily provoking others at France’s behest.

Building upon that lesson, France shouldn’t take its partnership with any country for granted. Patriotic members of their “deep state” might seek to stop their leadership’s reckless endangerment of national security, including through coups. There’s also the chance that these same forces could provoke patriotically driven Color Revolution unrest against their French-backed puppet leaderships. France also shouldn’t discount the possibility of its nominal American and British allies “poaching” more of its partners, including by bribing those same corrupt leaders personally beholden to Paris.

Another lesson is that France must no longer remain under the illusion that exclusive “spheres of influence” exist, especially not in “Françafrique”. It’s inevitable that Paris will have to accept other countries’ influence in the areas that it used to regard as solely under its own sway. This includes both “allies” like the US and perceived rivals like China, Russia, and Turkey. France should then consider pragmatically ceding some of its prior influence in manageable ways in order to form more effective partnerships with its allies as well as explore creative means for entering into rapprochements with perceived rivals.

This brings the analysis along to the final lesson, which is that zero-sum competition is counterproductive and outdated. France should embrace the multipolar trend of mutually beneficial cooperation in order to sustain its existing influence in parts of Afro-Eurasia as well as pragmatically expand it into new regions. Clinging to its currently very competitive outlook on everything will only result in failing to learn the earlier mentioned lessons and thus repeating the same mistakes that are responsible for France losing its influence in those geostrategic spaces in the first place.

Is The Guinean Coup A Pro-French Power Grab Against A Russian-Friendly Leader?