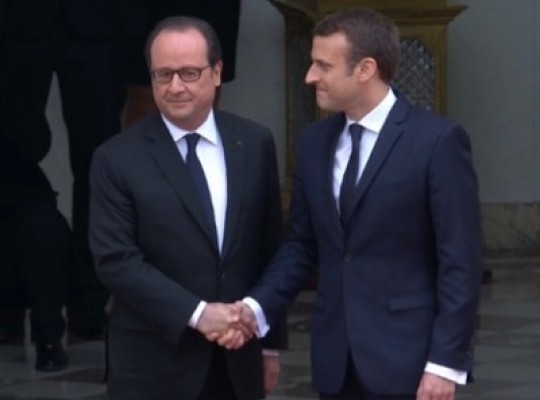 We are finishing the publication of the second part of Thierry Meyssan’s book, “Before our very eyes”. In this episode, he reviews the amateurism of the last French presidents, on the advice of the few supporters of colonialism, and on the disaster they caused.

The Hollande government was stunned when it learned, in September 2015, of the Russian military deployment. It had never imagined it although Russia and Syria had been preparing for three years. It would be even more surprised, in August 2016, when Russia installed another base, this time in Iran. Yet this had been concerted for a year.

The Russian army presents many new weapons and uses the battlefield to promote its defense industry. In a few months, it destroyed one by one all the bunkers and fortifications that Lafarge and NATO had built. However, Paris did not immediately understand what was going on, especially since Washington was not quick to let it know. Russia had installed in Latakia a system that inhibits NATO’s controls and commands [1]. The Alliance becames deaf and blind within a radius of 300 kilometers. Moreover, when its planes crossed the zone, they could no longer operate their weapons [2]. In order to allow international actors to verify the effectiveness of this new kind of weapon, Russia carried out tests over Lebanese and Cypriot space (including the large British military base) [3], and then in Iraq.

The same system is deployed in Crimea and Kaliningrad. In fact, as NATO’s Supreme Commander has acknowledged, Russia has become the leading conventional military power ahead of the United States. Paris is falling back on the Juppé / Davutoglu project while participating in the [US] International Coalition against Daech. The latter publishes triumphant communiqués of its bombings against the jihadists. However, on the ground, many witnesses testify that it is not fighting Daech, but rather dropping weapons and ammunition on it, while the Syrian Arab Republic is sending the UN lists of oil and gas installations that the Coalition is destroying, with a view to subsequent reparations.

The Russian economy has suffered greatly from European sanctions during the Ukrainian conflict, and Moscow cannot continue its bombing campaign indefinitely. While it should have stopped on January 6 (date of Orthodox Christmas), it continued until mid-March.

The French leaders, thinking only in terms of interests, were convinced that the Russians had only come to Syria to fight the jihadists and extend their zone of influence. They interpreted the religious symbols that Moscow wielded as internal communication devices. It never occurred to them that anything else could move a great nation like Russia. 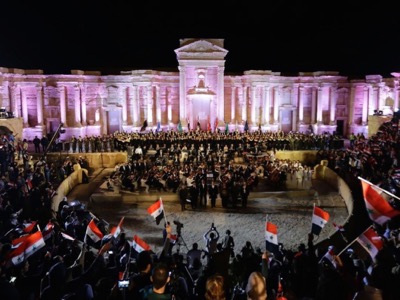 The ancient “Silk Road” connected Iran to the Syrian coast through Iraq and on to Palmyra. It is geographically impossible to open other major communication routes through the desert. As a result, the city has become a central issue in the Syrian war. After being occupied for a year by Daesh, it was liberated by the Syrian Arab Army. It hosted two concerts, televised in Syria and Russia, to celebrate the victory of civilization over terrorism (…and its sponsors).

Syria and Russia’s struggle for civilization is celebrated, on May 5 and 6, 2016 (Syrian Army and Allied Victory Against Nazism holidays), at concerts in liberated Palmyra. Presidents Vladimir Putin and Bashar al-Assad both speak on a giant screen while symphony orchestras play amidst the ancient ruins. The “city of the desert” embodies the ancient resistance of the peoples of the Levant to Roman imperialism. It is also one of the most strategic places of the war: it had been occupied by Daech.

Before withdrawing its bombers, Moscow signs an agreement with the State Department. The United States swore that they were acting in good faith and claimed not to know what Jeffrey Feltman was doing with Daech from the UN. John Kerry and Sergei Lavrov therefore decided to resume the Geneva negotiations. They agreed to impose a ceasefire on both sides – excluding the “terrorists” -, to deliver humanitarian aid to the besieged populations and to form the next Syrian government themselves; good resolutions that did not last long.

In May 2017, the French, scalded by the catastrophic mandates of Nicolas Sarkozy and François Hollande, chose an unknown, Emmanuel Macron as president. A senior Treasury official, having made a notable detour through the Rothschild bank, he is a “mandarin”, with no political party, but who represents the 300 members of the General Inspection of Finance. As such, he knows nothing about international politics. He therefore relies on a few advisors, some of whom shamelessly display in their office at the Élysée Palace the certificate of competence they received from a foreign authority, the US State Department.

Out of nowhere – he had resigned from his position at the Élysée and was destined to become a professor at the London School of Economics and the University of Berlin – he was suddenly appointed Minister of the Economy and received strong support for his election campaign. He seems to have benefited above all from the help of his friends Henry and Marie-Josée Kravis, the reference shareholders of one of the largest investment funds in the world, KKR [4].

The former CIA boss, General David Petraeus, is putting himself at the service of the ultra-billionaire Henry Kravis.

President Macron wants to maintain good relations with all. So he begins his term with a few words in favor of restoring diplomatic relations with Damascus and sends emissaries to Syria. To his great surprise, they were not received by President al-Assad. The latter told them that he would only accept a French embassy when Paris had stopped its military support to the jihadists. Emmanuel Macron then discovered the extent of France’s secret involvement in this war. 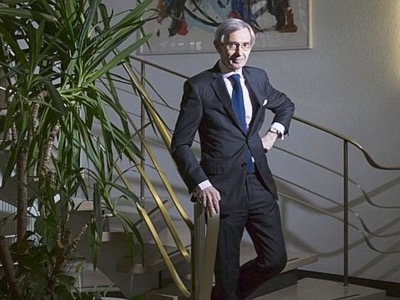 Trained in Washington, ambassador Michel Duclos is one of the main relays of Western warmongering in French diplomacy.

In the end, after having made pro- and anti-Syrian statements “at the same time”, he did a third thing. On the advice of Michel Duclos, he left the Syrian file to his Minister of Foreign Affairs, Jean-Yves Le Drian. The latter, when he was Minister of Defense under François Hollande, pushed more than any other for the destruction of the Syrian state. Michel Duclos is a neo-conservative, special advisor to the Montaigne Foundation and the Atlantic Council. He was ambassador in Damascus where he befriended great Sunni bourgeois secretly members of the Muslim Brotherhood.

He only accidentally became interested in Syria again, via the Lebanese dossier. Successively, popular protests against the political class (October 2019), a banking crisis (November 2019), a health crisis (July 2020), an explosion at the port of Beirut (August 2020) caused a sudden disappearance of the middle classes and a general decline in the standard of living of around 200% [5].

Explosion of a new weapon in Syria. It caused a tactical mushroom cloud.

Double explosion in the port of Beirut. One of them causes a tactical mushroom cloud.

President Macron visits Beirut twice after the explosion at the port. The first time he was greeted by a petition, orchestrated undercover by the DGSE, demanding the restoration of the French “mandate” over the country. The second time he celebrated the centenary of the proclamation of Greater Lebanon by General Henri Gouraud, leader of the French Colonial Party [6].

Asked by President Michel Aoun to reveal the satellite photos of the explosion at the port, he never followed up. The disaster corresponded to the overflight of Beirut by two unidentified fighter-bombers. The explosion had caused a “mushroom cloud”. Three embassies had immediately taken air filters from the vehicles present at the scene and had them analyzed in their respective countries. They are now convinced, as well as the Lebanese army, that the explosion was caused by a tactical nuclear missile. However, the judicial investigation persists in pursuing false leads, just as it did in the assassination of Rafik Hariri.

In the end, French claims to re-colonize Lebanon in the absence of Syria came up against the US plan to partition Lebanon [7] and Israel [8], and then against the agreement reached between Presidents Biden and Putin [9].

It is a mistake to speak of French policy in the face of the “Arab Spring. First, because Paris did not understand who was causing the events, nor why, and second, because successive French governments have never sought to defend the interests of their country. At most, we can see the erratic behavior of France, looking for good opportunities for its leaders to make easy money.

On this subject, as on many others, the distinction between right and left is meaningless. Nicolas Sarkozy, Alain Juppé, François Hollande and Laurent Fabius have carried out the same “privatization” of national policy, even if President Sarkozy was more flexible and stopped attacking Syria when he understood the impossibility of victory. On the other hand, there is a colonialist/anti-imperialist cleavage within almost every political party and a few men who have tried to save the country’s honor. 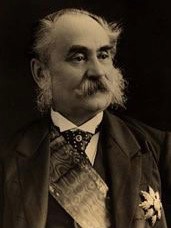 François Georges-Picot (1870-1951) drew with his Whitehall colleagues the map of the present-day Middle East. A tutelary figure of the Colonial Party, he was the great-uncle of President Valéry Giscard d’Estaing (1926-2020).

The bottom of the contradictions of French foreign policy was expressed by former President Valéry Giscard d’Estaing, in Le Parisien of September 27, 2015 [10]. Giving his support to his left-wing successor, this right-wing man said, “I wonder about the possibility of creating a UN mandate on Syria, for a period of five years”; an elegant formula to reintroduce the mandate exercised by France, with the approval of the League of Nations, from 1920 to 1946. The mandate was a politically correct expression to designate the colonization of Syria, as planned during the First World War by Sir Mark Sykes, François Georges-Picot and Sergei Sazonov, representing respectively the United Kingdom, France and the Tsarist Empire (the “Sykes-Picot agreements”). Now, and this is no coincidence, Valéry Giscard d’Estaing is the first cousin of François Georges-Picot.

In a court of law, if there were to be a Nuremberg for them, the members of the Sarkozy administration would have to answer for the privatization of national policy and for the 160,000 deaths of the operation in Libya (figure established by the International Red Cross). Of course, they would share this responsibility with others, mainly Americans, British, Qataris and Turks. They would, on the other hand, be given a clean slate for their crimes in Syria, given their reversal in February 2012 and their peace agreement with the Syrian Arab Republic. The Hollande administration and its accomplices should be held accountable for the 300,000 Syrian deaths (figure established by the UN Secretary General) and the 200,000 to 300,000 jihadists they supported and who were also killed (assessment established by the Syrian and Iraqi Arab armies).

France and its allies should be held responsible for the events they have caused. The question of whether or not the French people were aware of the crimes committed in their name is irrelevant: in a democracy, every citizen who says nothing shares the responsibility exercised by the leaders they elected.

The French and their allies should pay for the destruction of two thirds of Syria (at least 300 billion dollars, according to the World Bank), including almost all the oil and gas infrastructures as well as a large part of the ancient monuments.

[5] “Who is Destroying Lebanon and Why?”, by Thierry Meyssan, Translation Roger Lagassé, Voltaire Network, 22 December 2020.

[9] “Towards a neutral Lebanon under US-Russian tutelage and Syrian administration”, Voltaire Network, 1 July 2021.

0 thoughts on “France : from colonial fantasy to disaster-17”